Karen B. Stern: Writing on the Wall. Graffiti and the Forgotten Jews of Antiquity, Princeton / Oxford: Princeton University Press 2018 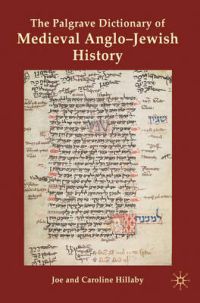 Anyone working in the field of medieval Anglo-Jewish history will know of the work of Joe Hillaby. His books and very long list of articles betray his intimate knowledge of English localities and the many ways Jews made their presence felt in medieval England. Hillaby is, therefore, the perfect person to undertake the huge project of putting together a dictionary of Anglo-Jewish History. In this project he has teamed up with his wife whose photographs make a significant contribution to the volume.

The design of the volume chimes well with developments in the wider field of medieval Jewish History in which increasing emphasis is put on grounding the experience of Jews in the Middle Ages firmly within the framework of the general history of the period. And it resonates well with the growing realisation that the history of the Jews is an integral part of the history of medieval Europe. The Palgrave Dictionary of Medieval Anglo-Jewish History aims to offer its readers the opportunity to situate the lives of Jewish men and women in the medieval English localities they inhabited.

After a brief and generalised introductory note on the outlines of the history of the Jews of England from their arrival with William the Conqueror in England from Rouen in 1066 to their expulsion by Edward I in 1290, the volume gives an annotated list of translations of the 'Statutory and other Key documents' concerning the Jews. The section opens with O'Brien's work on the so-called Leges Edwardi Confessoris ('The laws of Edward the Confessor') of the second half of the 1130s which concern royal authority over the Jews of England. It closes with documents concerning the expulsion in 1290. It includes the remonstration of the Jews against the provisions of the Statute of the Jewry of 1275 which they felt endangered the continuing viability of their community. Ecclesiastical documents, such as the provisions of the Council of Oxford of 1222, are excluded. In this section as in the following section useful references are provided throughout to up-to-date literature. Different views taken in the secondary literature on the material seem, however, more often than not to be put side by side without an attempt to reconcile them or to argue which of the views might have the greatest merit.

The following section treats some 46 places and 32 Jewish persons, of whom four are women, in alphabetical order. Apart from these there are around 85 general entries ranging from 'Bet Din' to 'Herb gardens' and 'Population size' to 'women'. Somewhat surprisingly, the only medieval Christian personages to have made the list are Gilbert de Clare, Richard of Cornwall and Simon de Montfort. The other two names are of eighteenth-century savants, such as Thomas Madox who described the contents of the Jewish Exchequer and D'Blossiers Tovey, who authored the first study concerning medieval English Jews in 1738. Significant medieval ecclesiastics who played a key role in recording events concerning the Jews of medieval England, such as William of Newburgh, or who affected Jewish lives, such as Peter des Roches, are not listed in their own right. The reason for this may well be the unstated secular tenor of the book. But to my mind this is missed opportunity. Just as much as it is important that people realise that the history of medieval Norwich, for example, includes the history of the medieval Jewish community, Issac of Norwich, Jurnet of Norwich, Meir ben Elijah of Norwich (282-90), it is important for people to know that the William of Newburgh's History of the English contains the best source material for the anti-Jewish riots of 1189/90. The issue could easily have been addressed by providing an index of names to the volume. As it stands, anyone interested in Robert Grosseteste, for example, would need to work out which headings might include him. It obviously requires previous knowledge to look under 'Usury'. Once there, however, they will only find the report of Matthew Paris on the dying Grosseteste's favourable assessment of Jewish moneylenders in comparison to Christian ones (377). One needs to know to look under 'Leicester' to find a reference to the hostile sentiments which a very much alive Grosseteste expressed in his letter of the early 1230s to the Countess of Winchester (198). She had agreed to offer hospitality to the Jews, who had been expelled from Leicester by Simon de Montfort, in the part of Leicester which fell under her jurisdiction. The Leicester entry cross refers the reader to 'Usury' but the opposite is not the case.

All such quibbles aside, The Palgrave Dictionary of Medieval Anglo-Jewish History contains a wealth of interesting and easily accessible material as well as sporting an impressively up-to-date bibliography. The volume was published to mark the 120 th anniversary of The Jewish Historical Society of England, and it is a fitting tribute to the work of the JHSE, whose aim, as its website says, is 'to promotes the study of, and encourages research into, Anglo-Jewish history, and of communities connected with it' as well as 'to make the results of historical scholarship interesting to both a general and specialist audience'. Students of British and/or Jewish history will certainly find the volume incredibly useful as an introduction to a range of topics which includes so many up-to-date references. The general British public will find it a congenial reference work for uncovering details about the medieval Jewish past of a great many places of historical interest.