Karen B. Stern: Writing on the Wall 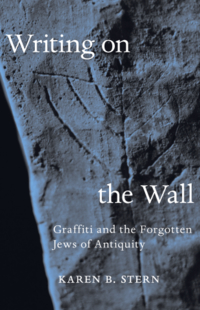 Karen Stern's new book is part of a commendable trend to mine neglected sources for Jewish history, attempting to gain new insights into old questions. Her focus is on a category of data that is pervasive, though not always accorded sufficient attention: graffiti - both textual and pictorial - produced by Jews or in association with them, from the sixth century BCE until the arrival of Islam. The topic is highly interesting, and several studies of graffiti in non-Jewish contexts appeared in recent years, by Rebecca Benefiel, Angelos Chaniotis, and Peter Keegan among others.

The book consists of an introduction and four chapters, divided thematically. Stern begins with the complex task of defining graffiti, a term in itself multi-faceted and perhaps even anachronistic as a concept (3). Distinctions such as those between official and unofficial inscriptions, or high and poor scribal quality, are often hard to discern in the study material. Hence, Stern provides a good working definition of her own, which she derives directly from the data: "graffiti are those markings (whether words, images, or both) applied in an 'unofficial' capacity and in social and dialogical ways" (20). These three characteristics are important and inform the analyses presented throughout the book.

The first chapter, "Carving Graffiti as Devotion", discusses data from religious locations ranging from the Dura-Europos synagogue, polytheistic desert sanctuaries, and the multi-faith Cave of Elijah on Mount Carmel. Stern raises good questions about ancient devotional activities (e.g., 38), suggesting that graffiti in these locations should be seen as a mode of prayer. Chapter 2, titled "Mortuary Graffiti in the Roman East", actually only discusses Palestine, focusing on the Beit Shearim necropolis. The author attempts to find patterns within these graffiti, and considers some of the motivations and beliefs of their producers. The third chapter moves to Miletos, Aphrodisias, and Tyre, and explores how some Jews could be "Making One's Mark in a Pagan and Christian World". Chapter 4, "Rethinking Modern Graffiti through Ancient", consists of seven pages and could better be titled "Summary", as it mainly reiterates the points discussed previously.

It is evident that a great amount of research has been invested in the book, yet the result is not always satisfactory. To begin with, the author's choice of methodology is unclear. It would seem that chapters are arranged by graffiti type, yet it soon becomes clear that the framework relies on conveniently available records. While this is not a problem in itself, it undermines Stern's attempts to find patterns in the data. For example, a comparison between Jewish mortuary graffiti from Palestine with contemporaneous ones from Italy, both Jewish and non-Jewish, would have been extremely interesting, yet it is lacking. Stern mentions the unavailability of data from Villa Torlonia (175), but there are other catacombs that could have been discussed. Similarly, a comparison between the graffiti from public spaces in Asia Minor, discussed in chapter 3, and data from Palestine would have raised interesting questions, but the author chose not to pursue it. A more systematic display of the evidence would have improved the book, by allowing the reader to observe existing patterns (or, conversely, would have emphasized the haphazard nature of graffiti).

Additionally, the targeted readership of the book is not entirely clear. On the one hand, the volume is too specialized for a general audience, yet it contains information that most relevant scholars will find superfluous, e.g. (86), ossuaries are "bone boxes", and arcosolia is the plural of arcosolium. Graffiti are usually transliterated, but at times merely translated into English (e.g., 73). This is not only inconsistent but also a strange choice in a book dealing with such short texts, in which every letter is significant.

The book's biggest shortcoming, however, is that the author tends to reach broad conclusions from a narrow factual base. This might be caused by the tantalizingly limited amount of information that graffiti actually yield, resulting in attempts to extract more than actually is there. For example, she assumes that carving graffiti would be painful: "powders and fragments would cover one's face and fill one's lungs with dust [...] and carving implements [...] surely drew blood when the lighting faded or surfaces grew unwieldy" (79). Regardless of the likelihood of this scenario in the context of such brief carvings, her suggestion that "Inscribers might have indeed viewed these types of laboriousness and ensuing degrees of pain as intrinsic components of their prayer experiences" seems exaggerated. Similarly, from the three-word Tyrian dipinto, "Matronas konchuleōs topos" (Place of Matrona the purple-seller) and its associated menorah, she concludes that "relations between some local Jewish, Samaritan, and Christian populations in the fifth and sixths centuries were sufficiently functional that the placement of a large Jewish symbol would not create a commercial liability for an associated vendor", and states that the dipinto "advances previous considerations of the roles of Jewish women in civic and commercial contexts in Tyre and elsewhere in the Roman East" (165-6).

Stern equally tends to enrich the meager graffiti data with information that it does not actually contain. For example, when discussing graffiti from the Paneion in El-Kanais, she claims that "Theodotos' graffito [...] also triumphantly details some of the perils the author faced en route [...]" (61). The text, in fact, does no such thing, merely stating that Theodotos "returned safely from overseas".

The insufficient substance is further reflected stylistically. The author tends to enumerate and repeat words and ideas, to the point that it becomes tedious. Sentences like "Jews, alongside Greeks, Egyptians, Romans, Syrians, Nabateans, and many others, rapidly found themselves dispersed throughout the expanse of a shifting Mediterranean, Arabian, and Mesopotamian world; their experiences are as much a part of that world as are the perspectives of the well-trained and better-known authors and editors from Carthage, Rome, Constantinople, and Babylon, whose literary treatises shape common understandings of these periods and places." (34) abound in the book. Repetitions are found even in the footnotes, which sometimes contain nearly identical text (204, notes 120 and 121). These profuse reiterations leave the impression that the book could have been much shorter, although its text only covers 175 pages.

Despite these flaws, this monograph contains several good points. Stern is clearly enthusiastic about her research topic, which quickly sweeps the reader along. Thus, she splendidly manages to demonstrate the beauty and importance of these seemingly simple writings on walls. Furthermore, her continuous attempts at reconstructing the sensory experiences, feelings, and actions of graffiti producers (e.g., by describing how light falls into the Beit Shearim catacombs at specific times of the day), could serve as an example to many ancient historians. It would be very valuable if Stern's extensive research (which, as mentioned on page xvi, is already arranged in databases) could be made available to the public, perhaps in a form similar to Rebecca Benefiel's digital project on Pompeii and Herculaneum (ancientgraffiti.org), but focusing on Jewish graffiti. Such an initiative would not merely allow additional scholars to engage with Stern's data, but also would ensure its preservation in a digital format - an extremely important consideration when it comes to easily-destructible graffiti.