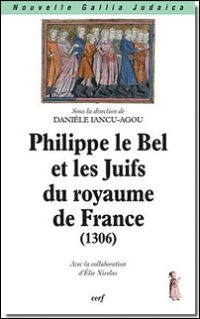 "They took me from my school, they took away my tunic, they dressed me in the rags of exile, they chased me from the heart of my studies" is how the renowned topographer of the land of Israel, Estori ha-Parhi (1280-1355[?]) recalled the abrupt interruption of his studies in 1306 when Philip the Fair ordered the expulsion of the Jews from most of what we now call France. [1] Estori reached the Holy Land via Barcelona. This volume publishes the papers which were given at a conference in Montpellier commemorating the seventh centenary of that expulsion.

Apart from a helpful and informative preface the collection is divided into two introductory chapters on the medieval Jewry of Montpellier and five parts. Part one contains papers concerning Jewish cultural and religious life in the Provence. The term 'Provence' seems to be used in the rabbinical sense of the term which included areas which were, in fact, in Languedoc. Simha Emanuel gives interesting examples of instances where rabbis such as R. Menachem b. Meiri at the end of the thirteenth century made every effort to maintain local customs which were at odds with Spanish mores. His examples include conventions regarding the length of time left between eating meat and drinking milk, timings for the saying of evening prayers on the long days in the depth of summer. This sense of self was expressed in a striking way with regard to dowries. Rabbis of this region seemed to be happy to acknowledge the affinity of their practice of adopting an additional contract to the usual ketubah (marriage contract) to local Christian practice by calling this contract the 'Christian ketubah'. The additional contract stipulated the return of a wife's dowry to her father if she died without issue in the first year of her marriage. R. Salomon ben Abraham Adret (died 1310) of Barcelona had no quarrel with the additional contract for which he found support in the Palestinian Talmud. But he was horrified at what he considered blatant imitation of non-Jews, something Jews were forbidden to do.

Part two looks at the Jews of Europe at the time of Philip the Fair. Europe in this context means the Latin Mediterranean. Germany is not covered.

Part three homes in on the expulsion itself. Céline Balasse tackles thorny questions concerning the extent of Philip the Fair's royal authority in 1306 which enabled him to precipitate an expulsion of Jews from the greater part of his kingdom. This was in marked contrast to his great-great grandfather Philip Augustus, who only had the power to expel the Jews from Ile de France in 1182 (and re-admit them in 1198). Through a detailed analysis of extant charter material recording the outcome of a number of disagreements between the king and the princes of his kingdom about the rights to confiscated Jewish property Balasse demonstrates how the Capetians had successfully manipulated the position of French Jews to increase their own royal jurisdiction beyond the borders of their own domain. Indeed, when a limited number of Jews were temporarily readmitted to France in 1315 they were all deemed to fall under royal authority.

The expelled Jews made their way to the south and southeast towards areas which were not affected by the expulsion such as Provence, Avignon, Comtat-Venaissin, Cerdagne and Roussillon, and to Spain but also eastwards to areas under German hegemony. Annegret Holtmann's contribution deals with the County of Burgundy, the area of her particular expertise.

Part four specifically concerns the French exiles. Through Julliette Sibon's account on Marseilles we gain a better understanding of the role Jewish communal affairs played in the kind of reception exiles could expect from their co-religionists. In Marseilles where well to do Jews were particularly well integrated in local civic structures there seems to have been precious little space for extraneous refugees.

The final part of the volume deals specifically with the recollection of the expulsion in the historiography. Simon Schwarzfuchs examines the dearth of specific evidence for expelled Jews of Zarfat (northern France as distinct from the southern regions). Schwarzfuchs wonders whether one of the reasons for this might be that the number of expelled Jews was considerably lower than many have assumed. Or to put it differently, he suggests that historians may have overestimated the size of the 'French' Jewish population at the eve of the 1306 expulsion. Conjectures have ranged from 45.000 to about 140.000/150.000. Schwarzfuchs suggests that the lack of references in the sources to mass conversion or mass migration or a massive impact of refugees from Zarfat could indicate that by 1306 there were only about 45,000 Jews in 'France', with one third of them living in Provence and Languedoc. To my mind, this would tally well with a Jewish population whose financial viability had been deliberately and consistently been targeted by the Capetians especially severely since Louis IX's detrimental edict of Melun in 1230.

Gérard Nahon has carefully examined the extant references to the events of 1306 in different types of Hebrew sources, ranging from letters and responsa to inserted comments in treatises, such as the passage with which I started by Estori ha-Parhi, which he included in his account of the topography of the land of Israel, Sefer Kaftor va-Ferah ('Book of the bud and flower'), hymns or fragments thereof and later chronicles. The Hebrew material provides us with information we would not otherwise have. We learn for example from rabbinic responsa that French Jews had their marriage contracts (ketubot) confiscated, presumably for the value of the parchment. The responsa advised husbands to get replacements so that they could continue legally to cohabit with their wives.

As in all collections of this kind, contributions vary in style, scope and quality. My only niggle is the inconsistent use of the term 'Provence'. Some authors seem to use it broadly to include areas in Languedoc, others do not. Very few define the manner in which they are using the term so as to avoid confusion. Also from my Anglo-Saxon perspective it seems odd that the volume does not contain more references to the seminal work that William Chester Jordan has done on the Capetians and the Jews. But as a whole, the collection works very well and will certainly be of considerable interest to specialists in the history of the Jews of medieval France and Spain. Nahon's annex of translations of the Hebrew sources for the expulsion is especially welcome.