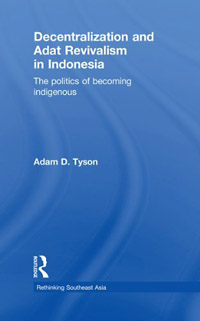 Decentralization and Adat Revivalism is based on field research that was conducted by the author in 2005 to 2006 during his PhD study. It focuses on indigeneity and adat revivalism in Indonesia, focusing on a few districts of the Sulawesi Island, including Gowa, Jeneponto, North Luwu, Luwu, Palopo city and Tana Toraja, in the South Sulawesi province, and the Majene district, in West Sulawesi.

Tyson's monograph aims to provide a different view on adat revivalism in Indonesia, or the implementation of the decentralization policy, after the fall of the Suharto regime in 1998. It reveals interesting dynamics and complexities between the mediators, government, corporate executives and other actors and people. Through its social and political analysis, this book systematically explores the complex interactions among these actors. In this transition of democracy called "Era Reformasi", decentralization inspires many actors to pursue the fight for their own interests. For local peoples decentralization becomes an opportunity to assert their aspirations and interests, based on their localities. It becomes, thus, a struggle to assert their local identity.

The contents of this book are arranged into three sections. The first presents the book's primary thesis and briefly reviews Indonesian history. Part two describes the efforts of the people of each region to be recognized as indigenous people and to play a role in the policy-making process. Government policy tends to view indigenous people as backward and unable to assert their rights to their ancestral land and its resources. Here Tyson contrasts the conflicting agendas of indigenous people with that of the government, the private sector, and NGOs.

The individual chapters explore the various ways local communities have participated in the political process to obtain acknowledgement as indigenous people. The first chapter is an overview of Indonesian culture, administration and power and politics. Chapter two provides relevant historical background, in order to situate the phenomena of decentralization and adat revivalism in a contemporary Indonesian context. The concept of adat figures prominently here as a tool of legitimization and revivalism. This section, moreover, highlights the most important values that triggered adat revivalism.

Chapter three describes the legal framework of decentralization. As the cases of Gowa, Majene and Palopo well illustrate, this book highlights the problems behind the making of the "Local Policy", or "peraturan daerah" (perda), regarding the recognition of ethnic minorities, namely the different views of the various stakeholders, including the local governments. The interaction between the central and local governments and the communities, unsurprisingly, triggered debate on how to obtain legal recognition and to formalize the legal status of indigenous people.

Chapter four is a case study taken from the Tana Toraja. Here, adat clearly still exists in many aspects of people's everyday lives. The debate over the nomenclature for the village level of government symbolizes the difficulty of achieving formal recognition of community status. It remains to be seen whether administrative promotion from "desa" to "lembang" will bring with it the values of the pre-colonial era. The North Luwu district, similar to the Tana Toraja region in its conflict with the state, is the focus of Chapter five. The symbolic, but comparatively ineffective, resistance of the indigenous people of Seko to state control offers a different perspective on the ultimate impact of centralization.

Chapter six provides analysis of the Lake Matano region of East Luwu. Here efforts at obtaining legal recognition directly opposed the claims of PT Vale Indonesia Inco, a mining company formerly known as PT Inco, to their ancestral lands. Corporate appropriation of this land, supported by the state, is cited by the author as a main factor behind the destruction of East Luwu's rural agrarian tradition. The dispute between local farming communities and PT London Sumatra (Lonsum) in Bulukumba is the focus of Chapter seven, where indigeneity is represented only as an object of bargaining over the interests of local elites.

Chapter eight provides the summary of this book, emphasizing the political implications of the adat revivalism and the intricate relationships between indigenous community, formal rules, and state authority, in the context of each region.

Tyson's work provides a clear overview about relationships between the local communities, local governments and other institutions such as NGOs and private companies in term of adat revivalism. This book is highly recommended for those who have interest in the issues of adat and local politics in Indonesia, especially in Sulawesi.