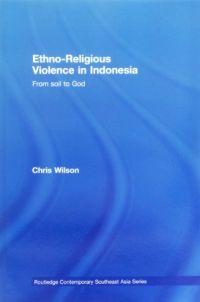 This book is the culmination of Chris Wilson's research of four years in Maluku, a part of eastern Indonesia. Wilson lived in North Maluku for one year to conduct observations and in-depth interviews with various actors connected to the conflicts that occurred during the period 1999 to 2000. In this work, the author makes use of modern conflict theories to describe the real conditions of tension and conflict, make sense of the level of mass sentiment and elite agency, and interpret the rational and emotional dimensions of the conflict in Maluku. As the book title reveals, the conflict in this region was triggered by multiple factors and quickly developed into massive conflict, which spread to many areas of northern Maluku.

This book opens with statistics illustrating the magnitude of conflict in 1999-2000: around 3,500 men, women and children were killed, several hundred thousands of people were displaced from their home, and many others are still missing. The conflict became one of the worst incidents in Indonesia since the beginning of the reform era, after the collapse of the Suharto reign in 1998.

Beyond the issue of scale is the complexity of the conflict. The author demonstrates that the religious issue did not unleash the conflict, as many people believe. Economic inequality, ethnicity differences, competing land claims and access to jobs pitted ethnic communities, religious and state institutions as well as community organizations against one another. In making his case, Wilson distinguishes among four levels of conflict: individual, sub-communal, communal and structural.

He also differentiates among several stages in the development of conflict, ranging from initiation and escalation to dissemination and political exploitation. Based on these categories, this book documents the escalation of conflict in each region of Maluku, such as Malifut, Ternate and Tidore, Tobelo and Galela and North Halmahera, areas which were originally peaceful, yet ethnically and religiously diverse.

Moreover, this book examines the Indonesian economic crisis and the transition from authoritarian to democratic rule, which cannot be cited as catalysts of the events of 1999-2000. According to the author, democratization in Indonesia was only a medium for the emergence of certain localities. For the local people, the current situation provided opportunities to claim territory and to affirm local identities. This created factionalism within the community, as each group tried to promote its own economic and political agendas. Thus, competing social, ethnic, religious and cultural identities caused tensions and triggered conflict.

Wilson traces the origins of the conflict to the Kaos and Makians, who vied for control over the natural resources associated with the Kaos' ancestral land. The situation was exacerbated by the creation of a new province in the Maluku province, North Maluku, which annexed Kao territory. The Kao considered the regional blossoming or "pemekaran wilayah", as an effort to give advantages to newcomers at the expense of natives. Territorial conflicts were made worse by religious tensions, which spread to other regions.

Wilson's work captures the multiple dimensions of the conflict in North Maluku, ranging from problems of land tenure issues to religious tensions between Muslims and Christians. In his analysis, Wilson considers the role of propaganda and rumor in enlarging the religious dimension: anti-Christian violence then spread from Ternate and Tidore to other regions of North Maluku. The elite, who escalated the conflict, misrepresented the tensions as purely religious.

Democratization in Indonesia not only promised to provide improvements for the people, but also paved the way for rival groups within the elite to utilize their resources against the conflicting claims of local ethnic and religious groups. The meddling hands of several outside groups further exacerbated tensions, as well as the lassez-faire attitudes of the provincial and central governments.