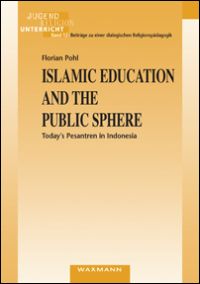 This book is a revised version of Pohl's doctoral dissertation which was inspired by his first visit to Indonesia during the Amrozi's trial (accused to have been involved in the Bali bombing in 2002). Lucky to have received help from local students in establishing contacts and obtaining access to the most 'scorching' place for a foreign researcher, Pohl was daring enough to take up the challenges of discovering his own opinion - does religious education breed extremism?

History shows that not a single conflict has occurred without the touch of religion. Therefore, Pohl develops his framework of religion and education in a public sphere by re-evaluating José Casanova's (1994) theory of secularization that describes "the process through which authority and control over almost all aspects of life and thought are separated from the control of the church and altogether freed from religious association." This re-evaluation is essential for this study as it provides new lenses for religion in society and its connection with the state. Pohl again mentions Casanova's contribution in the religion and state relationship, that it must be accepted as the best framework of secularization, yet, still accepting the fact that religion is an important component in life, as to balance with other potentials of modernity such as the "unchecked state power, moral relativism, and the de-culturing of effects of globalization."

Within the post-modernism structure that asserted Islam as an easy example of incongruity to the common modern pattern of secularization, it is impossible for Muslim society to stay independent between the state and the individual. This is supported by Robert Bellah (1970) in Islamic tradition, that it is the nature of Islam and that it will not "relegate religion" to any other parties which stand strong contrast to any development and growth of democratic structures. The author creates an interesting 'meeting point' for understanding the relationship between religion and civil society in contemporary Indonesia. The integration of the pesantren with state education and its revamp in curriculum has improved the standard of education among the pesantren. Some pesantren have even fully merged to other type of schools, which are also known as formal education institutions such as the madrasah or sekolah.

The author moves deeper into the subject matter by contributing deep insights on the pesantren and its relationship to the democratic civil society development in Indonesia. By describing the historical educational development and the rejection of colonial education policy, dualism in the education system exists; one that is supported by the government and the other a non-government 'illegal' education institution. Does intricacy exist? When the pesantren education system is combined with European and local values (which relate to Islam and Javanese values), but then denied to colonial government policy. The author justifies how colonialism was 'roughly' inaugurated among the society in order to minimize the education preferences which had created an uneven status of academic level among the institutions. This had triggered nationalism in some circles of the society in the early 20th century with the emergence of the Islamic Trading Association (Sarekat Dagang Islam) and Javanese Cultural Association by Boedi Oetomo. Although it is considered as an opportunity for individuals to improve their standard way of life and guarantee to obtain position in government offices, many institutions still deny the government policy. During the early days of independence, the Dutch education models were decreased and Bahasa Indonesian was used as the main instruction language. At the same time, the Muslim community also received benefits with the establishment of the Religious Affairs Office which eventually turned into the Religion Department in 1946. The pesantren officially became an alternative education institution in Indonesia, and since then, ideas between Western education and the local existing values have been interlaced. However, there is still a tendency of political elites who prefer the Western education system as a reference to build an educational system. During President Soekarno's administrative, therefore, the education system has been likely secular. The pesantren remains an influence on the social context, but limited to the curriculum and school routines. In 1970 many Islamic education institutions such as the madrasas and the pesantren began to accommodate the curriculum of the Religion Department and were later accepted as religious education institutions. The pesantren is not only involved in the context of theoretical and intellectual dimensions in building a pluralist society in the Muslim-majority country. It is also preparing students to be able to live as a Muslim in a heterogenetic community. The pesantren Al-Muayyad Windan in Solo, Central Java is one of these.

Pondok (smaller type of school) pesantren Al-Muayyad Windan is one of the five branches of Pondok Pesantren Al-Muayad Mangkuyudan, Surakarta, Central Java. It was established in 1996 as a boarding school for the students, both women and men, in community empowerment. As typical of many pesantren in Indonesia, this school is under the management of families. Genealogical kinship is very helpful to build a sense of historical and ideological continuity between the school's office and the management office. Al-Muayyad was founded by Kiai Abdul Mannan in 1930 as a mystic boarding-oriented (Sufism) madrasa. After 7 years, Kiai Abdul Mannan was succeeded by his son Kiai Ahmad Umar Abdul Mannan who started modern education. The leadership of Umar scholars has brought excellent reputation of Al-Muayyad for Qur'an studies. As leadership changed, the style of curriculum also changed accordingly to the national curriculum. The Al-Muayyad defines themselves as a 'community development agency' by educating and empowering the society and operating fully financially independent from the state. As part of Al-Muayyad, the pesantren Windan systematically conducts community development activities. They also seek to influence other pesantren activities nearby to curb any undemocratic activities- as Solo or Surakarta is known to be an existing area for extremist movement. In Windan, each student is given the freedom to choose their level of study after they pass the qualification test. It is normal for this type of institution to select and train the best student to be the teacher for the next generation. Educational process in Windan is normally regulated by a coordinator who is chosen as a representative of the students (with supervision from the main management in Mangkuduyan). The education process is implemented with emphasis on spiritualization of education. Windan is expected to transfer the students understanding of religion into everyday life. Therefore, the process is not only about religious subjects internally, but also encourages the students to participate in various seminars, courses and training during their time at school. Moreover, Windan also establishes a good relationship in the process of empowerment with various NGO's around it. Two NGOs that have good relations with Windan are The Institute of Human Services of Interfaith Community (Lembaga Bakti Kemanusiaan Umat Beragama) in Boyolali and The Center for Regional Studies and Information (Pusat Telaah dan Informasi Regional), Pattiro. This relationship helps Windan to empower many communities through various activities spanning over religion, cultural and ethnicity issues. In addition, Windan also encourages effort for women's empowerment by building contacts with organizations like Rahima (Center for Training and Information on Islam and women rights issues) and Fahima. The author asserts that Windan as an academic institution which has a good concept to support democratic thinking in plural society. Together with the incorporation of the modern schools image and maintaining the pesantren characteristics as religious schools, Windan has showed respect to issues of race, religion, ethnicity, gender and class.

Windan pro-pluralism methods include: i) preparing the students as the agent of change ii) active involvement with community activities, and iii) good relationships with the NGOs, which have successfully provided opportunities for the growth of religious tolerance in the heterogeneous community. Despite the fact that the Kiai is still dominant in this pesantren, it is still evolving as a harmonious religious institution and verifies how Islamic educational institutions do not always produce militancy, intolerant and anti-democracy extremists.

This book is an inspiring and exciting read aimed at not only those who follow religious dialogues, but also to those who are interested in contemporary religious tolerance studies, particularly in the pesantren and its challenges among civil society. The author succeeds to justify the assertion that the pesantren is not an institution that is always anti-pluralist, non-democratic and marginalizing women's rights values, but it is also an institution that supports democracy and tolerance in a plural society through its curricular methods and active participation in the public sphere.

Nor Azura A Rahman / Sukri Tamma