Doris Behrens-Abouseif (ed.): The Arts of the Mamluks in Egypt and Syria - Evolution and Impact, Göttingen: V&R unipress 2012

Fawzi Habashi: Prisoner of All Generations. My Life in the Homeland. Translated by Jano Charbel, Berlin: Klaus Schwarz-Verlag 2011 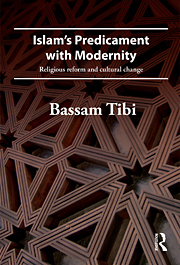 Bassam Tibi belongs to the restless spirits of Middle Eastern affairs. This Syrian born scholar led the community often in international relations, Islam, Arabs, Nationalism, underdevelopment, and Islamic culture. The reader can hope for similar good ideas in his book on Islam's predicament with modernity. However, this recent book is different. Not because Tibi claims that this text is the summation of his life's work, or that he wrote it as a Muslim primarily for Muslims who are willing to engage in reform and change. But for the emotional colored mixture of his life and research in four regions. First, we look how he portraits himself. Secondly, we focus on two main points: Orientalism and Islamology.

In the introduction Tibi disputes the rhetoric of the "clash of civilizations" and "war on terror." He explains his belief that conflicts can peacefully be resolved in a process of negotiations. Also he points at the sources of tensions: If only the politicians of the West were willing to learn properly from a cultural analysis of political conflict, de-escalation could be achieved. He makes this point. To be fair, the reader might question the missing qualities of other politicians too. Tibi views violence with disdain and wants to counter it.

He says, he is a former Marxist educated in the Frankfurt School. In his book "The Crisis of Modern Islam" he paid his farewell to Marxism in 1980. He positions himself in the so-called moderate Islam. Still he claims that scholarly knowledge has no religion. Are faith based thoughts not the first developers of know-how even after the enlightenment?

From 1969 to 2007 he wrote 27 books in German and eight in English. Now he concludes that his German life is more than depressing (XIV): after living there for 46 years he gave up the German case as lost. The German Kulturnation knows nothing about current Islam. In claiming modesty, he underscores now, the Germans replaced their arrogance with a mentality of self-defeatism. Liberal Muslims are sidelined in favor of Islamists. That is why he wrote this book in English because to do it in German is a form of concealment. Moreover, he underlines that he was not only a loner but silenced in German academia.

He gives two reasons for what went wrong. A German news magazine published an issue on Islam in Europe in 2008 and did not mention one of his works. Thus he felt reminded of the legacy of the annihilation of the Jews in Germany in regard to his edited work in German. This, he claims now, is the devastating record of his life in Germany. "I contest the way in which we are treated by Europeans in the Old World." (XV) Secondly, he names "injustice and discrimination" at Göttingen University that abolished his chair in Global Studies and Islamology with his retirement in 2009. Since his study center was closed, it is indeed sad. But it happens. What shall all the East German scholars say who were marginalized in the unification or there institutions overtaken? For two decades now are some of them more or less unemployed. [1] But nobody can be really silenced anymore.

Now to the contents; Tibi outlines five core issues like the failure of modernization. Next comes the return of the sacred and the choice between the shari'atization and religious reforms. He deals also with culture, conflict and globalization. He raises the question of Orientalism and who studies change? The latter point concerns Muslims or Westerners. Finally he sheds light on religious-cultural pluralism, trialogue and cultural modernity.

If you seek answers to challenging questions, you will find many here. But Tibi doesn't make it easy. Often he touches topics to rush on. He tends to be broad on generalizations, see Orientalism. Profane Westerners, he claims, fail to understand culture and religion in politics. This, he stresses, is the real Orientalism often presented as Orientalism in reverse (XI). On the one hand he rejects the Orientalism, on the other hand he still propagates it.

He points out that traditional Orientalism is not only a mindset that reflects a combination of prejudice and supremacy but also one that expresses the hegemony of philology in Islamic studies in Europe. In this book he dismisses not only Western Orientalism, in line with the original intention of Edward Said, but also the opposing Islamist and Saidist mindset of Orientalism in reverse (10). Then he goes down the Saidian path claiming that Western scholarship is overly Euro-arrogant: therefore he agrees with Edward Said in his criticism of the tradition of Eurocentrism toward Islamic civilization as Orientalism (91).

Edward Said was often plausible de-constructed. Lately by Robert Irwin, Ibn Warraq and Michael Curtis, just to name a few. [2] So this whole discussion is shrinking to a footnote of history. This is true for "West" or "bi-polar order." There is no unified West. In the Cold War there was no bipolar but tripolar order: two military blocs and a non-alligned group.

This leads to my last point. Tibi suggests a reborn Islamology: the study of conflict in the religionized politics of civilizations (8-9). But what are the very special methods of such a field? A hundred years ago, one of the founders of modern Islam studies honored his co-founder of this discipline. Carl Heinrich Becker called C. Snouck Hurgronje a master of Islamology. Both developed new methodes, contents and prospects. Islamology was regarded as the joint discipline and the French word for the German Islamwissenschaft.

Both acted at the start of religionization of the Middle Eastern policy and Islam policy in the German Reich since 1898. This tells a lot about the German-Ottoman jihadization of Islam. He who is familiar with it would reject some of Tibi's notions like: the European nation state came up after Mustafa Kemal abolished the caliphate (157). In the region was no U.S. engagement prior to 1956 (163). There is no line between Hasan al-Banna and Tariq Ramadan (165). The Muslims are in Europe now an ethnic underclass (174). Islam and politics were not discussed clearly before 1925 (186). The Qur'an contains no system of government. Becker is an example of racist Orientalism (253). Egyptian Islamism was based on Muslim Brothers since 1928 (274). Yet he develops a productive idea about the Islamic supremacist worldview encountering the stranger (220), that is siyadat al-islam.

If he cites the Syrian politician Shakib Arslan of Geneva, we should add that he was since 1917 close to Max von Oppenheim's circle in Berlin to incite the joint German-Ottoman jihad in the colonial back of the British, Russian and French rivals. Therefore, this amir worked as agitator of German political Islam and wound up on the Nazi's payroll (1.000 mark monthly). So he does not offer exactly a case for original ideas. All in all, Bassam Tibi wrote a provocing book with some sad splashes of self-reflection on his creative life.