Sean L. Field: The Beguine, the Angel, and the Inquisitor 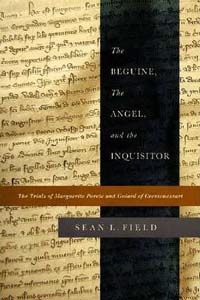 Guiard of Cressonessart was tried with Marguerite Porete in Paris in 1310, after his vocal defence of her brought him to the attention of her inquisitor, William of Paris. They were tried at the same time, in the midst of Philip IV's campaign against the Templars. Guiard eventually recanted and was sentenced to life imprisonment, while Marguerite remained silent and was sent to the stake less than a month after the first Templars had been executed.

The trial and execution of Marguerite, and the condemnation of her book, had wide reverberations in the century that followed, but the record of these events is contained in a few spare records of the trial, and a handful of chronicle references. It is with these records that Sean L. Field is ultimately concerned in this book, which seeks to flesh out the characters of Marguerite and Guiard and their accusers, and to explore their actions and their choices through a careful reconstruction and contextualization of the events leading up to and during the trial.

The various and overlapping contexts for these events, which inform the discussion throughout the book, are outlined in the introduction. For Marguerite and Guiard, the immediate intellectual milieus are, respectively, the written tradition of beguine mystics, and the contemporary enthusiasm for Joachimite eschatology. Though Field is always careful to show where they are aligned with these strands of thought and where they diverge from them, his point at this stage is to show that they are not inventing material de novo, but working with wider currents of piety and thought. The expansion of royal power within the kingdom of France under Philip IV - and the corresponding power struggle with the papacy - and the persecutions carried out by the crown against the Templars and the Jewish communities of France are laid out next, followed by a brief sketch of the development and character of inquisition.

Within these contexts, the rest of the book then does two main things: it reconstructs a biography for each of the main characters (Marguerite, Guiard, and the inquisitor William of Paris, chapters 1-3), and then it reconstructs the biography of the trial - the events and interactions that led up to that point, and the nature and chronologies of the trials themselves (chapters 4-7). The texts of the trials are given in translation (from the manuscripts) as an appendix, which supports the close reading of them undertaken by the book, and which is also extremely valuable as a resource in itself, in particular to have them presented in chronological order in this way, along with the relevant chronicle entries, and a letter from Arnau of Vilanova to Guiard's followers.

What the book presents, then, is a close reading of the trial documents that sheds light simultaneously on the trial and on early fourteenth century Paris. The overall intent is to reconnect the motivations of the individuals involved - accused and accusers alike - with their circumstances and environment; to show how their choices were informed, and how the results of those choices were contingent upon the situations in which they were made.

Questions of detail and interpretation are examined in the course of this exercise, as and when they pertain to the narrative. So, the problem of dating of the documents, which has been muddled in places, despite the careful precision of Lerner's work (noted here, as throughout the book), is given a thorough examination, as is the question of Marguerite's status as a beguine.

Most of the individuals appearing here are sketched in some detail, so far as is possible, including the early opponents and supporters of Marguerite, and some of the expert theologians advising William (including Nicholas of Lyra). These biographies are carefully done, and give the narrative of the book much of its colour and power. Field is always concerned to show the motivations of the people involved, the context in which they would have understood and processed the circumstances in which they found themselves, and the detailed and overlapping lives that he describes allow him to build a picture of the trial in which the complexity of the actions and reactions can be seen.

Larger themes are explored in the background to this examination, in particular the trial and condemnation of the Templars, which forms a backdrop to this story, and those interested in the Templar trial might find the parallel process of Marguerite and Guiard enlightening, given the detail with which the actors and events are contextualized, and indeed the overlap between them. It is often, in fact, in the connections made between the trial and the inquisitors and the contemporary political culture of Paris that this book is at its best. It is also useful to have a discussion of inquisition in the north.

The book has three epilogues in place of a conclusion, though a concluding synthesis of the larger points being made would have been welcome here, particularly about the intersection of royal and papal power, and the ways in which inquisition was used or exploited in that context, which are so carefully laid out throughout the book. The three epilogues deal with, in turn: the production of the documents, and William's death; Arnau of Vilanova's letter to Guiard's followers; the influence of the trial on the council of Vienne. The first of these feels as though its content could have been easily dealt with in the main body of the book, and while the last is important, it might have formed a useful part of a conclusion. The second, however, is intriguing, and shows the much wider impact of Guiard's followers and ideas - it feels as though this deserves more fanfare than it receives.

Very little has been written on Guiard, except for the work of Lerner, and most discussions of Marguerite have tended to focus on her mysticism and her writings, so to have both figures examined in detail in their legal and intellectual contexts is valuable.[1] In some ways this sets the book alongside recent studies of the social dimensions of lay spiritual movements (such as Simons' study of the Beguines of the Low Countries, City of Ladies).[2] It has more in common, however, with those focused examinations of judicial repression of dissent, which, following the approach championed by Biget, seek to explain the events within their political and cultural setting (such as the work of Julien Théry, Guy Lobrichon, Louisa Burnham).

A close analysis of the trials of Marguerite and Guiard, which teases out the details of the lives of those involved, this book has much to recommend it not only to students of Marguerite and late medieval religion, but also to those interested in the machinations of the French court and the development of inquisitorial technique in the north.