Sean L. Field: The Beguine, the Angel, and the Inquisitor. The Trials of Marguerite Porete and Guiard of Cressonessart, Notre Dame, IN: University of Notre Dame Press 2012 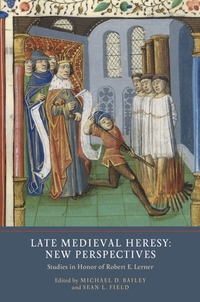 This edited volume honours the career of Robert E. Lerner, a pioneering and leading scholar of the late medieval religious thought. Rather than a conventional, sprawling Festschrift, which Lerner himself disapproves of, the book is a more focused collection on Lerner's primary field of studies, late medieval heresy. The contributors are Lerner's former doctoral students and "international students-by-proxy", with the preface and afterword written by two Lerner's long-time colleagues, Richard Kieckhefer and Barbara Newman respectively.

The contributors treat diverse aspects of heresy and dissidence in the period of ca. 1300-1500. All chapters link somehow to Lerner's research, and this gives the volume unity and cohesion, even when at the surface level some of the chapters are very unlike each other. In my review, I concentrate on the central themes in the book.

First of all, Lerner and the contributors share a similar approach to sources about heresy, being acutely aware of the oppressors' role in the sources' formation but avoiding extreme deconstruction. Sylvain Piron captures this (Grundmannian) view on the nature of heresy: "heresy is neither just the projection of inquisitorial fantasies, nor the expression of a revolutionary will to break with ecclesiastical authority, but rather the result of a complex interaction between opposing forces whose conflicting views over what constitutes a legitimate Christian community gradually harden to the point of becoming entirely irreconcilable" (35).

As the editors point out in the introduction, in his research, Lerner has combined Herbert Grundmann's methodological approaches with "the sharp attention to political and social realities" (6). Several chapters treat the political implications of heresy while acknowledging that heresy was not a mere excuse masking other motives even in political trials. Sean L. Field proposes that the Templar trial was also a failed attempt to establish a French "national" inquisition. Georg Modestin puts Pope John XXII's undeniably political struggle against Louis of Bavaria in the context of John's other campaigns against the disobedience to the Church. Elizabeth Casteen analyses the heresy accusation against Louis of Durazzo and concludes that Louis was a genuine protector and sympathiser of dissident Franciscans in addition to being a rebel.

Casteen's essay coincides with another recent publication on the Spiritual Franciscans, Alexander Patschovsky's edition of the process against two Spirituals in Avignon in 1354. As the publications came out simultaneously, Casteen could not have considered Patschovsky's edition or vice versa. However, the reader should be aware that one of the men accused in Avignon, Francesco d'Arquata, indeed confessed familiarity with Louis of Durazzo, thus supporting Casteen's argument. [1]

One recognisable strand is the chapters discussing common schools of thought that were increasingly under suspicion in the late Middle Ages: mysticism, magic and alchemy. Michael D. Bailey compares the careers and works of the well-known (heretical) mystic Marguerite Porete and a contemporary Benedictine monk John of Morigny who tinkered with necromancy. Justine L. Trombley studies the later reception of Porete's famous Mirror of Simple Souls and provides the reader with a rare treat: two previously unknown manuscripts of the Latin Mirror. Louisa A. Burnham presents a fascinating individual Limoux Negre, burned as a heretic in 1329. Limoux possibly had had some influence from Southern French Cathars, but mostly cooked up his original worldview based on alchemical theories. In the late Middle Ages, such individual thinkers popped up here and there, and Limoux reminds me somehow of his Swedish contemporary, Botulf. [2]

What then are the new perspectives promised by the title? If the reader anticipates fashionable theoretical turns or big data, they might find the volume wanting. However, for anyone interested in late medieval heresy there should be no cause for disappointment. There is a great deal new and thought-provoking in the volume, and contributors repeatedly display tour de forces of medieval historians' expertise: mastery of archival and palaeographical skills, deep understanding of how the sources came into being and have survived to us, and sensitivity to local and particular events combined with the knowledge of the broader cultural, social and political climate of the period. The new perspectives are brought up by this skillset, combined with the readiness to challenge one's own previous results, as Frances Kneupper does in his chapter on Johannes of Dorsten's questio quodlibetalis disputing prophetic thought. Kneupper corrects his own earlier interpretation that Dorsten's question is not related to the contemporary prophecies of the Wirsberger brothers (188) and provides an excellent example of heretics and their persecutors arguing in completely different registers.

A particular kind of "new" in this volume must be emphasised. Several contributors make tributes to Lerner's fascination with archival discoveries. In addition to Trombley, Sylvain Piron describes previously unknown manuscripts, his case being the neglected Postilla super Danielem by Barthélemy Sicard, perhaps the most important student of Peter John Olivi. Many others make ample use of unpublished sources. Deeana C. Klepper studies how the Augustine canon Albert of Diessen modified the Dominican tradition of pastoral manuals to fit Bavarian parish level requirements in the 1360s and 1370s. Her thorough analysis is based not on one but three different manuscript versions of Albert's work, surviving as autographs. These contributions make an important point: even today there is a frontier of un- or understudied late medieval works and documents on heresy.

The only significant flaw in this excellent volume is the near absence of the truly popular late medieval heresies: the Lollards in England, the Hussites in Bohemia, and the Waldensians surviving in the German lands and Piedmont. Only passing references are made to these heresies. Of course, each of them is a large field of study, so their exclusion from this volume is probably the right solution. Nevertheless, this choice should have been better justified in the introduction, if only to remind the reader about what else looms in the dissident landscape of late medieval Europe.

All in all, this edited volume consists of high-quality case-studies that challenged at least me to rethink my research and spawned a heap of notes and new questions. Both the contributors and editors have done their best and offer a volume that should be compulsory reading to all students of late medieval heresy.