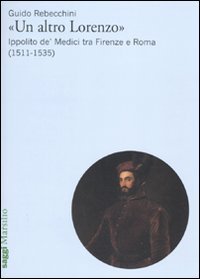 Hard though it is to believe that among the much studied Medici there are still some "minor" figures that have been largely overlooked, for example, Ippolito de' Medici: despite Titian's handsome portrait "in Hungarian dress" (Palazzo Pitti, Florence) and a string of more or less romantic stories about this young man, he seems to have elicited little interest among scholars. Perhaps the most exhaustive study about him to date is the one by the early twentieth-century medical doctor and historian Gaetano Pieraccini, even though he seems to have looked upon the earthly remains of the Medici scions mostly with fascinated distaste. Ippolito did not feature at all among the cardinals whose earthly possessions were discussed in a conference (London 2004) and in the subsequent publication. [1] His entry in Wikipedia is a stub in need of expansion.

Guido Rebecchini has studied a wide range of published and archival sources in order to bring this young man back to life. And what a life it was, for all that it was too short and probably not what Ippolito would have chosen had he been at liberty to do so.

Born in Urbino on 19 April 1511 as the natural son of a Medici, Giuliano di Lorenzo de' Medici, his recognition by the family was by no means assured from the start. Given the name of Pasqualino, his existence was at first hidden from his biological father who nonetheless, once he had learned of this child, acknowledged the paternity and took care of the boy as well he could before his death in March 1516. The early loss of his father was soon followed by the demise of Lorenzo duke of Urbino in March 1519 and that of Pope Leo X in December 1521. This series of deaths not only meant that Ippolito had lost a string of family members interested in his well-fare and future by the time he had barely reached his teens but that he ended up in the care of Cardinal Giulio, future Pope Clement VII, who was by then responsible for young Alessandro who may or may not have been his own natural off-spring.

Ippolito's, Alessandro's and Caterina's (possibly the half-sister of Alessandro) respective fate became soon intertwined. Any of them might have ended up eventually with the big prize of ruling over Florence, even though at first it did not look that likely that the Medici would remain in charge in the long term, given the political situation in Europe before and after the sack of Rome. At first Ippolito seems to have been the one chosen by Clement for such a possibility, perhaps because he was slightly older than the other two, but at some point the pope seems to have made the fateful decision to give Ippolito a cardinal's hat in 1529 while negotiating Alessandro's marriage to the emperor's natural daughter, Margherita, after Charles V's coronation in Bologna in 1530. Alessandro was created Duke of Penne and later Duke of Florence and in 1536 received his bride in Florence. In January 1537 he died, murdered in an ambush arranged by his cousin Lorenzaccio, to be replaced by Duke (later Grand Duke) Cosimo I.

To begin with the cardinalship seems to have suited Ippolito well, since it gave him standing in Rome and all over Europe; nonetheless it seems as if the ecclesiastical career soon became irksome, while being overtaken by the younger cousin, cannot have been anything but a grave disappointment.

However inauspicious Ippolito's entry to this world and however many obstacles to his ambitions he encountered during his life (see the first part of Rebecchini's book, chapters I to V), he developed into a fine young man with a considerable temper and a string of talents - of the body as well as of the mind - that were then seen as essential for a young prince. Handsome and athletic, he was a keen huntsman and a composer of laconic aphorisms. This predilection for arms and letters may have been not more than a commonplace expectation from a renaissance prince but Ippolito seems to have been comfortable in both fields. He certainly understood the importance of presenting himself as a man of taste and collector of works of art, both ancient and modern, who continued traditions of artistic patronage (part two, chapters VIII to IX) that had made his family well-known and much admired throughout Europe since the fifteenth century. Likewise he seems to have been in his element when he was sent by Clement VII as papal legate to Hungary (1532) in order to enrol troops against the threat posed by the Turkish army (90-101). Not happy to sit safely in Regensburg waiting for news about events and relying on others for information about the sites of future military engagements, Ippolito set out with a small group of soldiers to investigate in person, sometimes pursued by the Turkish vanguard, warning the resident population of attacks, witnessing the cruel treatment of Christian prisoners by the Turks and interrogating a Turkish prisoner whom he invited to his lodgings. This was also the time when Ippolito had his portrait painted twice by Titian, once in "abito all'ungaresca" and once in armour. The latter, in particular, was part of a new fashion of princely portraits wearing plate armour which Ippolito apparently had helped to create when Titian was called to paint Charles V in Bologna in such military attire (c.1530).

That Renaissance portraits were intended to be much more than simple likenesses, is a recurrent theme of current research; accordingly Rebecchini takes a detailed look at the changing presentation of the young cardinal who preferred the image of a prince of the blood to the one of a prince of the church. Being forced to live not so much in the wrong body than in the wrong clothes, and therefore in the wrong character, Ippolito continuously felt the need to break with the constraints of ecclesiastical decorum and to assume a variety of costumes and, thereby, roles much more in tune with his own aspirations (157-169). These "masks" did of course not pass unnoticed, indeed they were intended to send out political messages during meetings (for example between Ippolito and Alessandro, 163), and there is testimony of Pope Clement's harsh reaction to the cardinal's permanent infringement of established dress codes (165).

Clement died in 1534. Even though the Medici were back in power over Florence, young Duke Alessandro was not the ideal or an uncontested incumbent. The political scene in Rome was going to be mixed anew as a result of the conclave. Indeed, Alessandro Farnese who emerged victorious as Paul III was soon going to position himself and his family as fierce competitors to Medici ambitions, preying successfully on Medici positions, alliances and possessions. Ippolito's death by poison in 1535 happened exactly in the ensuing turmoil of shifting politics and seems to have made quite a few people in Florence and Rome, including the pope, rather happy, since it eliminated a dangerous source of competition from their midst. The myth created after his death has helped to obscure his life and personality. Rebecchini's painstaking work in reconstructing and documenting Ippolito's career and character has done much to clear away the cobwebs and to show us a plausible Medici scion in search of a fitting role.