Kendra Eshleman: The Social World of Intellectuals in the Roman Empire. Sophists, Philosophers, and Christians 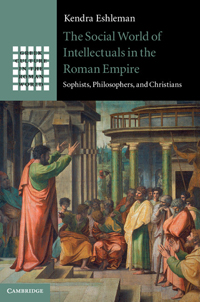 This book is a revised version of a thesis written at the University of Michigan. The subject is not the entire "social world" of the groups implied by the title, but rather the construction of identity as it is expressed in their creation of hierarchies, chains of succession, and in-groups versus out-groups. Eshleman is less interested in all three groups equally than in contrasting and comparing these processes among Greek "intellectuals" or pepaideumenoi, especially Philostratus, with the equivalent processes among Christians, especially in their definitions of heresy.

Students of early Christianity have long been interested in the non-Christian culture that flourished at the same time, the most conspicuous example being perhaps Franz Joseph Dölger. Students of "pagan" culture have been slow to return the compliment. It was a defect in a volume also concerned with identity-formation, Being Greek under Rome: Cultural Identity, the Second Sophistic and the Development of Empire, edited by Simon Goldhill (2001), that it had very little reference to Christianity as against two entire chapters on Judaism.

The present volume is therefore highly welcome. Eshleman makes a convincing case for the similarity of the stratagems by which Christians and non-Christians establish their own practices as canonical and authoritative. A very interesting example is her comparison of Clement of Alexandria and Diogenes Laertius in chapter 6. Indeed this chapter, "Succession and self-definition", which brings in Quintilian and Pomponius Labeo, is perhaps the most successful in the book, and among other things illustrates Eshleman's readiness to step across the boundaries that confine many studies of "intellectuals" in the imperial period.

Eshleman does not overstate her case, and rarely claims any direct influence of contemporary Greek practice on Christian. Early in the book, she describes her purpose in these terms: "Setting early Christian controversialists alongside Second Sophistic intellectuals helps to highlight [my italics] the less often noticed dynamics of inclusion and exclusion among the latter" (4). Hence her frequent use of words or phrases such as "recall", "echo", "much as": thus, "Much as Diogenes Laertius employs the philosophical diadochai [...], Justin cites the Christian absorption [...]" (237, cf. 243).

Sometimes, however, Eshleman implies a more direct connection between pagan and Christian "discourse". "Early Christian succession lists should be understood as participating in the broader cultural and political discourse of the early Empire" (215); "these networks [...] represent a legacy of the Second Sophistic authorizing discourse in which the early Christian formation of 'orthodoxy' was deeply implicated" (262). The term "discourse", fashionable now for over a quarter of a century, has its uses, but is dangerously vague. If Eshleman is merely saying that both Christian and pagan "intellectuals" used similar devices to justify their own authority, that seems harmless enough. No-one would contest that there is a similarity between Philostratus' returning to the fifth and fourth centuries to find the origins of his Second Sophistic, and Christian authors tracing their own doctrines back to Moses or the prophets. But most Christian authors of this period betray little sympathy for contemporary pagan "discourse". Thus Tatian: "You established rhetoric on a basis of injustice and chicanery, selling your freedom of speech for pay [...] What that is distinguished have you produced by your philosophizing?" (Apology 1,3, 2,1, translated by Molly Whittaker).

Tatian is admittedly a declared foe of Hellenic culture, but his position is to be expected among Christian "intellectuals," considering the low esteem in which Christianity is held by their counterparts such as Lucian, Celsus or Fronto. By contrast, there is a study waiting to be written on Judaism among these same authors. Among items that might be included is the celebrated reference to the opening of Genesis by the writer On the Sublime (9,9); the funerary inscription set up by Amphicles, one of Herodes Atticus' pupils, over his prematurely dead son, with its clear borrowing from Deuteronomy (Louis Robert, Opera Minora Selecta 5, 1989, 701-708); and Heliodorus' borrowing from Philo in his Aethiopica (9,9,3; Philo, Life of Moses 2,195, [6, 544 Colson, LCL]).

From the emphasis which she places throughout on the Second Sophistic, it is clear that Philostratus and his creation provide Eshleman's favorite model for her notion of authorization and group-construction in contemporary Hellenism. Here again she is careful not to overplay her argument. Indeed, in a splendid section, "Other Sophists, Other Circles" (139-146), she shows how idiosyncratic Philostratus' choices are, and how differently others might have drawn the lines of influence and affinity in the Second Sophistic. (Another recent contribution to this discussion, which no doubt appeared too late for Eshleman to notice, is by Adam Kemezis, "Narratives of Cultural Geography in Philostratus's Lives of the Sophists," in Thomas Schmidt and Pascale Fleury, eds., Perceptions of the Second Sophistic and its Times, Toronto 2011, 3-22; other essays in this volume also take up some of the themes that she discusses.) A new "forgotten sophist" has turned up: L. Flavius Stlaccius from Sardis, acclaimed as "excellent sophist" (sophistês aristos) at Alexandria Troas (M. Haake in E. Schwertheim, ed., Studien zum antiken Kleinasien 7, Asia Minor Studien 66, 2011, 147-158; Bulletin épigraphique 2012, 354 [REG 125, 2012, 642]). Sardis, the third city in importance of the province of Asia, earns only a passing mention in the Lives (1,22,4, 37 Kayser).

On the other side, perhaps the most sophistic, certainly the most sophisticated, of early Christian apologists, gets no mention at all in this book: Athenagoras, Athenian-born and steeped in classical literature. His Embassy is actually a defense of Christianity cast in the form of a petition to Marcus Aurelius and Commodus, and using many of the tropes of extant petitions surviving on stone and papyrus. (There is an excellent edition by Bernard Pouderon in the Sources chrétiennes, 379 [1986]). Athenagoras manages to defend Christianity without ever invoking the name of Christ. Here is an author who criticizes many aspects of Greek culture while striving to sound conciliatory and philosophic.

A deeper question, which Eshleman does not quite confront, concerns the fundamental difference between the Christian community, the ecclesia, which whatever its variety of belief and practice at least aspired towards unity, and the altogether different groupings of sophists, philosophers, doctors that existed in the wider world. Tatian again: "Why, men of Greece, do you want to cause society to come to blows with us? [...] [Some of] your philosophers [...] receive 600 gold coins a year from the Roman emperor for no useful purpose except that they may even be paid for letting their beards grow long" (Apology, 4.1, 19.1, translated by Molly Whittaker). The Christian "assembly," despite borrowing its name from assemblies of the Greek city, was separated in space, riven by dissension, and surrounded by neighbors who might at any time incite the authorities to active persecution. Moreover, the issues involved in its disputes, however remote they may appear to modern observers, for them were literally a matter of life and death, though the life was the eternal life of the next world, not the present life, which they were often willing to sacrifice. Believing that the Creator God was different from the God of Israel, or that Christ had not suffered in the flesh, could be soul-endangering errors, far different from disputes between Stoics and Epicureans or between followers of Herodes Atticus rather than some other sophist.

Despite these reservations, it must be said that this is an engaging book, written in a clear and often perky style, with some but not too much sociological jargon. Eshleman has read very widely, quotes her ancient texts in the original and translates them, and gives the reader much food for thought. To borrow a phrase from Arthur Darby Nock (Classical Review 12, 1962, 51), "As a first book, this ranks high indeed".