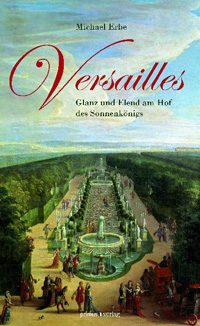 This is a short book about a big subject, relating the rise and fall of the most famous palace in Europe over the course of the seventeenth and eighteenth centuries. It begins with the purchase of a small estate of just forty hectares in 1623 by Louis XIII and ends with the arrival of the Parisian crowd in October 1789 to take Louis XVI and his family back to Paris as prisoners of the Revolution. It is a story that has been told many times before, of course, not least because of the natural attraction of any narrative including hubris and nemesis. Michael Erbe's retelling stands out for three reasons.

Firstly, it is attractively produced with many well-chosen monochrome illustrations, although ground-plans would have been welcome. Secondly, it provides a plethora of revealing statistics, for example that Louis XIV lavished 69,000,000 livres on the palace during his reign (or about €1,340,000,000 in present-day values), or that at the peak of construction activity in the 1680s, there were 60,000 workers on site. What had started out as a modest hunting lodge by then had become the largest palace in Europe, the centrepiece of a gigantic project to assert French cultural and political hegemony. By the end of the Sun King's reign, Versailles encompassed 1,800 rooms housing 1,000 nobles and their 4,000 servants. The two stable complexes, both in appearance and size worthy palaces in their own right, were home to 300 hunting dogs of various kinds and several thousand horses. In the course of the reign, the population of the eponymous town had increased thirty times. All these numerical superlatives were part and parcel of the intended effect: for representational culture, which Versailles exemplified, size really did matter.

A third feature of this fluently written and consistently entertaining book is the revelation of just how disagreeable was life in the palace. It was a gilded cage, certainly, but it was also extremely uncomfortable. The fundamental problem of water shortage was never solved, despite the failed construction of the 'Canal de Louis' which cost the lives of 6,000 workers from swamp-fever in 1687 alone. The result was an all-pervasive stink, a poisonous combination of stale food, sweat, urine and faeces, against which the liberal use of perfume struggled in vain. The washing of bed-linen was a particularly intractable problem. In these foetid condition, infectious diseases, from the common cold to smallpox and tuberculosis, thrived, along with rats, mice, fleas, bed-bugs, head-lice and all the other vermin which found in the palace an ideal-breeding ground. Infant mortality was an acute problem, even by the standards of the age, and no respecter of rank. Of the sixteen children sired by Louis XIV with his various mistresses, half died before reaching puberty. He lived to become the longest-ever reigning monarch in Europe but in old age was obliged to watch helplessly as three generations of Bourbons succumbed to disease, so that he was succeeded by his great-grandson. Staying warm in winter was impossible for most of the occupants, while those who succeeded paid a high price in smoke and the ever-present risk of conflagration.

The great fire of 1751 was started by the firework display celebrating the birth of Louis XV's first grandson. By that time, the Versailles project was in decline. As Erbe makes clear, its heyday was relatively short and was showing signs of decay even before the old king's death in 1715. The Regent, the Duc d'Orléans, promptly mothballed the palace and moved the court to Paris. When he reached his majority in 1723, Louis XV moved it back again, a possibly fateful decision in the long-run. As his long reign wore on, he spent less and less time there. Intelligent and well-meaning but also idle and self-indulgent, he turned increasingly to smaller, more private palaces, where the ceremonial routine was less demanding. Even at Versailles itself he had a suite of petits appartements built in the top two stories, where he could relax with his mistress of the day and a small circle of friends, a world apart from the representational space below. But the king was the centre of the whole enterprise and when he absented himself, it began to fall apart. Increasingly, the nobles found life there tedious and moved to smart new town-palaces in the capital. By the time Louis XV died in 1774, Versailles had become dysfunctional, promoting rather than suppressing opposition. It was also showing signs of age. Tobias Smollett recorded that it made a depressing impression, for all its superficial splendour, the rooms gloomy, badly furnished and unworthy of a sovereign. Erbe is good on this aspect of the decay of the old regime but has little if anything to say about the emergence of a counter-culture centred in Paris which triumphed in 1789. The revolutionaries spared Versailles only because demolition would have been too expensive. They did however sell off the contents, auctioning ca. 17,000 art-objects in the process. The enormous gardens were returned to agriculture. There is an interesting coda on the rehabilitation of the palace by Napoleon - for his own purposes, it need hardly be added; the return to neglect by the Bourbon restoration, dictated by penury; and the successful creation of a national museum by Louis Philippe after 1830. In summary, this is an agreeable introduction to the subject without pretensions to any great originality. There are a number of significant absentees from the rather short bibliography, the most obtrusive being Jeroen Duindam's comparative study of Versailles and Vienna.