Helen Berry: The Castrato and His Wife 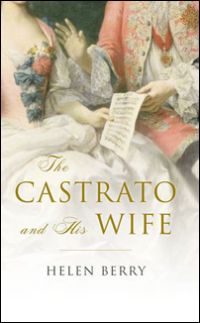 The story that is narrated in this book can be quickly told. Giusto Ferdinando Tenducci was born at Siena in 1735, was castrated at the age of thirteen, made his debut as an operatic singer two years later and then made a decent career in various Italian and German opera houses before moving to London in 1758. There he advanced from secondo uomo roles to principal, his big break coming when he created the role of Arbaces in Arne's Artaxerxes in 1762. In 1765 he moved to Dublin, where he formed a romantic relationship with Dorothea Maunsell, the fifteen-year-old daughter of a successful Protestant lawyer. In the autumn of the following year they eloped and went through a form of marriage of dubious legality conducted from his bed by 'an elderly infirm man' who may or may not have been a Catholic priest. It was not long before an irate father tracked them down and had his son-in-law imprisoned and his daughter kidnapped.

A year later they were reunited and married again, this time in a Protestant church. In 1768 they moved to Edinburgh, where Tenducci made a considerable reputation for himself singing the Scottish ballads that were very much in fashion. When Dorothea gave birth to a daughter in 1770, her husband claimed paternity. According to Casanova, who met him after a performance at Covent Garden, Tenducci claimed that he had 'a third testicular gland' which had been overlooked by his castrator. It is more likely that the father was one William Long Kingsman, with whom Dorothea absconded in 1771 and whom she married the following year. The original marriage with Tenducci was annulled in 1776 on the grounds of non-consummation. Nothing further is known about Dorothea, although it can be established that her second husband died in a debtor's prison in 1793, her daughter in 1800 and her son in 1802. Tenducci died in Genoa in 1790 after a career in which success alternated with imprisonment for debt.

As Helen Berry admits, the sources are thin. Chief among them is Dorothea's own account - The True and Genuine Narrative of Mr. and Mrs. Tenducci. In a Letter to a Friend at Bath. Giving a Full Account, From their Marriage to the Present Time, a 68-page pamphlet published in 1768. Composed in the best sentimental style of Samuel Richardson, this was very likely ghost-written. There is next to nothing written by Tenducci and only the very occasional - and often oblique - reference in the correspondence of third parties. Reports and reviews in the press are rather more revealing. There are five contemporary images of Tenducci, all reproduced here, including excellent portraits by Gainsborough and Thomas Beach. The most interesting is an etching entitled Fitz-Giggo, or The New English Uproar of 1763 showing Tenducci on stage during a performance of Artaxerxes, which is being disrupted by rioters protesting against admission prices. Rather oddly, Helen Berry appears to have missed the article by Roger Fiske and Dale E. Monson on Tenducci in The New Grove Dictionary of Music and Musicians and so has also missed one or two important other sources, most notably the Instruction of Mr Tenducci to his Scholars (London, 1782).

Given that almost a third of the book is consumed by footnotes, appendices and bibliography, this is not a long book. Even so, one cannot help feeling that a small amount of material is being spread thinly. There is a lot of speculation. For example, on just one page the narrative includes 'could have', 'may have', 'would have' and 'doubtless'. 'Not impossible' and 'it is likely' also appear frequently. So do scene-setting passages that could have been abbreviated or omitted to advantage. Here, for example, is the description of Tenducci's first visit to Dorothea's home in Molesworth Street, Dublin: "As he stepped across the threshold of the Maunsells' imposing home, this son of an Italian servant, who by then was no stranger to palaces, would have been ushered upstairs by the butler to the decorous surroundings of the drawing room, a public saloon customarily on the first floor in genteel Dublin houses with long floor-to-ceiling sash windows, long mirrors, and ornamented ceilings, furnished in the height of good taste, where guests were entertained after dinner to music, dancing, and card games". Indeed the book begins with a 'Prelude' that could have come straight from a historical novel by Georgette Heyer or even the Mills and Boon stable: "On this January night in 1735, the Spanish ambassador, Count Montijo, is hosting an assembly..." and so on. It is entirely in keeping with the book's tone that the front cover (which shows not Tenducci but Farinelli, another famous castrato) should be emblazoned with a round red sticker boasting 'AS READ ON BBC RADIO 4' and the back cover with a puff proclaiming it to be 'as light, bright, and sparkling as a glass of prosecco'.

It would be unfair, however, to dismiss this as the historiographical equivalent of 'chick lit'. As the prolific footnotes reveal, the author has read widely and deeply in the social and cultural history of mid-eighteenth century Britain and Ireland and has also mastered the appropriate theoretical literature, including that by Foucault. She has many interesting things to say about contemporary attitudes to sexuality, marriage and the family. There is certainly enough solid material here to sustain one article, or maybe even two, but inflating it to book-length rather devalues the currency.