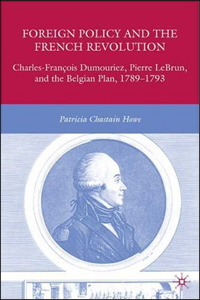 The death of the historical monograph may have been long predicted, or even announced, but this volume suggests that it is still very much alive in the USA. That a leading American publisher should take on what amounts to a doctoral dissertation on one episode of the foreign policy of the French Revolution for what can only be a library sale must give hope to other scholars labouring in the archives. Even more remarkable is the fact that the dissertation in question was completed at the University of North Carolina at Chapel Hill in 1982. Was a contract signed at that time but without a date for delivery? We are not told.

This volume has a simple but important thesis: that at the heart of the Revolution's foreign policy was a concern with 'Belgium', that is to say with the Austrian Netherlands and the Prince-Bishopric of Liège. That comes as no surprise, of course. Indeed, every historian of the Revolution has appreciated that events immediately to the north of the French frontier were important. As there had been serious disturbances there in 1787 and an actual insurrection in 1789, it could not be otherwise. This account gives events an original angle by concentrating on two particular actors - Charles-François Dumouriez and the lesser-known Pierre LeBrun.

After two short chapters providing the basic biographical information about her two main protagonists, Howe then provides a narrative of the conduct of French foreign policy between the meeting of the Estates General and the end of 1793. By that time, Dumouriez had defected to the Austrians and LeBrun had been guillotined. As an example of the Revolution devouring its own children, their fate is hard to beat. Their plan to create a united democratic Belgian republic (the 'Belgian plan' of the title) had long been doomed to failure. Partly that was due to the change of military fortunes in the spring of 1793, as the Prussians and Austrians began to take the war seriously. More depressingly for the aspiring liberators, it was also due to the dogged resistance of the intended beneficiaries. A French agent is quoted complaining about the 'coalition of fanaticism between the partisans of the former constitution and the supporters of Austria' (155). Enthusiasts for the Revolution were in short and diminishing supply, as the revolutionary armies rampaged across what had been one of the most flourishing regions in continental Europe.

However, whether Dumouriez and LeBrun's plan played a crucial role in 'the decision of French policymakers to declare war on Austria in April 1792 and in the expansion of that war to include Britain, Spain, and the United Provinces called the War of the First Coalition in 1793' (1) may be doubted. There was so much else pointing towards war, not least the war party's domestic agenda. This and other important aspects are dealt with either cursorily or not at all, not least because not enough space has been allocated. In just the twenty pages of chapter three the reader is whisked from 1789 to the eve of war.

The bulk of the book is then devoted to the further progress of the Belgian Plan. Much of this narrative is based on archival sources. The bibliography lists no fewer than twelve major archives that have been consulted, in Paris, Brussels, Liège and London. Unfortunately, they are referred to in the footnotes only by an abbreviation, without a precise location being listed. It is therefore impossible to determine what is new or what has been used by previous scholars and is here being reinterpreted. Subsequent historians will need to go to the original dissertation, which presumably includes full citations.

This is not the only respect in which this book sits uneasily between a research monograph and a book for a wider readership. The introduction sets out the stall with exemplary clarity but in less than satisfactory detail. Howe tells us that her two heroes have been dismissed by previous historians as 'a political adventurer, a crypto-royalist and arch-traitor' (Dumouriez) and 'an ineffectual bystander' (LeBrun) but the identity of those who have propagated these mistaken verdicts is not revealed. Nor are the authors of the 'standard interpretation' which sees the wars declared in 1792 and 1793 as being motivated by 'a miscarriage of revolutionary enthusiasm, a reckless Girondin crusade against kings, priests, and nobles'. (3-4) In the absence of attribution - and not one secondary work is cited in the introduction - it is difficult to avoid the conclusion that Aunt Sallies are being constructed here.

There is a further and related problem with the secondary literature. The 'bibliography of published sources', which includes both secondary works and printed collections of documents, is very much on the short side. Moreover, the relevance of some titles - Volker Berghahn's Germany and the Approach of War in 1914, for example - is difficult to appreciate. Although some titles published since 1982 appear in the footnotes, they appear to have been added as an afterthought. For example, in note 53 on pages 219-20, a claim that the decree of 19 November 1792 has been seen traditionally by Marxist historians as part of an attempt to distract the French people from domestic class conflict is supported by blanket references to works by Mathiez, Michon and Lefebvre. 'For more recent works', the note adds, readers should consult books by Jeremy Black, Paul Schroeder, John Ehrman and Tim Blanning, but again no page references are provided. The apparent implication that these four will offer further Marxist perspectives can be ascribed to syntactical shortcomings. More serious is the complete absence of any recent work in the French language on the foreign policy of the Revolution in general and Dumouriez in particular, of which there has been a good deal. In short, although based on what appears to be a formidable amount of archival research, this is a perplexing volume, both in its original conception and its current form.