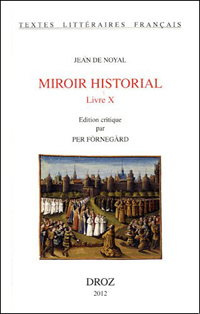 The Miroir historial is one of those fourteenth-century universal chronicles, whose author/compiler, in this case Jean de Noyal, the abbot of Saint-Vincent of Laon, had a very narrowly bounded geographical conception of the universe. Most of the surviving text deals with France (including the Franco-Flemish wars), the Holy Roman Empire, and papal policies. There are also short asides on local affairs in and around Laon. The rest of the known world is scarcely mentioned.

Author or compiler - which term more accurately describes Abbot Jean? Issues about authorship can be quite knotty when dealing with modern texts. They are often exponentially more complex in dealing with medieval ones. The editor of the Miroir historial, Per Förnegård, estimates that 99% of the present edition of approximately one hundred folios was taken, sometimes verbatim, from other sources. But he distances himself from nineteenth-century scholars, who in their fetishistic desire to find 'original' material, regularly and rather imperiously condemned such productions. Indeed, rather than edit these texts whole, these earlier scholars merely plundered them. Large numbers of such texts, therefore, remain to be published in critical editions. Förnegård insists that figuring out the method of compilation and the selection process (choosing what to excerpt for compilation) in these texts will provide valuable insights into what might be called the mentality of the chroniclers' world.

Förnegård is obviously correct in this surmise, but the task is a difficult one. We know that one motivation for Jean de Noyal in the late fourteenth century (he was abbot from 1367 to 1396) was to rebuild the library of Saint-Vincent which had suffered considerable losses at the hands of English troops in 1359 during the Hundred Years War. But why did Jean de Noyal think it necessary to have a universal chronicle of the sort he put together in the reconstituted library? Why did he refuse to harmonize the various orthographies and the variations in noun and verb endings of the French in the texts from which he borrowed when he incorporated them into his own work? What principles underlay his selection of certain earlier chronicles to pillage? Mere availability or something deeper and still waiting to be fathomed by scholars? As for the texts he did choose, what explains his selection of certain passages and omission of others? How did he expect his monks to use the universal chronicle? And so on. Förnegård is also right, therefore, in reminding his readers that work on matters like these will require close attention to all aspects of this particular universal chronicle and mutatis mutandis similar texts.

To this end and in addition to an introductory discussion of Jean de Noyal's sources, methods, and the manuscript tradition of the chronicle, Förnegård has provided his edition of the Miroir historial with an apparatus that goes far beyond that usually encountered. In particular, Förnegård has assembled an extensive index verborum which displays the entire range of variant orthographies in the chronicle, including nominal and verbal forms. It is to be hoped, as Förnegård remarks, that future editors of similar texts will do the same. From systematic comprehensive comparisons, which should be relatively easy to make in the digital age, one may eventually be able to reach very persuasive conclusions about what might be called the boundaries of the universal chronicle genre - what tropes, conceits, and usages were more or less fixed and which ones were more flexible - and one might be able to do so with a precision which would have been impossible for earlier scholars to achieve. Whether the results will in turn transform received wisdom about the literate culture of the fourteenth century remains to be seen, but the possibility that they might justifies the effort. Förnegård is to be congratulated for providing an excellent model for how to carry this enormous project forward.