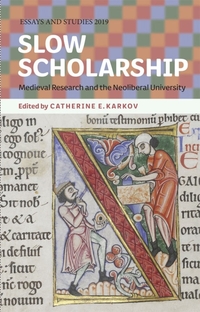 Taste matters - but de gustibus non disputandum est. No doubt, a subset of medievalists will savor this little collection of essays because of its ideological aggressiveness. Each author (the editor, Catherine Karkov, twice, "Introduction" and "Thinking about Stone") bashes British universities at considerable length, particularly their complicity in and submission to the REF (Research Excellence Framework), which emphasizes production of humanistic scholarship expeditiously and with measurable value to society, the model being that of the STEM disciplines. "REF is . . . a tool of the neoliberal corporate university. It keeps us busy producing 'outputs', creating 'impact', bringing in profit in the form of research grants or spin-off companies" (5). It is "metric-obsessed" (100). We start "scrambling to produce an arbitrary number of 'REFable publications" (20). Universities have become havens of a "managerial audit culture" (151). Unchecked this evil will kill in the manner of "the boiling frog scenario. If you drop a frog in boiling water it will leap out, but leave it in cool water and turn up the heat bit by bit, and it will remain still and allow itself to be boiled to death" (7). Defiance, resistance, the creation of new spaces and times for research are, thus, imperative and heroic: "I translate [Old English] not with the REF . . . in mind, but almost as an extracurricular pastime" (33).

By implication - and occasionally explicitly - the authors accuse universities in liberal states all over the world as being fellow travelers. "REF is a UK problem, but the corporate ideology and structure, and the way in which it forces scholars to be complicit in maintaining both are, if not universal problems, all but universal problems" (5). REF is similar to "the adjunctification of higher education in the United States" and the degradation of the "educational system" is a consequence of "managerial and commercial pressures" (126 and 147).

Maybe, the answer is to slow everything down. Genuine humanistic research is slow. Hence, the title of the collection and of the four units of two articles each that constitute it, "Slow Collaborations," "Slow Words," "Slow Looking" and "Slow Manuscripts." The phrase "slow collaborations" implies that scholars need (often) to work together to achieve deep results ('deep' is another word invoked repeatedly in this collection). "Some [collaborations] are planned, some are the result of chance or serendipitous encounters, but the most fertile ones are often those that are furthest from the business partnership models advocated by so many universities and research councils" (9). Slow collaborations reach across time and being, almost like mystical experiences in a few of the authors' descriptions: Things, "like words, have agency, . . . they also have a stubborn materiality that cannot be replicated, and that unfolds itself slowly over time, creating ghosts and doppelgangers as the centuries pass by" (12). Establishing collaborations, say, with artists, is a slow process especially for the resource-poor 'precariat' (9 and 19), whether independent (unemployed) scholars or full- or part-time adjuncts. For them it might be "unrealistic . . . to acquire the many languages and specialisms necessary to discuss" the objects of their interest (20), on which they otherwise have much to add to the existing body of knowledge.

The section on "Slow Words" addresses translating. To go fast is inevitably to miss the deep meanings of poetry. Slow reading "is slower than REF-cycles" (62). The much-put-upon tone of Professor Chris Jones's article, "Re-lining the Grave: A Slow Reading of MS Bodley 343, fol. 170r," from which I have quoted, provokes one to raise an issue barely mentioned in the essays. That issue is the accusation that the defenders of slow scholarship - the self-declared victims -are guilty of their own "neoliberal agenda" to recuperate the elite status of the humanistic professoriate and reconfirm its conservative biases. For when first articulated, the slow scholarship movement, as Karen Louise Jolly notes, was not particularly drawn "to feminist scholarship and political activism" (126). Those who are suspicious of the slow scholarship movement, its online manifesto, and the programmatic book, The Slow Professor, by Maggie Berg and Barbara Seeber, which all the essays gesture to, may very well take the tone of Chris Jones's article as self-evident proof of a problem. Does a humanist really have to indulge in narrating what seem, at least to this reader, barely relevant, even if moving, incidents of his personal life - his grandmother's funeral, his bad break up with a love interest, his father's breakdown at the burial of the author's grandfather (61, 66 and 75)? Is it helpful in any way for him to report his - to me somewhat dismissive seeming - refusal to take his copyeditor's advice (63 n. 11)?

Slow looking? It means returning to an object repeatedly. It means imagining its use. It means wondering - thinking deeply - about how environmental changes modified the apprehension of the object. Slow, slow, slow - is the watchword. It involves discerning "meanings that circle [in this case, the Ruthwell] cross, that spiral backwards and forwards through history, that haunt the cross and its history, and that can't always be pinned down within historical sources." (Is there a methodological problem here?) "The cross is elemental, the creation of earth, fire, water and air. I want," writes the editor "to think about what that means to the meaning of the cross" (101-02). Breathtaking writing, even if not so clear. "Haunt" once again seems to me to gesture to the almost mystical aspect of the slow scholarship movement.

The authors frequently invoke the slow food movement, which began in Italy in the late 1980s, as an inspiration for the slow scholarship movement (3, 31, 100, 128 and 146). Fast scholarship is like fast food, burgers from McDonald's, which were the explicit target of incensed slow food enthusiasts. Slow cooking is a synonym also invoked in the essays (12 and 100). Slow is a mantra. My favorite article in the collection, Karen Louise Jolly's "Letter by Letter,' which is in part an admittedly imaginative reconstruction of how a scribe must have interacted with his community in early medieval Northumbria, can be critical of the slow scholarship movement. She points out a number of shortcomings, but she remains loyal. In the first five paragraphs (125-27), she makes this clear not only in saying so in paragraph four, "I am a slow scholar," and in the sixth paragraph at greater length. She also does so by a relentless invocation of slowness from the very first sentence of the article. She invokes "slow 'traditional' methods,' "slow, deep immersion," the "slow dance," and "slow process," while also managing to call as witnesses the online "Slow Scholarship Manifesto" and Berg and Seeber's The Slow Professor. Such overuse runs the risk of coming off as special pleading.

Yet, Jolly's article and the other articles, stripped of or at least unburdened from a good deal of their explicit ideological baggage, go very far toward making the case for slow scholarship. For when they report substantive scholarship they are all technically dazzling, erudite, provocative and, as far as I can discern, strikingly original contributions to medieval studies, particularly studies on early medieval Britain. Lara Eggleton's contribution is something of an outlier, but only in terms of subject, concentrating as it does on the Alhambra and its post-medieval future. Otherwise, it is simply brilliant. James Paz's and Chris Jones's substantive work on the two Anglo-Saxon poems, "The Order of the World' and "The Grave," respectively, are explosive in their importance. I excluded consideration of monumental British crosses, the subject of the articles by Heather Pulliam (the Irish high cross of Clonmacnoise) and by the editor, Catherine Karkov (the Ruthwell Cross in historic Dumfriesshire), from a series of studies I once did on Passion iconography early in my career. I did so because I did not understand them and did not trust those who thought they did. Nevertheless, Pulliam and Karkov jolted me by the power of their readings (see especially 87-96 and 112-19). Karen Louise Jolly and Andrew Prescott are evenhanded in their discussions of the value and limitations of slow scholarship and of what is often viewed as its reverse, recourse to digitization, in their articles on scribal practices and manuscripts. Jolly focuses on "Aldred's Northumbrian Old English gloss of the original collectar in Durham A.IV.19" (125). Prescott admires much of the work but criticizes the paradigm under which digitization of insular manuscripts (compare "boutique digitisation," 160) is now taking place. Taken together these two articles made me a convert to their approach, no matter what one wants to call it.