Michael L. Miller: Rabbis and Revolution. The Jews of Moravia in the Age of Emancipation, Stanford, CA: Stanford University Press 2011 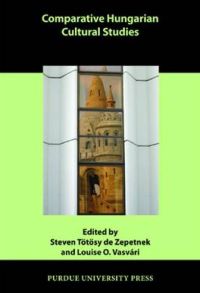 The way Steven Tötösy de Zepetnek and Louise O. Vasvári envision it, cultural studies is meant to explore cultural and social contexts to understand "the metamorphosis of the notion of culture itself" and it ought to provide a cultural critique that "extols the virtues of eclecticism and embraces a holistic and democratic view of culture" (12). The two editors even evoke an "inclusive, multilingual, intertextual, interdisciplinary, and transnational" scholarly perspective "in theory and application" (25).

Such maximalist declarations may sound immodest, but the rather flexibly defined field of cultural studies carries undeniable intellectual promise. Some of the most exciting scholars of Hungarian culture are currently pursuing agendas more or less compatible with such a historicist-integrative program. While relevant researches are conducted across a variety of disciplines within Hungary, the institutionalization of cultural studies has significantly progressed in recent years when scholars at ELTE Budapest and the University P&#233cs previously affiliated with literary studies have led the way. Still, the editors rightly emphasise that the accomplishments of cultural studies within Hungary remain somewhat patchy. The situation looks rather different in the English-speaking academic world where more than half of the altogether twenty-six contributors of the volume are primarily active. The volume can thus be considered a significant achievement in bringing together novel research projects even without meaning to provide a representative sample.

Numerous thoughtful and intriguing studies largely validate the promise of the editors to offer "theoretical rigor" and "in-depth scholarship" (7). In some respects the volume is nonetheless rather awkward. First, the word "comparative" in its title hardly seems justified. The majority of studies do not aim to systematically compare Hungarian with non-Hungarian phenomena and intra-regional comparisons are hardly attempted. This is essentially a volume in Hungarian cultural studies. Second, the volume recurrently draws inspiration from the broad thematic areas covered by gender and Jewish studies in particular. This implies that it does not offer anything approaching a comprehensive coverage of basic cultural groups and themes of historical or contemporary Hungary.

Third, the editors declare that postcolonial analysis ought also to be extended to Hungarian culture, but do not clarify the benefits and limits of such an application in detail. In my assessment, the explicitly postcolonial analyses included in the volume tend to be among the least convincing - which is to say nothing about the heuristic value of such approaches but perhaps reveals something about their current level of sophistication. Fourth, the editors wish to extol the virtues of "explicitly ideological" scholarship (12). But how might one reconcile ideological approaches with the recurrently emphasised principle of dialogue? Fortunately, most authors in the volume manage to avoid overt (self-)ideologisation without thereby forgoing political agency.

In spite of these discrepancies the volume features excellent articles. There is Györgyi Horváth's outstanding "Hungarian Literary Criticism and the Memory of the Socialist Past" that directly tackles the problem of scholarly autonomy and political engagement. Horváth's study aims to uncover hidden preconceptions about the function of literature in Hungary. She argues that there are pervasive preconceptions about the right kind of relations between the aesthetic and the political realm that disregard and even silence reflections on the political, social and ideological contexts and subtexts of literature.

Horváth presents the Hungarian narrative of the emancipation of literature from political intrusion as dominant and anachronistic. Her study aims to show how the tenets of progressive criticism from before 1989 were maintained even though they changed their political-ideological function in the new environment. In her eyes, the continued apolitical or anti-political strategies of the middle generation of Hungarian scholars distance them from their Western colleagues who do not shy away from democratically oriented literary-political criticism. Horváth thus finds that "Hungarian literary criticism and scholarship has not progressed on the road to a cultural transition leading to democracy" (99).

In an even more explicitly critical and political study, Erzs&#233bet Bar&#225t diagnoses a cultural backlash against female citizenship and empowerment. She argues that while non-normative sexuality is made visible as "a matter of glamour and entertainment" in our spectacle-loving societies (Guy Debord), the politically effective articulation of sexual difference seems to be lagging far behind (199). Her text exposes "the invisible, hidden heteronormative structuration of the field of party politics" in both the United States and Hungary (200). Bar&#225t pictures tendencies in the two countries as largely parallel and views the act of their simultaneous exposure as a scholarly-political contribution to an "inclusionary politics of identity".</p> <p>All this may sound rather abstract for a political intervention but Bar&#225t's empirical analyses identify the problems that concern her in a convincing manner. The central one is how the sexualization of female bodies - specifically the heteronormative significance of female corporeality - makes the idea of a female political leader seem a contradiction in terms. Bar&#225t shows that such a gendered context damaged the presidential candidacy of Hillary Clinton; she had to avoid seeming "too mannish" (i.e. not quite like a proper heterosexual woman) as well as "too feminine" (i.e. not quite like an able political leader) and was thus trapped.</p> <p>Gender is also among the main themes of N&#243ra Schleicher's "Women Managers Communicating Gender in Hungary". Relying on participant observation and symbolic interactionism as her interpretative frame, Schleicher is not simply interested in the complex interrelations of gender, language and the workplace. She also aims to inquire into the appropriate use of gender as an analytical category and proposes that "it is more useful to conceptualise gender not as an attribute that one has or does, but, rather, as a domain filled with meaning (specific to the given community of practice) about 'man' and 'woman'" (241). Her results suggest that gender has an indirect effect on communication: people construct leadership qualities such as expertise, honesty or courage, which are in turn gendered. Thus, women in higher positions have to react to the gendered perception of these qualities and make an additional investment to acquire the reputation of possessing them.</p> <p>Among the numerous studies on Jewish themes, "About the Jewish Renaissance in Post-1989 Hungary" by Kata Zs&#243fia Vincze stands out as the most complex and comprehensive study on recent and ongoing developments. She demonstrates that the ethnic renaissance in Judaism is particularly widespread among members of the so-called third generation (i.e. the grandchildren of Holocaust survivors), alongside which she finds a massive tendency to conceal Jewishness. Vincze argues that the Jewish revival, although it proceeded by religious gestures and behavior, was "often a reconstruction of the distinct cultural and ethnic identity, rather than a return to real Jewish religious life" (265). Particularly interesting is her identification of a second wave of Jewish renaissance that took place after 2000. She maintains that the first wave was about rediscovery and learning, while the second evoked a positive, expressive and pluralistic sense of Jewish ethnicity leading to a cult of being different. This latter revival had positive effects on Hungarian society at large. Going against many an analyst of political trends, Vincze concludes that many non-Jewish Hungarians seem to know more about Jews and show more sympathy towards Jewish culture than they did before.</p> <p>Having no space to discuss further valuable studies such as those by Anna Borgos, Andr&#225s Kis&#233ry, Ivan Sanders or Louise O. Vasv&#225ri, I would simply conclude that this volume is a rich and rewarding collection that, as a whole, nevertheless reconfirms that Hungarian cultural studies are fraught with ambivalence. It shows some of the major strengths of current research on Hungarian themes but also reveals their thematic limitations. In spite of numerous significant achievements, the overarching inclusivist ambitions of a truly comparative Hungarian cultural studies are clearly yet to be realised.</p> <p class="italic" style="text-align: right">Ferenc Laczó</p> </div> </div> </div> <div id="page_footer"> <div class="ie6_font_size" id="separator"></div> <p>issn 1618-6168 / www.sehepunkte.de <img height="10" src="/images/sp10.jpg" width="10"> </p> </div> </div> </body> </html>