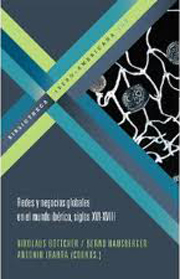 By raising new questions and debates, historians have highlighted the importance of social and mercantile networks in history over the last two decades. In papers and articles on early modern commercial expansion and in debates developed by the New Institutional Economics (NIE), social networks have become essential, especially those concepts closely related to networks of trust and information. More specifically, in the context of early modern history, mercantile networks have been placed at the very centre of historical analysis, not only because networks and their effects are considered essential for the understanding of, among other things, the commercial expansion that took place from the sixteenth to the eighteenth centuries. Furthermore, studies on mercantile networks from the perspective of social network analysis is improving our understanding about the way in which commercial agents overcame the enormous barriers that hindered global trade during the early modern world via reducing transaction and risk costs.

Redes y Negocios Globales en el Mundo Ibérico, Siglos XVI-XVIII is a great contribution to this historiography on the early modern Iberian Atlantic World. In this collection of essays each chapter addresses different and apparently disconnected case studies. However, all contributions share "the conviction that the concept of network is a useful tool to give new perspectives to our respective topics, and, more specifically, to deepen our knowledge about mercantile networks and commercial relations in the Hispanic world between the late fifteenth century and the beginning of the nineteenth century" (12).

In the following, I will not offer a summary of each of the eleven chapters not the least as a good summary of these can be found in the final article of the book by Eric Van Young (289-309). I think that a summary organised into issues and questions raised in the book would be more useful: Most chapters are empirical texts; they are precise case studies of mercantile networks, their formation, characteristics, economic performance, and reorganisation when facing economic and political setbacks; they draw on different historical moments and geographical areas of the early modern Iberian Atlantic World.

There is little ground for theories and concepts. There are, however, three exceptions by Montserrat Cachero Vinuesa, Bernd Hausberger, and Eric Van Young. Cachero Vinuesa and Hausberger draw on the role and limits of mercantile networks in reducing transaction costs in long-distance commercial exchange, while the latter makes a brilliant attempt to define what a social network was in the early modern period.

All other chapters do not explicitly address concepts or theory. However, they make important historiographical contributions to Atlantic studies, specifically regarding the role of networks in the Iberian Atlantic trade. Almost all chapters emphasize asymmetries as well as the diachronic dimension of mercantile networks, that is to say hierarchy and change over time in the interaction between, and performance of, networks. Furthermore, almost all authors stress the importance of political power in mercantile networks. This becomes most evident in Guillermina del Valle Pavón chapter, in which she analyses how the merchant guild (consulado) of Mexico's merchants adapted their political strategy regarding the eighteenth-century Crown's policy of trade freedom differently according to their economic interests.

Most chapters use a global and trans-'national' approach for their respective case studies. They thus move beyond national and imperial scales of analysis and also stress the importance of flow, circulation, linkage, and connections: Ana Crespo Solana studies the commercial interactions between Dutch commercial networks and Spanish networks and institutions; Nikolaus Böttcher analyses the English influence on the development of commercial agriculture of sugar in Cuba during the second half of the eighteenth century. Finally, the idea that early modern commercial networks were not only mercantile, but were based on other types of relationships (kinship, religious affiliation, same geographical origin of their members, and so forth) is very present in all chapters. The importance of relations other than commercial in supporting pre-modern trade networks is not a new idea. It has been already been made evident by authors such as Avner Greif. This book is a rich example of the many types of social relations and the way in which they worked and interacted with commercial networks in long distance trade.

The theoretical and historiographical interest of this book lies in at least three points. Firstly, this book is a contribution to the history of trade in the Atlantic World. For this reason alone this book deserves to be read. Furthermore, the book allows reaching conclusions about what mercantile networks looked like in the early modern period. This is of no little importance, since systematising the main characteristics of mercantile networks (durability, informality, their basis on and interaction with other types of social networks, etc.) within the precise context of early modern trade is extremely useful for historians who deal with long-distance trade in the early modern Atlantic World. Thirdly, although most authors of the book do not explicitly place their chapters in the theoretical and conceptual apparatus of New Institutional Economics (a notable exception is the chapter by Cachero Vinuesa), the book can be read as a contribution to the NIE within the context of the early modern Hispanic World. This is remarkable, because this book facilitates future comparisons between formal and informal institutions, and their effects on the economies of the northern and southern European countries. Comparisons between institutions of northern and southern European empires, particularly between England and Spain, have been initiated by one of the main contributors to the institutional analysis of economy, the Nobel Prize winning Douglass C. North, followed by other scholars later. However, there still is much work to do with regard to systematic comparisons between northern and southern European empires.

In conclusion: Anybody interested in the early modern Atlantic World, and commercial networks in the early modern period more specifically, could gain from this edited volume as it improves our knowledge of mercantile networks. This book is a step forward regarding the previous works of the editors of the book which had mostly focused on eighteenth-century New Spain. Furthermore, it is also useful because the authors of this book describe and analyse mercantile networks in order to answer questions which are at the very centre of highly topical debates, such as the role of trust and information in commercial development, and the debates on networks as institutions that either favoured or hindered the reduction of transaction costs in early modern trade.