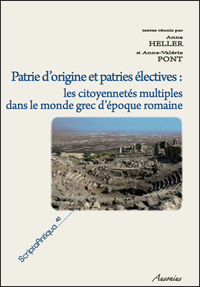 In this book, the acts of an international colloquium held in Tours in 2009 are published. It constitutes the first systematic attempt to study not only multiple citizenships as a historical phenomenon but also the special relationship that a citizen could have with his native polis (patrie d'origine) and with other political communities (patries électives) situated in various geographical areas in a longue dur&#233e perspective from the late Classical to the Roman period.

The book is divided into three parts. But while the first one focuses on the Greek precedents of the multiple citizenship of Roman times ("Ant&#233c&#233dents grecs et cadre romain"), the distinction seems less clear between the second part, dealing with a special category of multi-citizens, that of professional sportsmen and members of the ruling and intellectual elite ("Notables, athl&#232tes, sophistes"), and the third, devoted to local and regional particularities ("Hell&#233nisme imp&#233rial et cultures r&#233gionales"). Even so, the thorough introduction of the editors, Anna Heller and Anne-Val&#233rie Pont, as well as the pertinent conclusions of Olivier Picard put perfectly this debate into the historical evolution of mutual influences between the Greek world and the Roman Empire. </p> <p>Almost all the authors agree with the thought of Louis Robert and Philippe Gauthier, according to whom the <i>politeia</i> granted to someone by honorific decree was in fact a potential citizenship; it could be effective only if the person came to be installed in his new city. Another common point, at least among the authors of the first part, is that the possession or even the accumulation of local citizenships within the <i>koina</i> is not a sign of the decline of the <i>polis</i>, but an indicator of the development of federal organization in post-classical societies. </p> <p>Athanase D. Rizakis and Julien Fournier give an overall view of the subtleties of this double <i>politeia</i>, local and federal, against the background of bilateral civic agreements, diplomatic relations, and commercial exchanges in the Hellenistic <i>koina</i>. In this sense multiple citizenships could be a result of the creation of inter-civic networks, as in the case of the Meander valley and Carian cities in the aftermath of the Mithridatic Wars (Thibaut Boulay), or they could respond to more individual or non-political needs, as Madalina Dana's paper illustrates: the possession of several Black Sea harbour cities' <i>politeiai</i> by businessmen (shipowners and traders) was not an obstacle even during the Hellenistic period, when these cities belonged to different states. Ivana Savalli-Lestrade sees the collection and the epigraphic display of several local citizenships as a means of self-celebration of notables, a practice which enjoyed a revival under the Empire, this time mainly among athletes and performers (Onno van Nijf). But this Hellenistic model could not function under the Principate, since Roman citizenship imposed a different set of relations between the "patrie de naissance" and the "patrie de droit". It is exactly this contradiction between <i>civitas romana</i> and local <i>politeia</i> that S&#233gol&#232ne Demougin's paper demonstrates with representative examples from the western provinces, although on a practical level a slight influence of Greek practices could be discerned. </p> <p>The need to evaluate and to measure the extent of possession of local citizenships among members of various social classes and professional circles leads the authors of the second and third parts of the book to provide the field with some of the best methodological tools. So, the weak diffusion of double <i>politeiai</i> among local priests of the imperial cult in Asia Minor (Gabrielle Frija) or among members of the aristocracy in Asia Minor (Anne-Val&#233rie Pont), and particularly in Ephesos (Fran&#231ois Kirbihler), as well as in the Peloponnese (Anna Heller), is considered an indicator for establishing degrees of the hierarchization of the highest social class and a chronological marker of the social elevation of families based on matrimonial strategies and often followed by geographical mobility. </p> <p>Contrary to aristocratic behaviour, the epigraphic display of both the accumulation of citizenships and the pride in athletic victories was a major source of self-representation and personal identity for athletes and performers, serving as a kind of "badges of individual status" under the Empire (Onno van Nijf, 184). Denise Reitzenstein also confirms a clear demonstration of multiple <i>politeiai</i> in the geographical and political context of the Lycian <i>koinon</i> according to regional epigraphic habits. Christina Kokkinia dissociates the "<i>politeuomenos</i> in all Lycian cities" formula from the notion of federal citizenship, while Henri-Louis Fernoux examines in a diachronic way, from the law of Pompey to the legislation of Augustus and the decisions of second century emperors, the judicial background of multiple citizenships in Bithynian cities whose flexibility responded to political developments and met the social and economic needs of the communities. Denis Knoepfler provides a different approach: starting from the rather astonishing cases of the non-Beotian Beotarchs, he uses the evidence of multiple citizenships to conceptualize the geographical extension of the Beotian koinon during the Roman period. </p> <p>The papers of Bernadette Puech and Christopher P. Jones consist in a parallel study of cases. Puech attributes the display of multiple citizenships in two distant cities, Delphi (Greece) and Chersonesus (Black Sea), to a common sense of belonging simultaneously to various milieux: the city, the cultural sphere of Hellenism, the Roman Empire. Through the personal experience of the multi-citizen philosopher Dio of Prusa (or Chrysostom), Jones critically approaches various mentalities and common criteria of bestowing citizenship: possession of wealth, popularity and wisdom of the candidate. </p> <p>The main contribution of this multi-authored volume lies in the confirmation that the possession of several citizenships cannot be considered a homogeneous phenomenon: the concept of <i>politeia</i> was always dependent on civic traditions, local identities, federal laws, economic needs, social transformations, and regional epigraphic habits in the constantly changing political networks of the Hellenistic world and the Roman Empire. Proceeding by different ways of thinking and using a large variety of historical sources (see the indices), the authors demonstrate that despite a more or less uniform cultural environment of the post-classical world, it was rather the local or regional particularities that finally prevailed and marked the phenomenon of multiple citizenships. Finally, it is worth noting that the careful avoidance of formulating and applying historical theories in this book should help to spare future research from problematic methodological trends.</p> <p class="italic" style="text-align: right">Maria Kantirea</p> </div> </div> </div> <div id="page_footer"> <div class="ie6_font_size" id="separator"></div> <p>issn 1618-6168 / www.sehepunkte.de <img height="10" src="/images/sp10.jpg" width="10"> </p> </div> </div> </body> </html>