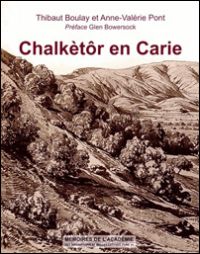 This handsomely produced slim volume is, in the words of its authors, a 'parcours épigraphique' around the minor Karian city of Chalketor; a set of five studies inspired by documents kept in the Fonds Louis Robert in Paris. The book is both an homage to the work of Louis and Jeanne Robert, whose presence is felt throughout its pages, and a continuation of the Roberts' engagement with the Karian landscape and its history.

In the first three chapters, which focus on the fate of the small polis of the Chalketores in the Hellenistic period, the authors challenge established assumptions about the political configuration of this complex region of western Karia. Their line of argument is not, however, without problems: see below. In chapter V they take the city's history to its conclusion, presenting the evidence for a senatorial estate at or near Chalketor (though not, in my view, succeeding in proving the Iasian origin of its senatorial owners). Chapter IV's lengthy discussion of imperial eponymy in the cities of western Asia Minor takes its cue from the eponymy of Trajan in one of the inscriptions in the epigraphic appendix or Corpusculum. Despite the justifications given (15), it seems of doubtful relevance to the book's central theme.

The starting point of the book's main argument are three unpublished inscriptions (A, B and C in chapter I; 8, 9 and 10 in the Corpusculum), found and copied on the site of Chalketor (modern Karakuyu) by Louis Robert. The oldest, mentioning a strategos epi chôras, can on prosopographic grounds be attributed to Iasos and dated to c. 130 BC. The second, whose eponym is the emperor Trajan, mentions a Iasian citizen as paraphylax tès chôras. In the third an early imperial strategos epi tès chôras is attested. The characterization of these inscriptions as 'listes de magistrats' (27) rests on the assumption that a further name should be restored in A5 (where, at the end, I clearly read ΠΑ); but to deuteron in A6 may in fact refer to a further activity of Theodoros himself.

These inscriptions show, unexpectedly but convincingly, that Chalketor, autonomous still in the mid-fourth century (34-35; the Iasian decree discussed here dates to the 360s, not 425!), had become part of Iasian territory by the 130s at the latest. This is surprising, because the city's location in the southern Euromis plain suggests a connection with the communities east of the Grion massif: with Euromos, Mylasa, Olymos, not with Iasos, which lies at that mountain's southern extremity on the northern shore of the Little Sea, across the water from Bargylia.

Chapter II explores the wider political context in which the incorporation of Chalketor may have taken place. Crucial here is a well-known decree (2) found in the late 19th century at Chalketor, in which, on the authority of an anonymous king, the Chalketores are to be added, in a sympoliteia, to the territory of another city. The king, the other city, and the date are unknown; only the name of the royal official responsible, the strategos Iason, survives. Until now, the larger city was assumed to be either Mylasa or, more likely, Euromos, whose refoundation in 201 as Philippoi by Philip V appears to have involved the incorporation of a number of smaller communities. Boulay, after rejecting (too hastily?) an Antigonid context and a connection with the refoundation of Euromos (37), focusses on the identity of the strategos Iason. Is he identical with Iason son of Minnion, attested in an inscription of Theangela, of whom Christian Marek suggested that he was a Ptolemaic strategos? After a review of the political forces at work in western Asia Minor, Boulay concludes that there cannot have been a Ptolemaic presence in the Euromis capable of instigating the sympoliteia after the end of the third Syrian war (241 BC). He then argues that Iason son of Minnion was not a Ptolemaic but rather a Seleukid official, by linking the decree in his honour to a second one from the same city which, in identical lettering, grants citizenship to a certain Minnion, Antiocheus. This man is usually identified with a high-ranking philos of Antiochos III. Boulay suggests that he was Iason's father and that both were Seleukid officials. Though this seems plausible, the dates of the assumed father and son pair are uncomfortably close if both were active in the service of Antiochos III in the 190s.

The next step is however problematic. To associate the strategos Iason responsible for handling the Chalketor sympoliteia with Iason son of Minnion, active at Theangela, is - one can see it - irresistible. But is it right? In order to strengthen his case, Boulay fixes the date of the sympoliteia decree (2) to the 190s, and decides to date to the same period two further fragments (3 and 4), linking both directly to its circumstances. Although mere fragments, both appear to be concerned with a situation of dramatic change: ateleia, freedom from taxes, and boethesein, 'assist' in 3 (l. 3, end should read τε not τι); while 4 has stathmous kai nomous, 'lodgings and pasture-land' (not 'lois', as Boulay translates, 54). That 4's eleutheras doul[- -] or doula[- -], can be understood as 'un passage de la servitude à la liberté' (54) seems uncertain, and ignores the feminine plural form. The letters of the sympoliteia text, which survives in two printed majuscule copies of the 1880s, show characteristics of the third century, including a ksi with a vertical bar (the ksi in the Theangela decree for Minnion has three horizontals), and neither is an early second-century date secure for 3 and 4. The honorific decree 6, inscribed on the same block as 2, is given a date in the second century 'after the sympoliteia' (63), but again looks earlier in the printed majuscule text (in n. 182 the possibility of an earlier date is acknowledged). The conclusion, that the sympoliteia supervised by Iason the strategos was with Iasos, and should be linked to the benefactions given to that city by Antiochos III and Laodike after the liberation of the city from Philip V in 197 (in a letter Laodike promised to sunauxein to politeuma: 'increase the citizen body') is interesting and possible but rests on fragile assumptions.

In the third chapter a reassessment of the territory of Iasos is attempted, especially vis-à-vis that of its two main neighbours Mylasa and Miletos. The authors follow Robert in attributing the Kazıklı peninsula west of Iasos to Miletos, and pose the question where precisely the boundary lay between the two cities' territories. In light of what has been suggested about Chalketor's incorporation into Iasian territory, the 'inconvenient' location of the community of the Hydaeis is then discussed. Louis Robert long ago suggested that this small polis should be sought at the extreme southern tip of the Grion range, above the village of Damlıboğaz on the northern shore of the Little Sea, where there are ancient remains above the village and in the plain below. But a) this would put Hydai precisely between Iasos and Chalketor and so break the contiguity of those two cities' territories, and b) the little epigraphic evidence we have about the Hydaeis puts them firmly within the Mylasan sphere. The authors argue that the Hydaeis must therefore be sought further up in the Euromis plain. They are right to pose the problem, but the discussion leaves quite a few loose ends: where does it leave the site at Damlıboğaz, and how easy is it to find alternative locations for the Hydaeis?

Despite the qualifications here expressed, this is an important and interesting book. The attempt to bring some topographical logic into the relative position of Miletos, Iasos and Mylasa, is worthwhile and will surely inspire future research.