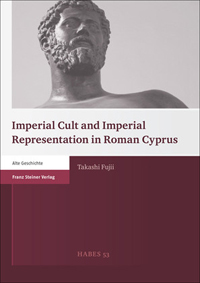 This book is the publication of Takashi Fujii's PhD thesis. It deals with the imperial cult as the most important of the forms that the imperial representations in Roman Cyprus took. In the introduction the author lays out his objectives, offers an analysis of his method and reviews the previous bibliography. The whole work is very well structured around three major themes. In the first part, Takashi Fujii examines the various ways in which the Roman emperor was represented and focuses on honorific vocabulary and cult epithets, statues and iconography, monuments and landscape, and on an important inscription attesting the Cypriot oath of allegiance to Tiberius. In the second part, he studies the political and social settings of the imperial cult, paying particular attention to rituals and priests. In the third part, he places the emperor in the everyday life of Cypriots and deals with festivals and the calendar. At the end of the book the author offers a useful appendix including ninety Greek and Latin inscriptions in translation and two tables summarizing imperial epithets and monuments.

Takashi Fujii is influenced mainly by the approach of Simon Price (Rituals and Power, Cambridge 1984) and so he regards with reason the imperial cult as an amalgam of religion and politics or, better, as a ritual reinterpretation of Roman power in Greek terms in the context of the creation and maintenance of Cyprus as a province. This model undoubtedly serves various ends. It helps the author to contextualize the status of the emperor within the local religious and cultural context, to systematise the integration of the imperial cult in the island's civic and sacred landscape, to analyse the role of the notables as a determining factor in the performance of rituals and to trace the complex paths whereby communication occurred between the Roman ruler and his subjects.

Yet, at the same time, this method, inspired mostly by the situation in Asia Minor, prevents Takashi Fujii from discerning the true differences and particularities that chiefly arise from the Cypriot historical and cultural background, although the author announces in his introduction that his approach involves great emphasis on local factors. Thus the interesting statement that "the Cypriots worshipped the emperors, in most cases, not because they offered practical benefactions to the island, but because they were the very rulers of the Empire" (103-104, 157), requires careful scrutiny on the part of the reader, not so much in connection with a general do ut des system of relationships, as in regard to the Hellenistic history of Cyprus and the cult of the Ptolemies. The establishment of Cyprus as a province, in contrast to the creation of provinces such as Macedonia, Asia, Syria or Egypt, arose from the integration into the Roman Empire of a Ptolemaic oversees possession, rather than an Hellenistic kingdom itself. This decision of Augustus was consonant with the insular geography of the province and revived, to some extent, the administrative independence of Cyprus on Classical models. This is an important fact for the understanding of political and cultural continuities and discontinuities in Cyprus from a longue dur&#233e</i> point of view. Thus, a more thorough examination of the previous Ptolemaic period would have thrown light on several aspects of the imperial cult and would have provided the author with better methodological tools to analyse what he simply, albeit correctly, affirms. The involvement of Roman magistrates in the worship of the emperor would probably have recalled the highly centralized Ptolemaic cult and control over the island and echoes the difficulties that the Cypriots would have had to deal with in passing from a state-organised royal cult to a more "spontaneous" civic imperial cult.</p> <p>In his search for examples to justify all the "three levels of the imperial cult in Cyprus, i.e. the provincial, civic and individual" (104), Takashi Fujii is of the view that the cult of Tiberius in the gymnasium at Lapethos, which involved a temple and a cult statue of the emperor and was introduced by the gymnasiarch Adrastos on the occasion of the imperial anniversary of 15 CE (28-29) was an individual or familial cult: "Tiberius was a deity whom Adrastos individually worshipped as his own god inside the <i>gymnasion</i> of the city" (28, see also 68-69, 108). Here the author seems to misunderstand both the notion of the Greek gymnasium as an institution and as a public place or the "second agora" of the city. In any case, hereditary priesthoods did not indicate any familial character of the cult in question. It is not clear what the author means by the sentence "inheritance of the imperial priesthood took place not only at the provincial and civic level, but also at the individual level" (120). Such hereditary priesthoods simply stress the eminence and wealth of local families whose members could afford the expense of conducting rituals over many generations. Certainly, like many loyal provincials, Adrastos, who expressed his complete devotion to the emperor by calling him his own god, might eventually have worshipped Tiberius privately at home. However, the cult which this citizen of Lapethos, in his capacity as gymnasiarch and priest of the gods of the gymnasium, introduced to the gymnasium of the city cannot in any case be regarded as "a cult foundation for the emperor at the individual level" (28).</p> <p>Takashi Fujii spends much time on examining epigraphic texts in a purely grammatical sense (i.e. votive formulas in the nominative or dative case) and trying to discern differences between the titles <i>theos</i> and <i>divus</i>, or the exact meaning of the terms <i>agalma</i>, <i>andrias</i> and <i>eikon</i>, although previous studies have shown that any such attempt to reach generally accepted conclusions is rather fruitless. It would have been better, perhaps, had the author attempted an analysis of various matters in the current Cypriot bibliography that have hardly been explored. Such matters include specific priesthoods, like that of <i>politikos archiereus</i>, which may point towards a Ptolemaic background, and that of <i>archiereus</i> of the safety of the imperial house, a post which probably involved the celebration of a particular event, the numismatic iconography, especially of Severan coins, which would provide useful information on imperial politics and ideology, or the intriguing dedication to Zeus <i>Kapitolios</i> of the restored theatre at Paphos, which was a Greek city, under the Antonines, thereby possibly challenging Angelos Chaniotis' model of the dissemination of cults and the transfer of rituals.</p> <p>Anyway, Takashi Fujii gives us two thorough studies on imperial statues and imperial festivals, and carefully investigates the involvement of the local notables in the formation of imperial rituals. He examines in exemplary fashion the oath of allegiance to Tiberius and the Amathusian inscriptions attesting the cohabitation of Aphrodite <i>Kypria</i> and Titus in a common sanctuary, and provides possibly the most comprehensive study ever carried out on Cypriot calendars.</p> <p>Takashi Fujii's book on the imperial cult and imperial representation in Cyprus, although it contains some weak points and misinterpretations, is undoubtedly an important, original and valuable synthesis on matters in Roman Cyprus.</p> <p class="italic" style="text-align: right">Maria Kantirea</p> </div> </div> </div> <div id="page_footer"> <div class="ie6_font_size" id="separator"></div> <p>issn 1618-6168 / www.sehepunkte.de <img height="10" src="/images/sp10.jpg" width="10"> </p> </div> </div> </body> </html>