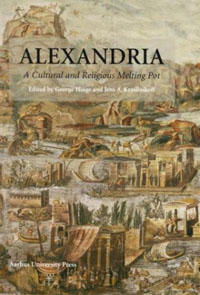 In spite of the chronological and cultural gap that separates us from the Ptolemies and the Roman Empire, in recent decades Hellenistic and Roman Alexandria has somehow become - in academic research as well as in entertainment [1] - a mirror for Western civilization struggling to adjust the definition of its own identity when confronted with issues of multiculturalism, ethnicity and the nature of political power. The history of Alexandria may seem a chronicle of success, but the picture is actually more complex and less idyllic than often thought. Notwithstanding the growing number of volumes already published on the subject, there is still space for further debate and many topics are far from being completely exhausted. This slim volume presents a revised and expanded version of eight papers delivered at an interdisciplinary conference held at the University of Aarhus in 2004; it has been carefully produced (there are only a few misprints, e.g. (16) "decree" for "degree"; (41) and passim "Sorvignou-Inwood" for "Sorvinou-Inwood"), with some b/w figures of maps and archaeological remains when needed.

After an Introduction by George Hinge and Jens A. Kraskolnikoff, the volume is divided into two chronological sections, each with four contributions: 1. 'Alexandria from Greece and Egypt' and 2. 'Rome, Judaism and Christianity'. The first chapter, by Kraskolnikoff, investigates the processes by which Alexandria under the first Ptolemies came to define itself as a place (versus 'space'), employing the most recent research in anthropological geography and modern theories on identity groups in relationship to landscapes. Marjorie S. Venit in the second chapter summarises the results of her fascinating study of visual bilingualism in the monumental tombs of Alexandria (now published as a monograph: The Monumental Tombs of Ancient Alexandria: The Theater of the Dead, New York-Cambridge 2001); the mixing of different cultural elements in Alexandrian funerary architecture and the adoption of Egyptian eschatological symbols by Greek citizens may be fruitfully compared with the recently published texts on the afterlife from Graeco-Roman Egypt (Mark Smith, Traversing Eternity: Texts for the Afterlife from Ptolemaic and Roman Egypt, Oxford 2009).

The cultural exchanges taking place in the visual arts and in the religious imagery were not necessarily paralleled by the same phenomenon at the highest level of Greek scholarship: contrary to a recent trend to hypothesise an Alexandrian Library packed with texts in every known language, Minna Skafte Jensen argues strongly that we do not have enough evidence for multi-language book collection and that Alexandrian scholars were always concerned mainly with Greek literature and culture. [2] Jensen's chapter, however, is mainly focused on delivering a clear and concise survey of the complex subject of Homeric scholarship in Alexandria.

Hinge, an expert on Greek literary dialects since his doctoral thesis (Die Sprache Alkmans: Textgeschichte und Sprachgeschichte, Wiesbaden 2006), analyses the peculiar koine language spoken in Alexandria as an element of the new Hellenistic 'Hellenicity'. The starting-point is Theocritus' Idyll 15; after a section on the debate on the nature of the Doric used in this poem (Hinge's sensible conclusion is that it is an artificial language, which cannot be completely identified with the Cyrenaean Doric spoken by a section of the Alexandrian population [Ruijgh], or with the Syracusan Doric [Magnien; Molinos Tejada]), the Idyll is used as evidence for the linguistic prejudices active in Ptolemaic and later Roman Egypt. His conclusion is relevant for both philologists and historians: "The disappearance of spoken epichoric dialects coincides with a growing interest in the literature transmitted in those dialects [...] and the construction of a new literary pseudo-colloquial Doric dialect". Fundamental on the peculiarity of Alexandrian Greek is the short but very dense study by Jean-Luc Fournet [3], which should be added to Hinge's bibliography. More data on the ethnic composition of Alexandria - and therefore on the variety of language and dialects spoken there - are and will be provided by recent research on census and tax documents in Demotic and Greek, such as the works by Willy Clarysse and Csaba La'da. [4] The second section of the book concentrates on the multifarious facets of Jewish and Christian culture in Alexandria. Per Bilde presents the Alexandrian-born Jewish writer Philo as a polemicist and a political apologist, analysing in depth his works Against Flaccus and The Embassy to Gaius, setting them in their historical context, and arguing that they can be understood as having both a political-apologetic and a theological-apologetic character. Anders Klostergaard Petersen, facing the challenge of 'making history' and recreating an entire culture on the basis of limited sources [5] offers a long and highly theoretical study of the problem of cultural categorisation in ancient and modern historical works, taking as a case-study the so-called 'Alexandrian Judaism'. Samuel Rubenson follows the evolution of Christianity in Alexandria through different phases, not in terms of doctrinal 'normalization' (Bauer: from Gnostic heterodoxy to Ecclesial orthodoxy), but from the perspective of its social development from a lively philosophical school to the establishment of the Patriarchate, a communal institution and a new power challenging the religious and secular authority of the Roman Empire. Finally, Troels Myrup Kristensen investigates, using literary and archaeological sources, the very broad range of attitudes of Alexandrian Christians to pagan statues in the fourth and fifth centuries (and especially the closing of the Serapeum in AD 392): the potentially demonic power of pagan artifacts could be 'neutralised' or exorcised with destruction, reuse, mockery or even by simply carving crosses on them. Curiously, the murder of Hypatia as related by our sources apparently followed a pattern similar to that of the destruction of statues (disarticulation, burning: (165)).

The idea of Alexandria as a 'melting pot' is not completely supported by all the contributions of this volume: it appears that, in spite of periods of peaceful exchange or ferocious clashes, the individual cultures present in the city have grown with a certain degree of independence, or even separation the ones from the others. As is to be expected from a book arising from a conference, the chapters vary in subject, length and originality, and the value of the book is rather in its capacity to challenge and stimulate the curiosity and interest of the reader rather than to offer a complete survey of specific issues; the task in this case has been successfully accomplished.

[1] See, e.g., the thought-provoking book by Susan A. Stephens: Seeing Double. Intercultural Poetics in Ptolemaic Alexandria, Berkeley-Los Angeles-London 2002. A recent film focused on Hypatia's Alexandria (Agora, by Alejandro Aménabar, 2009) is at the center of a heated debate for its treatment of religious and cultural themes.