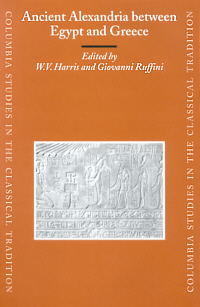 Since the birth of papyrology, poetry composed in ancient Alexandria has never actually been "out of fashion" among scholars of Greek literature, and the latest finds, such as the Milan papyrus with epigrams attributed to Posidippus, have just kept the flame of their enthusiasm alive. As for the physical aspect of the city that gave so much to the arts, sciences and philosophy in the Hellenistic period and Late Antiquity, many steps forward have been taken since the massive summa produced by P.M. Fraser in 1972. Only in the last few years, however, after the publication and digesting of the results of the latest archaeological campaigns (most of them underwater) in the area of Alexandria, has the debate on the topographical and architectural features of the city been reopened. Only lately, moreover, have the archaeological finds been able to be put in a wider and more complete context thanks to the development of Demotic papyrology and of studies of ethnicity, which have led to a deeper knowledge of the "Egyptian side" of the Ptolemaic coin. As a result, during the last decade the capital of the Ptolemies has been the focus of many volumes: archaeological monographs, collections of studies, catalogues of exhibitions, and illustrated books for the general public.

The book edited by Harris and Ruffini includes twelve of the papers presented at a conference organized by the Center for the Ancient Mediterranean at Columbia University in October 2002, plus an article by Susan Stephens, while the contributions originally written for the conference by Peter Bing, Dorothy Thompson, Paolo Gallo and Jean-Yves Empereur are not appearing in this volume. Although many of the contributors actually came from the Eastern Atlantic seaboard, one of the organizers' wishes, as explicitly stated by W.V. Harris, was to provide US scholars with an occasion for discussion on Alexandria at a time when this was a neglected topic in America; the only US symposium to have been held on this subject was that held at the Getty Museum in 1993, Alexandria and Alexandrinism, while all the major exhibitions and conferences on this topic have been organized in Europe. [1] The hope of the convenors was to lay a first stone on "the construction of a mature and multi-faceted urban history of the second-largest city of classical antiquity" (vii), the first being of course Rome.

The Columbia event brought together young and promising contributors (like Capponi, Ruffini) and established scholars. Variatio is in fact one of the main characteristics of the volume: the papers range through a series of disciplines (such as sociology, papyrology, archaeology, Greek literature, art history, economic history); some of them are very broad overviews, others more narrowly focused; some present the results of a lifetime study, others, when first presented in 2002, were meant to be reports on work-in-progress; some are more traditional in their presentation, others more experimental. However, at least two fils rouges linking many of the papers can be spotted: one is the issue of ethnic identity, the other is relations and networks - between social, cultural and / or ethnic groups (here the Greek-Macedonians, the Egyptians and the Jews).

The first, engaging and stimulating paper, by Walter Scheidel, is devoted to ancient Alexandria's demographic growth, framing it in a global and historical context. The ancient literary sources either lacking or being inaccurate, the author tries to infer the mechanism of the city's development through a comparative analysis of other examples of pre-modern metropolitan urban growth (especially Japanese and European capitals, but also other Hellenistic cities like Antioch), and building on archaeological evidence. Even though some of the results may remain speculative, this contribution is a valuable example of methodological rigour and broad-mindedness required of the ancient historian. Another contribution also related to the shape and topography of ancient Alexandria is that by Mostafa El-Abbadi, presenting a study of Greek historical knowledge, and mythical transfiguration, of a main strategic point of Alexandria, the island of Pharos.

Two papers focus on art and artefacts: Nicola Bonacasa, following the then pioneering views of A. Adriani, underlines the originality and peculiarity of Alexandrian art in the context of Hellenistic art, recognizing it mainly in two features, realism and eclecticism. Mona Haggag discusses Egyptian popular magic in Late Antiquity through the evidence of wax figurines (only loosely related to the Alexandrian context, since they were found in Upper Egypt).

Two contributions deal with the topic of ethnic self-presentation. John Baines, using mainly archaeological evidence, gives a detailed survey of the self-portrayal of Egyptian élites in Alexandria under Ptolemaic rule: while Hellenistic poetry tended to avoid or disguise elements of Egyptian culture, Baines confirms an opposite trend in the visual arts which has already been noticed, pointing out that Hellenistic monuments and portraits tend to adopt Egyptian features, but the reverse rarely happens (cf., on the opposite, Ghandara art in Hellenistic India). In a massive article Ellen Birnbaum, building mainly on textual evidence (the Letter of Aristeas, the Wisdom of Salomon, the works of Philo), discusses how Alexandrian Jews perceived themselves in relationship with 'the other'.

Fabienne Burkhalter and Livia Capponi concentrate on administrative history: the first tries to define the functions and the location of the offices of the Alexandrian hierothytai, Greek magistrates attested only in the Augustan era, but possibly of Ptolemaic creation. The latter, who in the meantime has published her PhD dissertation on the administrative history of Roman Egypt (Augustan Egypt: The Creation of a Roman Province, London / New York 2005), explores the meaning of a possibly Augustan, possibly Caesarian innovation in the land administration, the oikos (land owned by Alexandrian citizens or institutions in other regions of Egypt), building mainly on papyrological evidence.

Mohammed Abd-el-Ghani and Giovanni Ruffini work on networks, although from different points of view and with different methodologies: the first examines the social and economic contacts, mainly in the first two centuries of the Roman rule, between Alexandria ad Aegyptum and Middle Egypt, from where comes the bulk of the extant papyri (Oxyrhynchite, Arsinoite, Hermopolite). Ruffini offers a brilliant sample of how the "social network analysis" theoretical model can be fruitfully applied to ancient history, exploring how many "degrees of separation" ran between Late Antique pagan élite representatives scattered through the Mediterranean world, and discovering that a privileged channel of relationship linked Egyptian and Athenian intellectuals.

Since many scholarly and popular works focused on the Alexandrian Library have been published in the last decade, preceding and following the opening of the grand New Library in Alexandria, the topic is (wisely) not specifically addressed in this volume. However, two interesting papers concentrate on Greek literature as a tool for understanding Greek society and culture within Egypt. One discusses the epigrams of the P.Mil.Vogl. VIII 309, attributed to Posidippus of Pella, on which a number of relevant studies has been produced since its first complete publication in 2001 [2]: Susan Stephens, who features prominently also in two recent collection of essays on Posidippus, "Labored in Papyrus Leaves" (2004) and "The New Posidippus, a Hellenistic Poetry Book" (2005), focuses on the ethnicity issue in his epigrams (especially in the Hippika section), demonstrating that the Ptolemies are celebrated by the Macedonian epigrammatist as a true Greek-Macedonian dynasty. Heinrich von Staden offers a vivid and in-depth insight into Galen's view on Alexandria (including touches of ethnic folklore), from idealization to disappointment.

As a complement to the articles, this carefully produced book includes 30 b&w plates, three maps and two tables with graphics. The bibliography is rich and generally up-to-date - as much as is possible in so fast-developing a field. Although there is a subject-index and an index of papyri, an index of the ancient sources would also have been useful since some of the papers are founded on textual evidence. Although discussion of some of the themes treated is likely to have been advanced since the time of the conference, the book is stimulating and valuable for its variety and scope, and will appeal to specialists of various disciplines: historians, papyrologists, archaeologists and scholars of Hellenistic literature.

[1] Several studies of the new topographical assessments of the city and of the underwater excavations have been published, either in scholarly or popular form, mainly by French authors (Empereur, Bernand, Goddio). European contributions to the ancient history of Alexandria have been numerous and more are destined for the near future (for updates see, among others, the bibliography and the websites listed in the page Alexandria Docta, in the CEDOPAL site, URL: http://www.ulg.ac.be/facphl/services/cedopal/pages/ bibliographies/ALEXDOCT.htm). Some volumes, like G.L. Steen (ed.): Alexandria, the Site and the History, New York-London 1993, include many Egyptian contributors as well.