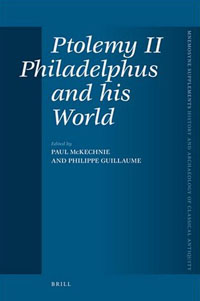 The volume under review originates from an interdisciplinary conference on Ptolemy II Philadelphus held in Auckland, New Zealand, in July 2005. The purpose of this conference was a re-evaluation of the historical significance and of the personality of Ptolemy II, whom W.W. Tarn (Antigonos Gonatas, 1913) once disparagingly described as a weak and "sickly creature", more inclined to pleasures than to war. His second wife and sister, Arsinoe II, depicted by many modern scholars as his perfect half - a cunning and power-thirsty virago -, underwent a revisionistic assessment already in the 1980s, thanks to works like S.M. Burstein, Arsinoe II Philadelphos: A Revisionist View, in Philip II, Alexander the Great and the Macedonian Heritage, eds. W.L. Adams, E.N. Borza, Washington 1982, 197-212. Even without taking at face-value encomiastic praise of Ptolemy II such as Theocritus, Idyll XVII or Callimachus, Hymn to Delos, a more balanced picture of the second Lagid king was a long-due task for ancient historians.

Making the most of the available literary, epigraphic, papyrological and archaeological evidence, the contributors offer an updated and original perspective on many aspects of Ptolemy's reign: economic reforms, diplomatic and military initiatives, intercultural relationships, religious and philosophical traditions. Since already dozens of thorough and engaging studies (starting from Fraser's Ptolemaic Alexandria) have been devoted to Alexandrian philology, poetry and literature in Greek - fields where Philadelphus' reign reached the excellence -, it has been a wise choice not to include a specific chapter on this topic, leaving more space to less known aspects of Hellenistic Egypt.

After an introduction by Paul McKechnie, Oswyn Murray gives a sample of his and Graham Zanker's forthcoming translation and commentary of this work. He thoroughly analyses Christian Gottlob Heyne's prolusio at the University of Göttingen, De Genio Saeculi Ptolemaeorum, which inaugurated not only the academic year 1763, but also an era of new awareness of the Ptolemaic cultural policy and of its relevance for the modern Western world.

Paying homage to the residence of the Ptolemaic rulers, the main sections of the volume are named after the five regions of Alexandria. In Beta (the region where the royal palace stood), two relevant contributions are given by Dorothy Thompson and Céline Marquaille. Thompson, building on her impressive work Counting the People in Hellenistic Egypt (with Willy Clarysse), provides an accurate picture of the economic reforms which took place in the 260s-250s (new beginning of the fiscal year; introduction of the salt-tax and of the apomoira). The excellent chapter by Marquaille on the foreign policy of Ptolemy II, focusing on Cyprus and on the Red Sea, wets our appetite for her forthcoming monograph on the same topic. Also in section Beta, a careful reassessment of much debated topics is provided by James O'Neil (the chronology of the Chremonidean war, with a discussion of the Athenian archon-list) and Geoff Adams (the ambiguous relationship between the Ptolemaic court and Pyrrus). Matthew Trundle's analysis of OGIS I 266, an inscription documenting the relationship between Eumenes I and his garrisons at Philetereia and Attaleia, technically would be more in place in a volume on the Attalids, but provides nonetheless a valuable comparative background to study the role of Ptolemy II as a paymaster of mercenaries (Theocr. Idyll 14.58-59). [1]

The Gamma sections is devoted to regional studies. The works adhering more closely to the purpose of this area are Stanley Burstein's compelling overview of the military and cultural expansion into Nubia, the "hunting reserve" for Ptolemy's powerful war tanks, the elephants; Amos Kloner's surprising portrait of the cross-cultural habits of the Idumeans of Maresha, using Ptolemaic coins, borrowing Greek architectural and artistic elements, writing both in Aramaic and in Greek; and Erja Salmenkivi's survey on Herakleopolis Magna, capital of the omonym nome, Egyptian town with a relevant number of military settlers. Martin Bernal presents a much broader scope in his combative essay on the Egyptian/Semitic origins of the Eleusinian mysteries, a cult which developed in Classical Athens but had a wide and enthusiastic following in Hellenistic Alexandria. His analysis, mostly based on ancient sources (some very late, like Plutarch or Clement) and etymology, may not fully convince, but certainly offers a healthy reminder of the frequent and profitable contacts between Greeks and Eastern Mediterranean civilizations. [2] Anatole Mori, who, in the meantime, has published her monograph The Politics of Apollonius Rhodius' Argonautica (Cambridge 2008), depicts the image of Ptolemy II as a well-balanced and pious diplomat through the lens of the poeta doctus Apollonius, head of the Library and affiliated to the court.

Delta is the section inspired by the Jewish neighbourhood of Alexandria and its vivacious literary culture. Research on Jewish civilization in the Hellenistic period, in particular the relationship between the Alexandrian Jewish community and their rulers, has been enjoying much attention in the last decades, see e.g. Jewish perspective on Hellenistic Rulers, eds. T. Rajak, S. Pearce, J. Aitken, J. Dines (Berkeley-Los Angeles-London 2007). With the contributors assuming, according to the Letter of Aristea, that the Greek translation of the Hebrew Bible took place entirely under Philadelphus, this section includes three long Septuaginta studies: Johann Cook compares the Greek version of Proverbs, "Aristeas", and the later Jewish philosopher Aristobulus; Paul McKechnie suggests an original interpretation of Ptolemy II as "New Moses"; Philippe Guillaume analyses the chronographic organization of the "Former Prophets" books in Alexandria. William Loader and Elaine Wainwright deal with more specific philological questions (Greek translations of Genesis 1-3 - influenced by Plato, Timaeus - and Sirach 38:1-15, probably written in the second century BC) in order to compare Biblical and Hellenistic interpretation of cosmology and of gender/sexuality.

The Epsilon section focuses on Egyptian culture and literature. Developing previous research (by R. Merkelbach, L. Koenen, P. Bing, D. Selden and many others), recent works like Susan Stephens' Seeing Double. Intercultural Poetics in Ptolemaic Alexandria (Berkeley 2002), have drawn attention to the possibility of osmosis between otherwise apparently separated cultures. The massive contribution (50 pages) by Steve Winson offers a fascinating narratological insight into the world of the Egyptian "novel" (First Tale of Setne Khaemwas), assessing the role of the female narrator. There are comparisons with Isis aretalogies in Greek and the Latin Golden Ass, but a closer and more in-depth comparison with the Greek novel than presented on pages 348-349 would have added completeness to an otherwise very valuable study. A fresh re-investigation along with balanced judgements on long-debated cultural problems is also proposed in this section. Kostas Buraselis writes on Ptolemaic sibling marriage, a choice inspired - other than by raison d'état - more by Egyptian religion than by a regular pharaonic practice. Daniel Ogden evaluates the role of royal courtesans as a part of the "sister-marriage project", starting from Bilistiche and other real or supposed Philadelphus' lovers (he was allegedly "prone to eros", Theocr. Id. 14.61). Stefan Pfeiffer defines the link between the cult of Serapis and the Ptolemaic court, focusing on documents from the Zenon archive. While Ptolemaic royal decrees would always be written both in the Egyptian and in the Greek version, it is peculiar to find under Philadelphus important royal decrees only in the hieroglyphic form: Joachim Quack provides a detailed analysis of some of these, like the Mendes and the Pithom stelae, comparing them with ancient pharaonic documents.

Some minor flaws exist in this otherwise beautifully produced volume. Though contributing to a common project, articles are conceived as self-standing unities, with the result that one sometimes feels the need for cross-references between different contributions touching similar points; e.g. O'Neil p. 67, Marquaille p. 46 and Ogden p. 379 (Ptolemy of Telmessos), or Ogden pp. 379ff. and Buraselis' chapter (sibling marriage). Only few points require correction, e.g. p. 94 note 37 (actually Callimachus in Hymn to Delos does not state that Ptolemy in person led his troops against the Gauls); p. 355, "Berenice" (I) is of course mother of "Philadelphus and Arsinoe II", not of "Soter and Arsinoe II"; and p. 373 read "reign" instead of "rein".

It would have been impossible to produce a comprehensive work including every aspects of Ptolemy's complex politics and personality. The editors rightly chose to turn their attention to the East and to the Aegean. Nevertheless, the volume would have benefited from chapters on the newly developing relationship between Rome and the Lagids (nothing new has appeared since A. Lampela, Rome and the Ptolemies of Egypt. The development of their political relations 273-80 B.C. Helsinki 1998?), and on the political and economic ties with Cyrene and the Western Mediterranean. Although non-English passages are fully translated, some chapters, concentrating on specific philological and linguistic matters, require the knowledge of Greek, Egyptian and Hebrew to be fully appreciated, yet their conclusions are worth considering also for the general cultivated reader. This rich and thought-provoking miscellenea, created with the concourse of valuable scholars, is an excellent and stimulating work, and can be seen as a starting point for further research on this topic. It is warmly recommended to ancient historians in general and to every scholar dealing with Hellenistic, Jewish and Egyptian cultures.

[1] This field will be explored in greater depth by Christelle Fischer's forthcoming study on Ptolemaic army and society (Stanford, CA).

[2] R. Drew Griffith: Mummy Wheat: Egyptian Influence on the Homeric View of the Afterlife and the Eleusinian Mysteries (Lanham 2008) has recently devoted his attention to this topic.