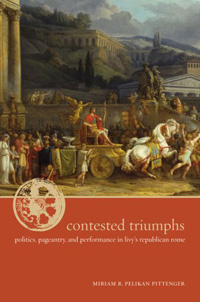 Spectacles held in the streets of Rome have lately formed a topic in vogue among classical scholars, as have aristocratic self-promotion and rivalry within the Republican political system. Few have, however, taken the discussion into the Senate and analysed debates staged on that very floor in terms of performance. In this aspect, as in others, Miriam Pelikan Pittenger's book on triumphal debates, Contested triumphs. Politics, pageantry, and performance in Livy's Republican Rome, in refreshingly new.

Pelikan Pittenger starts off with a central observation: In order to gain the most prestigious prize, a triumphus, the Roman noble had to win two fights, first the military struggle on the battle-field, later the verbal combat in front of the peers in the Senate. Her study focuses on the second of the two; the Roman general's post-war strive for recognition and its senatorial response. The aim is to reveal functions and meanings of the triumphal debates in their contemporary political culture as in their later representation.

As suggested by the title, Livy takes a prominent place in the study, not only as our main source of the Republican events, but also as a text analysed in its own right. Instead of choosing a traditional single perspective, either the historical or the literary, Pelikan Pittenger deliberately sets out to analyse them both, side by side. This is a bold and rewarding approach that allows her to discuss the debates in their full context of Roman politics, memory and representation. Also, the method provides a way to tackle the troublesome issue of inaccuracies in Livy's speeches. By allowing the Ab Urbe Condita to be both a source and a text, the question of historical correctness becomes less relevant. With her approach, Pelikan Pittenger can rightfully claim that even if the Livian testimony should not be taken verbatim, it nevertheless gives us relevant insights into both possible scenarios of Republican politics and to visions of the past as expressed in the Augustan age. The author also does well to remind us throughout the book that Livy and his contemporaries saw Republican politics in retrospect, knowing all too well the weaknesses of a system that balanced between encouraging individual accomplishments and protecting collective aristocratic values.

The study is divided in two principal analytic parts. The first deals with the criteria used to grant triumphs and with the outcomes of the debates. The second part centres on the drama of the debates with a special eye on the symbolic capital to be gained from the process. Hereafter, a concluding chapter discusses the ritual and symbolism of the triumphal procession itself. Two appendices follow, one that lists passages in Livy that describe Roman generals' homecomings and triumph requests, another that offers a short discussion of success rates in these requests. Finally there is a bibliography, followed by an index locorum, an index to Republican triumphs as they appear in the edition of Degrassi's Fasti Triumphales and a general index.

The great merit of the first part of Pelikan Pittenger's book ("Setting standards") is that it clearly demonstrates what has been suspected for some time now, namely that there were no precise rules in the granting and refusal of triumph requests. The elaborated attempts of Imperial ancient authors as well as Mommsen and his 20th century followers to reconstruct well defined and systematically employed legal criteria (such as the 5,000 enemies killed) could thus be rejected. This does not imply that there were no principles at all. By way of a balanced and well-founded analysis, Pelikan Pittenger is able to expose a rhetorical procedure that was always fed by precedence and mos maiorum. The author takes as the central formula Livy's imperio auspicio ductu felicitate, which quite clearly offered four key concepts to both sides in the debates. To achieve a triumph, the general of the late second and early first century BC was supposed to have conducted his campaign successfully under his own command and with the gods on his side. That said, the flexibility of the terminology made room for a large variance in how demands, discussions and outcomes were presented and obtained. Among several interesting points, one might note that felicitas mattered in more than one sense. Winning was not everything, and too many lost Roman lives hindered even victorious generals from achieving the honour desired.

The second part ("The performance of politics and the politics of performance") stands out as the most important in the book. Here, the outcome of each debate is less relevant than the process itself. From a number of specific cases, Pelikan Pittenger is able to expose how the Senate floor offered a scene to stage character, morals, abilities and willingness to serve the state for all the actors involved, the general, the other speakers and the audience. Hence, even if, for example, L. Furius Purpureo and L. Aemilius Paullus did not manage to stop Cn. Manlius Vulso from gaining a triumph, their intervention should not be viewed as a failure. Rather, through their appearance, by what they said and how they said it, they managed to gain symbolic capital for themselves and their families. They were also able to strengthen their prospects to win new elections and appointments (which in their turn generated yet further possibilities for even more honours).

The concluding chapter ("Triumphs and Roman values") is the least successful in the book. In contrast to the earlier discussions that are based on Pelikan Pittenger's own questions to and analyses of the sources, the final chapter is basically a summary of what other scholars now say about the procession as religious and political performance. One suspects a will to reflect the Roman process (from debate to triumph) and hence to balance the politics and performance with pageantry, as stated in the alliterated title. However, pageantry offers very little answers to the highly relevant questions that Pelikan Pittenger asks, and the book would have benefitted from a different ending.

Pelikan Pittenger's book on triumphal debates as staged in the Republican Senate and in the writings of Livy is a detailed and solid work that by way of a fresh approach provides valuable and stimulating insights into the dynamics of Roman politics and performance.