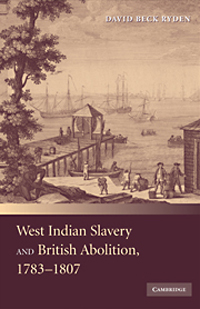 Explaining the British decision to abolish the slave trade in 1806/7 has never been easy. If moral arguments were at the core of the decision, why did they take so long to resonate with parliament and the public? If economic developments lowered the barriers to political change by making slavery less profitable, why did abolition come about at the peak of the slave trade, at a time when slavery remained a highly lucrative way of labour exploitation in the Americas? Over the years, historians have put forward a number of explanations ranging from the highly idealistic to the largely cynical. What has made it so difficult to decide which of the complex explanations that have characterised the debate in recent decades is most plausible is that hardly any facet of the picture - aside from the brutal exploitation of plantation labour and the horrors of the middle passage - is one on which scholars interested in the subject agree. Whether slave labour had a major impact on British industrial development or was a marginal phenomenon as far as trade and productivity were concerned is as controversial as the state of sugar production in the British Empire around 1800. Why the idealists took so long to make their case convincing is as puzzling as the impact of societal changes and the debate on labour relations in Britain in an era of rapid or slow industrialization is on the British public's evolving views on slavery. Did Manchester spinners and weavers really fear that they would be enslaved in the medium term unless a stop was put to the odious trade? Or did the coming of industrial capitalism make them more open to evangelical beliefs, which increased their horror at the practices of slavery?

The debate has been going on for so long that it is unlikely that one new book will put an end to it, but David Beck Ryden's original approach certainly adds a welcome new facet. Ryden's research, which took him to a substantial number of manuscript collections dispersed across British and American archives, focuses on the activities of the advocates of slavery, notably the key lobbying group of Caribbean sugar producers, the "London Society of West Indian Planters and Merchants". He has painstakingly reconstructed attendance records of meetings, debates on anti-slavery agitation and government policy in these circles, as well as members' economic fortunes. His monograph integrates this new evidence into the broader story of sugar production and slavery to produce a compelling analysis which provides new evidence for the cynics' case that something must have happened which made it easier to abolish the slave trade around 1807. If it was not the general inefficiency of the plantation economy (though British sugar planters had depended on high tariffs against cheaper French and East Indian sugar throughout the eighteenth century), then what was it?

Ryden offers a carefully balanced and nuanced overview of the sugar trade, the Society's activities, and the general history of Caribbean slavery in order to set the stage for his conclusion. He argues that the planters' organisation, dominated by Jamaican plantation owners resident in London, faced a political problem. Planters caused high government expenditures and burdened consumers with a higher price for sugar than in France; the benefits of these socialised costs were shared, however by a limited number of extremely wealthy plantation owners. For some time, Jamaican lobbyists were able to rebuff complaints through a number of - more or less persuasive - arguments. They highlighted the contribution they made to the treasury, they emphasised the 'morality' of their business practices, and they tried to hide the realities of slavery from public view. Admittedly, East Indian sugar was produced by free labour (and tended to be cheaper, supporting the argument that free labour was more productive), but the East India Company benefited from a monopoly - something the Caribbean planters did not demand - and contributed less to the British treasury, because on balance its activities transferred bullion from Europe to Asia. Indeed, Pitt's wartime budgets at times planned to meet 40 percent of expenses from duties on the Caribbean trade. Moreover, planter lobbyists emphasised that profits from Caribbean plantations were spent in Britain, where planters sent their families, where they purchased their finished goods and where they moved as soon as they could afford it. Britons thus enjoyed the benefits of slavery, which was not as bad, planters argued, as opponents tried to make it. Such arguments convinced at least a majority of the Lords to reject bills proposing to outlaw the slave trade.

What changed in 1806 was not only that abolitionist tracts had informed greater parts of the population about the realities of life in Caribbean, but also that the price of sugar dropped precipitously. The reason for this was overproduction in Caribbean markets, and the London Society demanded subsidies in response. This demand - and the background to it - became widely known through a number of parliamentary enquiries and debates.

Poor economic decision-making on the part of Caribbean planters appeared to demonstrate that they way they had organised production and marketing no longer coincided with Britain's national goals. Planter incompetence reduced their contribution to national wealth, and slavery appeared to be at the root of the problem, because it created the wrong incentives. Planters focused on increasing the labour force, and thus drove up production at the wrong time, rather than concentrate on income and profits. If planters could not see this, then the government would have to cut off their supply of cheap labour by legislative means. This line of argument, prominent in Lord Grenville's speech in support of abolition, apparently convinced a sufficient number of peers to change their mind and to agree to the 1807 abolition bill.

David Beck Ryden has thus succeeded in strengthening the case for the impact of economic developments on abolition by drawing attention to the impact of short-term shifts in market conditions on the plausibility of political arguments and on voting behaviour in parliament - in addition to writing the history of a previously little-known lobbying group and the political economy of the sugar trade in late eighteenth-century Britain. His case, though based heavily on reading between the lines of official speeches, is plausible, though the economic argument for abolition played little role in Commons' debates. He has certainly succeeded in adding a new aspect to the broader debate on the relationship between capitalism, the British state and the transatlantic slave system.