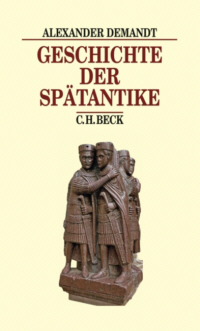 This book is a version of the 2007 second edition of Demandt's 1989 Handbuch der Altertumswissenschaft volume on Die Spätantike, abbreviated slightly by the removal of all footnotes. Even so, it still occupies over 600 pages, far too bulky to fit into any normal pocket. One must ask what is the point of this particular project, of both the 2007 edition and this reduced version.

First the republication, since, although there are some changes in the 2007 Handbuch, it is rather generous to call it a proper second edition. The original Handbuch was a traditional survey of the Late Antique world in the mould of A.H.M. Jones' Later Roman Empire, with a combination of narrative chapters followed by thematic investigations, though it lacked the comprehensive infrastructure which Jones' very detailed notes had provided. However, being published 25 years after Jones, its conservatism was more marked, especially in terms of the very limited incorporation of archaeological material and the restricted impact of the Peter Brown approach to the late antique world. Two decades further on it is surprising and disappointing that so little has changed. The Bibliography provides one simple yardstick: a large number of significant items, which ought to have affected the approach to the subject, are missing - Peter Brown Power and Persuasion (1992) or Poverty and Leadership (2002), Averil Cameron on Christianity and the Rhetoric of Empire (1991), Harries on Law and Empire (1999), Isaac on The Limits of Empire (1990), Matthews on The Roman Empire of Ammianus (1989), McLynn on Ambrose of Milan (1994), Millar on A Greek Roman Empire (2006). New questions have been asked about major sources such as Ammianus and Procopius, while our understanding of categories such as chronicles and ecclesiastical historiography have undergone profound reassessments. Some fairly recent items are included in the Bibliography, such as Meier on Justinian (2003 & 2004), but the up-dating is very patchy; it is also hard to see how such a fundamental publication as PLRE III (1992) has enriched the discussion in any way.

Law can serve as an illustration of the limitations which follow from this failure to consider recent trends in scholarship. The creation, dissemination and implementation of imperial law are, clearly, central to the effective operation of the empire in all significant spheres - economic, military, religious, social - and there is considerable evidence, in the imperial law codes and elsewhere, for the system at work. Whereas it was reasonable for Demandt, in his first edition, to take a fairly negative view of the efficacy of late Roman law, the works of Harries and Millar have challenged this assumption, so that legal texts preserved in the Theodosian and Justinianic Codes are seen much more as part of the negotiation over power between different interest groups, either within the imperial courts or between imperial centre and the provinces. Thanks to Millar in particular, we now have a much more subtle perception of how the system worked, with profound consequences for our understanding of the imperial office, court, and bureaucracy. All this is simply absent from the 2007 edition. The main recent work of English scholarship on late Roman law to be cited is John Matthew's excellent study of the Theodosian Code (2000), but this focuses on the creation and evolution of the Code as we have it and deliberately does not tackle broader aspects of the role of law in fifth-century society.

The traditional feel of Demandt's approach is enhanced by the process of abbreviation. Shorn of notes, the book now appears to present an uncontested and uncontestable view of Late Antiquity, whereas this is in fact a period about which there is significant debate and views are constantly evolving, whether these are on the vitality and diversity of the economy, the advance of Christianity, the survival of cities, or the composition and effectiveness of the armed forces. Many scholars, probably a clear majority, would now present the Late Antique world in significantly more positive terms than those adopted here. This does not deserve to be purchased: German readers would have been served much better by a translation of Stephen Mitchell's excellent A History of the Later Roman Empire 284-641. The Transformation of the Ancient World (Oxford 2006).