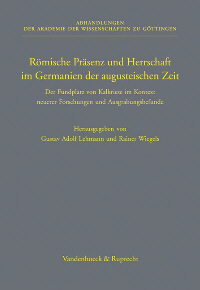 From 1989, one of the great riddles of Roman history appeared solved. Findings at Kalkriese, ca. 15 km north-east of Osnabrück, indicated heavy fighting involving a full Roman army ca. A.D. 9. Mommsen's 1885 hypothesis seemed confirmed: Kalkriese was the location of the clades Variana. Then, however, dissident voices were raised, creating a controversy of which this volume - the proceedings of an Osnabrück conference of 2004 - is the latest major expression.

Its twenty-one (unnumbered) chapters comprise four (unspecified) sections: 1. Kalkriese, the material evidence (archaeology, epigraphy, topography, ecology, 9-111); 2. Kalkriese, the numismatic debate (113-160); 3. Context (troop dispositions, associated sites, 161-336); 4. The Varus disaster (Germanic forces, sequence of events, main literary evidence, 337-449). This structure plunges readers into specialised discussion before establishing the wider historical and archaeological picture. It would have been helpful if Dreyer's synthesis (363-397), commissioned after the conference (8) for precisely this purpose, had been set at the start, to serve as an introduction and make unnecessary the frequent repetition of basic material that follows. A loose editorial rein is also suggested by the great variation in length between papers, the absence of a general map of the region before page 322, and the lack of an index.

Though many contributors appear to stand outside the debate, most, aware of its ramifications (see below), keep a close eye on it and some contribute materially to it. Both Wiegels (89-111) and García-Bellido (161-181) argue for the presence of significant contingents of troops of the Spanish garrison on the Rhine before Varus (though Wiegels also observes that if the strength of Varus' legions had been reduced through the dispersal of vexillations, total Roman losses may have been less than reported (99); cf. Wolters, 140 n. 19). Kemmers (183-199), from her analysis of coins from the Augustan legionary base at Nijmegen, proposes very early (pre-Lollius) military activity on the lower Rhine. Kühlborn (201-211) reports on recent excavations at Oberaden, Anreppen and Haltern. Interesting here, as at Waldgirmes, is how clearly the finds suggest initial Roman determination to stay east of the Rhine. Ebel-Zepezauer (213-224) notes an odd concentration of marching-camps by the Lippe. Heinrichs, in an excessively long paper (225-320), identifies a very early Roman artisanal quarter, closely associated with the military, in the early days of Cologne. Becker (321-330) and Rasbach (331-336) provide an update on the Augustan 'Stadtgründung' at Waldgirmes, with the latter noting the similarity of its coin-pattern to that of Kalkriese. Steuer (337-363) finds no reason to doubt that Arminius could recruit thousands of warriors. Schmitzer (399-417), Lehmann (419-430) and Manuwald (431-449) assess the reliability of the main literary sources, respectively Velleius Paterculus, Tacitus and Cassius Dio. Velleius may be guilty of pro-Tiberian rhetoric; Tacitus can be relied upon for events, but not for personalities; and Dio makes an honest, but complex and therefore sometimes contradictory, effort to explain what happened.

Throughout these papers, and elsewhere in the volume, the common understanding is that Kalkriese is in some way the scene of the Varian disaster. However, contrary views are cited and, indeed, those of Wolters (135-160) were deliberately solicited. The difficulties involved in accepting Kalkriese as the battle-site fall into two broad categories, archaeological and numismatic (Wiegels 96 and n. 21; Wolters).

Archaeologically, at the main site, Oberesch, the evidence is both clear and enigmatic: Wilbers-Rost (9-28); Tolksdorf-Lienemann (37-46); Harnecker and Moosbauer (47-73); Deschler-Erb (75-88). Here, Roman legionaries and auxiliaries engaged a sophisticated linear defence work as they moved (presumably, though this remains unproved: e.g. 54, 60) east-to-west through a 1km wide neck of land between hilly ground to the south and boggy moor to the north. What is odd is that this turf wall ran parallel to the Romans' left flank, not blocking their line of march; that it is only ca. 400m long; and that the Romans could anyway have avoided it by taking a better route to the north. All of this makes it difficult to ascertain the structure's tactical and strategic significance. And nothing else similar has been discovered since to ease this problem: Oberesch remains unique (Harnecker and Moosbauer, 49, 64). Furthermore, there are indications that the deposition of much of the militaria at Oberesch may have resulted not from fighting but from the processing of spoil retrieved from elsewhere by the inhabitants of an area now known (a major new discovery) to have been inhabited and relatively open (Harnecker and Moosbauer, 57, 59, 64-65, 68). Thus, even if Kalkriese is the general site of the battle, its focus was not at Oberesch (Haarnecker and Moosbauer, 60; Wolters, 140; Dreyer, 395).

Numismatically, it has been claimed that though the latest coins found at Kalkriese appear to indicate removal from circulation around A.D. 9, this is not necessarily the case because new coins of an immediately later date were not available for use and loss in the region (Wolters, 142-147). The Lower German coin stock - especially the bronze stock on which the dating of Kalkriese rests - of the late-Augustan/early-Tiberian periods was relatively old, and hoards and site-finds may have been deposited much later than their terminal coins appear to show. This helps solve another mystery. Literary sources relate that Germanicus campaigned extensively across the lower Rhine from A.D. 14. However, there is oddly little sign of his presence in the shape of contemporary coins. The void is filled if we extend 'Varian' circulation to create a 'Germanicus horizon' (Wolters, 141-145). On this basis, Kalkriese has been identified as the location of Caecina's battle at the 'Causeways' in A.D. 15 (Tac., Ann. 1.63-68). A wider implication of this revised coin dating is that other important sites, including both the military type-complex at Haltern and the 'new town' at Waldgirmes, both conventionally interpreted as having been abandoned immediately after the Varus disaster, may have remained occupied under Germanicus - with all the impact that this has on the general historical picture and the dating of associated artifacts (Deschler-Erb, 87; Kemmers, 190 and n. 26; Ebel-Zepezauer, 222).

In this volume, the archaeologists' response to controversy is restrained. Wilbers-Rost, Großkopf (29-36), Tolksdorf-Lienemann, Harnecker and Moosbauer, and Deschler-Erb (75-88) scrupulously present what has been found so far - animal, vegetable and mineral - difficulties and disappointments included. The sole suggestion related to the debate is that charnel-pits found near the wall result from Germanicus' burial of Roman dead in A.D. 15 (Wilbers-Rost, 22). The small scale and disrespectful arrangement of these features, however, make this implausible.

In contrast, the numismatists' response is very lively. As a matter of fact, Berger points out that, though ever more coins have been found at Kalkriese, none is yet post-Varus. In contrast, while known post-Varus sites produce few post-Varus coins, they produce some (113-117; cf. Rasbach, 331, on Waldgirmes). As a matter of interpretation, Wigg-Wolf (119-134) argues that the regional distribution of the aes coinage shows that, though there were anomalies in circulation, overall there was regular supply and a regular turnover. This means that, though there are difficulties in taking the date of its terminal coin to date the end of a particular series, analysis of a number of series produces distinct date-profiles that can be attributed to different periods. Thus there is a means of distinguishing both the 'Varus' horizon and the 'Germanicus' horizon, and Kalkriese belongs to the former. The principle of date-profiles is conceded by Wolters, 157, and used independently to reach much the same conclusions as Wigg-Wolf by Heinrichs: 259-264, 286-288.

Elsewhere, Dreyer refutes a number of historical and literary objections, including the 'Caecina interpretation' (374-375).

Where does this leave us? As Heinrichs, whose interpretation of the Cologne coins is flatly rejected by Wolters (144), says, we still have no clear resolution, only 'trench-by-trench combat, in some war of faith' (228). Work continues at Kalkriese, and the discovery of just one clear post-Varus coin would settle the issue for good. For the moment, however, the 'anti-Varus' case is unproven, and we may proceed on the basis that Varus perished to the west of Oberesch, after action involving a Roman army that was beginning to panic, but which was still a cohesive fighting force (cf. Dreyer, 395-396).