Daniëlle Slootjes: The Governor and his Subjects in the Later Roman Empire 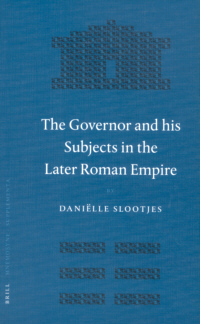 The core of this book is Slootjes' dissertation, presented in the Spring 2006 at the University of North Carolina at Chapel Hill. The stated goal of Slootjes' study is to explore the ways in which governors were perceived by provincials (5) in the Late Roman period between 284 and 527 CE, that is, from the reign of Diocletian to the accession of Justinian (2). The evidence collected concerns primarily the eastern provinces of the Roman Empire (4). For the most part, the study is based on a narrow range of literary texts, mainly Libanius, Menander Rhetor and Basil of Caesarea. Legal, epigraphic and archaeological material is also adduced to a small extent. The result is, in essence, a presentation and cursory discussion of a selection of sources concerning governors in the Late Roman period.

Chapter one offers a review of some known facts about the provincial governor in late antiquity: titles and ranks, appointment, length of office, staff, main duties in jurisdiction and taxation are discussed briefly. The 29 pages of this chapter include six on officials that stood higher than the governor in hierarchy: we are given fleeting portraits of the emperor, the praetorian prefect, the vicar and the bishop.

The subject of chapter two is the governor's role in jurisdiction. Though most governors had no legal training, they spent much of their terms giving justice (47-49). [1] An important question is who gained access to the governor's court, and how. Slootjes quotes legal sources clearly indicating that provincials had to pay a fee to gain access. Codex Theodosianus 1.16.6 and 1.16.7 (Constantine) both presuppose that (at least some) governors expected litigants to offer money in order to plead their cases before them (53; 57). Furthermore, an inscription from Timgad (Numidia) clearly shows that modest sums were paid to various officials at different stages in litigation (67 with note 77). While it is debatable whether such practices were widespread and whether they are adequately described and understood as corruption or not (61-62), there can be no doubt that they constitute an important parameter in the relationship between provincials and the governor's court, and they would have merited more attention than they receive here.

Chapter three deals with what the author terms "the responsibilities of governors as benefactors" (78), meaning their ability to benefit provincial communities through able government. Here, Slootjes' discussion touches upon the complex question of governors' involvement in the execution of public works. That governors undertook "projects of their own" as Slootjes states (81) is neither self-evident nor evidentially demonstrated here. Also not quite evident is the analytic purpose of Slootjes' distinction between "material" and "non-material benefactions". A category of "non-material benefactions by governors" is defined as 'favours' "granted to individuals, groups or communities as a result of a successful appeal" and as "all those actions that could assist provincials in ways that do not manifest themselves in a material sense and that are not laid down by law" (87). But in most cases it is impossible to establish with any degree of certainty that such 'favours' had no material consequences. Further, Slootjes distinguishes between material and non-material benefactions bestowed to governors by provincials, in other words honours. Honours in form of statues and inscriptions are termed material, whereas praise and cooperation are seen as non-material benefactions (98). Inscriptions and statues were, of course, the material expression of a non-material honorific act. The effort to categorize the evidence discussed appears in this case to be a source of confusion rather than clarity.

Chapter four is in essence an extension of the last part of chapter three, as it deals with literary forms of praise for the governor, speeches of welcome, poems and acclamations. With chapter five we are still in the wider subject of honours paid to governors, in this case in form of statues and inscriptions. Based as it is entirely on previous literature, this chapter would have profited from a recent book by D. Erkelenz concerning the republican and imperial times. [2] On the language of imperial government as reflected in an epigram for Oecumenius from Caria (137), the study by J. N. Adams [3] is now essential. Finally, the discussion on the choice of locations for setting up honorary statues (150-151) would have profited from W. Eck's discussion of earlier practices. [4]

The sixth and last chapter discusses acclamations as "a tool of resistance and criticism" (155), based mainly on Libanius' speech 33. It further considers the growing influence of bishops in confronting governors, based on Synesius' letters against the governor of Libya Superior Andronicus.

Some minor points: Menander Rhetor's work does not concentrate upon, or even mainly concern, speeches for governors, as the author (9) seems to suggest. The translation of Libanius, Ep. 838.4 (95) mistakes ἡμῖν for ὑμῖν ("your Council"). As translated, the passage is incomprehensible. The volume is not particularly well edited. Few of the quotes from Greek sources are free from printing errors and some are teeming with them. Mistakes and omissions in the references and bibliography include: "Kelly (2004)", presumably referring to C. Kelly, Ruling the Later Roman Empire, Cambridge 2004, which is cited twice (54, note 31 and 61, note 52) but does not appear in the bibliography, nor does "Kelly, CAH2 XIII" though it is cited often; the Cambridge Ancient History does not appear in the list of abbreviations on xv-xvi: an article by this reviewer appears in the bibliography but not in the narrative; "Miltner (1958)" (143, note 51) must refer to one of F. Miltner's many publications on Ephesus, of which more than one was published in the year 1958.

The Governor and his Subjects in the Later Roman Empire does not contain much that will be unfamiliar to specialists in the field of Roman administration, provincial history or late antique institutions. Its value lies in that it offers an overview and discussion of important sources on the position of the provincial governor in late antique society. As such it is a welcome contribution to a complex field that will be particularly helpful to students.

[3] Bilingualism and the Latin Language, Cambridge 2003.