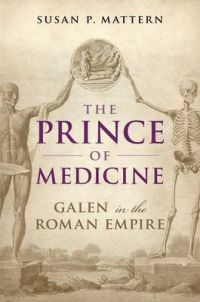 Susan Mattern's 2008 monograph Galen and the Rhetoric of Healing provided scholars with stimulating perspectives on Roman society, based on the numerous case histories related in Galen's works. In Mattern's new book on Galen, The Prince of Medicine, the focus has shifted to Galen's biography, his character, and his motives for practicing medicine. The target readership has also shifted: the general descriptions of Pergamum, Alexandria, Rome, life in an ancient city and gladiatorial combat are clearly addressed to non-specialists in ancient history. The sections that are aimed at the general reader, and in fact all sections of this book, are lucid and well investigated. Scholars who are not familiar with Mattern's earlier work on Galen, and students of the history of any period and at all levels, will profit greatly from this book.

The works of Galen represent roughly one-eighth of the classical Greek literature that survives (3). But there is very little information about Galen from other sources, and Mattern's assessments of Galen's life and character are based almost entirely on his own texts. Given those sources, a positive bias was almost inevitable, and the book includes a few superlatives to which not all readers will subscribe. [1] Even taking a more skeptical approach, however, it would be easy to conclude that Galen was a remarkable person indeed. If nothing else, his is a fascinating life story.

Galen was a Pergamene Greek who, though deeply devoted to his native city, chose to live most of his life at Rome. The best known medical expert of antiquity, he was also a speaker with performing skills comparable to those of his contemporary star sophists. His writings testify to his arrogance and egotism as well as to his altruism toward patients, irrespective of social rank as Mattern points out (289). Galen was critical of received knowledge, and was an experimenter and a keen observer of the physical world who nevertheless accepted dreams as a possible source of guidance on how to cure disease. In short, Galen emerges from his own writings as a personality of intriguing opposites.

The first chapter (7-35) begins with a description of Pergamum and an outline of the city's history and connections to Rome (7-13). There follows a discussion of the "aggressive self-consciousness" of Galen as a Greek (15), and of the urban culture with which he and his peers identified (18-23). The temple and cult of Asclepius at Pergamum are seen through the testimony of the temple's most famous denizen, the orator Aelius Aristides (25-28). There follows an attempt to reconstruct Galen's early years (28-35).

Chapter 2 (36-80) gives an account of Galen's training in medical theory and medical practice at Smyrna and Pergamum (36-44) and of his interest in pharmacology (45). The chapter includes an introduction to Empiricism, Dogmatism and Methodism, the three competing intellectual traditions in ancient medicine (46-52), and a discussion of Galen's relation to those traditions (52-54) and to his role model Quintus (54-57). Galen traveled extensively in his efforts to track down the students of Quintus (66-80) and to obtain precious medicaments (102 [chapter 4]). Among other places, his travels brought him to Alexandria where he spent maybe 4 to 7 years (69-80).

Chapter 3 (81-97) is devoted to Galen's appointment in 157 CE to treat the wounds of gladiators in the troupes of five successive chief priests (presumably of the imperial cult) at Pergamum, and includes discussion of Galen's surgical methods (93-95) and his instruments and materials (95-96).

Though titled "Rome", roughly one-third of chapter 4 (99-138) discusses travel conditions in antiquity and conditions of life for peasants, as Galen experienced them in his travels. Galen traveled largely on foot (105). We find him at Rome in 162, at the age of 32 (99, 112). The rest of the chapter is concerned with living conditions in the city of Rome, including its horrific public sanitation, dismal indoor air quality, and endemic disease. [2] We read about Galen's first friends at Rome, as well as his first enemies there, in a detailed description (128-138) of the two cases by which he rose to prominence in the "deadly city" (138).

Chapter 5 (139-186) continues the topic of Galen's first year in Rome, describing how his expertise in anatomy and his "gruesomely entertaining" (145) public vivisections of animals appealed to audiences at Rome. His friend and patron Boethus (179) was an ex-consul with a soft spot for anatomical spectacles, and served as Galen's "gateway into the highest social circles of the Roman ruling class" (163). Here, Mattern examines the connection between Galen's views on anatomy and his Aristotelian belief that all living beings were the artful and purposeful creation of a Demiurge (169-170). This leads to a discussion of Galen's attitude toward Jews and Christians (170-172), dreams (172-174), and divination and magic (174-176). His agnosticism on many metaphysical questions (176-177) and his views on religion (178-179) are also brought under discussion.

In chapter 6 (187-223), Mattern describes the plague at the time of Marcus Aurelius and Galen's experiences as a court physician and official preparer of theriac for that emperor (215-219). On the question of why Galen departed Rome in a hurry in 166 CE, his own account is difficult to make sense of (188). In Mattern's opinion it is not clear that he fled from the plague, but rather, he may have fled toward it, possibly motivated by rumors of the plague having struck the province of Asia (193-194). He was summoned back by the emperors in 168 (195), and seems to have spent the rest of his life at Rome.

Chapter 7 (224-256) takes up Galen's diagnostic techniques and treatments. He considered bloodletting a treatment appropriate for virtually any serious illness (234). Among the various illnesses that Galen encountered we find breast cancer (246), nerve damage (247), and epilepsy (248-249). He does not sharply distinguish between physical and mental illness (255).

Chapter 8 (257-278) draws on Galen's newly discovered treatise Peri Alypias (De Indolentia, Avoiding Distress), written in direct response to a fire that broke out at Rome in 192 CE and spread to the libraries and archives located on the Palatine (258). That fire destroyed valuable items belonging to Galen, including several manuscripts of his works (263). Here Mattern discusses Galen's ethical principles (for their role in helping him come to terms with this and other calamities [266-273]). The fact that Galen seems to have lived a very long life by the standards of his day (274), together with his conscious efforts to preserve his works for posterity, might help to account for the survival of such an unusually large body of writing (277) despite the fire.

The book's epilogue (279-290) tells the story of Hunain ibn Ishaq and Vesalius and offers a parting appraisal of Galen: though he was obsessed with fame and victory, he chose medicine because he wanted to heal people. To use the very words that Galen had used in praise of Hippocrates, he chose medicine "for the love of mankind" (289).

The bibliography lists 376 titles, the general index is exhaustive, and the editing is good, though not faultless.

[1] For example, Galen was, according to Mattern, the most influential figure not only in western medicine, but "perhaps in western culture generally" (3). Very favorable views of Galen are also found on pp. 179 and 231.