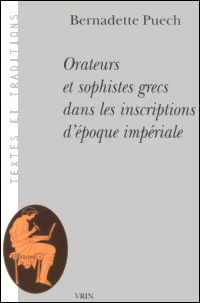 "For I am not an orator!" declares Dio Chrysostom in one of his orations. He was, of course, a famous orator. His assertion to the contrary, in this particular context, was another way of saying that he did not practice the techne of oratory for money. [1] Clearly implied here is a fact known from other sources: it was common practice for expert public speakers in Dio's time to make financial profit from exercising their skills, and such a person would be called an orator (ῥήτωρ). On the other hand, according to Aelius Aristides, a public speaker who received pay for his services was not to be called an orator at all. [2]

These are only two out of a variety of definitions, or rather, rhetorical stands, that can be found in ancient literary sources as to who could or should be called an orator. And as to who was a sophist and who was a philosopher, there is, among the representatives of the movement we call the Second Sophistic, no shortage of contradictory views.

Under these circumstances, compiling a collection of evidence concerning Greek orators and sophists in the Roman empire would appear to be a perilous venture. Orateurs et sophistes grecs dans les inscriptions d'époque impériale represents such a venture, and a successful one at that. This book acknowledges the limitations and difficulties posed by the evidence, aims at specific historical questions and reflects the author's sound critical and philological skills.

Orateurs is a prosopographical and epigraphical study of 184 personalities known to have practiced Greek oratory who are attested in inscriptions from Roman imperial times. Most of the persons date from the 2nd or 3rd century CE, so that the collection serves practically as a prosopographical companion to Philostratus's Vitae sophistarum (8). The book does not claim to be complete (2), and so is not a corpus. The catalogue finds famous individuals next to some that are known from only a few fragmentary lines, including some students. To the extent that it presents inscriptions found on both public and private monuments, the volume may be seen as a study of the epigraphical evidence for educated individuals' participation in civic life and for their visibility in commemorative activities. Paying closest attention to strictly prosopographical matters, Puech provides substantial historical and epigraphical commentary as well.

In the introduction, adequate space is given to the selection criteria for inclusion in this study (2-6). The author is well aware of the unavoidable methodological difficulties presented by the fluidity of the concepts "sophist", "orator" and "philosopher" (5, 10-15). Of the individuals studied here, only 134 are explicitly identified in epigraphical evidence as orators or sophists (3).

The geographical distribution of the evidence seems to challenge the impression that there were only four centres of rhetoric, Athens, Smyrna, Ephesus and Rome; Pergamum, Aphrodisias, and the larger sanctuaries were very important, too (17-23). Less convincing is the claim that the number of orators and sophists known to originate from a particular place and the number of records mentioning each can be seen to illustrate the mobility of particular individuals (table, 17). Inscriptions erected for an individual in his home city are, of course, no evidence for mobility, and it is unclear whether the total of inscriptions reported here to have been found at particular places (second column) includes inscriptions mentioning persons in their home cities.

The much-debated question of whether orators and sophists were bestowed public honours primarily for their literary pursuits or for their role as members of the ruling class is judged by Puech to pose an artificial choice. No less than in Classical times, orators under the Empire were at once politicians and intellectuals (24). Puech argues that the rise of some individuals beyond the level of local politics could be helped by paideia. Birth was of course important, but mastery of education could contribute to one's acceptance into the imperial elite (28). In fact, the Second Sophistic is dominated by the connection of two seemingly contradictory ideas: that the roles of citizen and intellectual are and should be complementary, and that paideia is and should be a superior value and the principal source of excellence (34). Finally, the author rightly stresses that Greek education played a role in Hellenizing Latin speakers and in reinforcing the cohesion of the ruling classes of the multi-ethnic Eastern Roman empire (31-34).

The catalogue (37-505) is organized alphabetically. There is no shortage of interesting cases; I select Claudius Rufinus of Smyrna to illustrate the whole. He is known from a passing, contemptuous remark of Philostratus (VS 608) and from a letter of the emperors Septimius Severus and Caracalla to the city of Smyrna. In the letter (no. 234), the emperors confirm Claudius Rufinus's claim to immunity from public office. Rufinus's concession to undertake an office at the city's request should not, state the emperors, affect his exemption from other services.

Puech with justice stresses the point that Claudius Rufinus had at no time lost his legal right to immunity. The city of Smyrna had respected this right, and it was the city that had elicited an imperial response to confirm it (440). Puech suggests that the council may have recognized Rufinus's legal claim to immunity in order to secure a potential benefactor's goodwill, while hoping that he could be persuaded to undertake an office from time to time (441). Rufinus indeed agreed to undertake the eponymous magistracy in Smyrna. The exchange that followed between the city and the Roman authorities in Rufinus's behalf, in particular the 'divine letter' sent by the emperor, need not have addressed an existing legal problem. Instead, that letter must have served to confirm Rufinus's existing rights and to guarantee them for the future (442).

A few thoughts may be added concerning the local circumstances that prompted the imperial letter. So, for example, Rufinus's right to immunity may have been officially challenged by one or more citizens of Smyrna: a polis was not, after all, a monolithic structure. Outside of Smyrna, at least one important sophist, Philostratus, certainly did not think highly of his Smyrnaian colleague, and prominent men tend to have more enemies within their own communities than without. If, in the end, a majority among Smyrna's leading caste thought Rufinus should maintain his privileged status, they may well have instigated an exchange with the Roman authorities to obtain additional support, and to further increase Rufinus's status.

The imperial letter addressing Claudius Rufinus's immunity, a convoluted six-line conditional sentence followed by the emperors' ruling, may have been penned by the sophist Antipatros of Hierapolis (439). [3] Puech offers the best solution yet to a problem concerning the restoration of a lacuna in line 1. She further proposes that the expression ἑκουσίῳ ἀνάγκῃ (l. 6), "voluntary compulsion", is an oxymoron well suited to describing the motives of euergetic activity (439). The expression is positioned by the drafter of this sophisticated piece in such a way that it can be linked to both players in the game: both the city, who exerted the pressure (προκαλουμένων), and the euergetes, who yielded to it (ὑφέστη τὴν στρατηγίαν). Puech's translation "la contrainte, librement acceptée" captures this extended meaning, even if it is impossible to render satisfactorily the syntactic and semantic intricacies favoured by writers of the Second Sophistic.

Elsewhere in this same document, however, Puech's translation misrepresents the text. The translation of διὰ τὴν προαίρεσιν ᾗ σύνεστιν ἐπὶ παιδείᾳ, lines 2-3, as "en raison du goût qu'il manifeste continuellement pour la culture" (439), corresponds exactly to Oliver's English translation of the phrase: "because of his ever present concern for education". [4] This translation gives σύνειμι a meaning that cannot be supported. Σύνειμι with a dative signifying a thing is an elaborate way to say "to partake in" or "to have"; τὴν προαίρεσιν ᾗ σύνεστιν means simply that Rufinus had a certain attitude, in this case one which was due to his education (ἐπὶ παιδείᾳ).

The reader of this book may not find all details in which he is interested in the catalogue or commentary, and may discover errors here and there, particularly among the bibliographical references. But misprints in Greek, including misplaced accents, are virtually absent. With a few exceptions, the volume is carefully edited and well organized, and the epigraphical points in the commentary, in particular, are forcefully argued and concisely presented. The bibliography, concordances and indices are extensive, and all of the indices are carefully produced.

Orateurs is well-informed, readable, and very useful, and can be highly recommended to scholars interested in the Second Sophistic, the Greco-Roman East, Greek epigraphy, or the prosopography of the Roman empire.

[1] Or. 43.6. The context of this assertion is provided by his claim that he was not a forensic speaker and that he did not use oratorical skills to pursue selfish goals and to gain advantage over his fellow citizens: οὔτ᾿ ἀργύριον λαμβάνω παρά τινος οὔτε δασμολογεῖν ἕτοιμός εἰμι τὴν χώραν τὴν ὑμετέραν οὔτ᾿ ἐν τῇ ἀγορᾷ φαίνομαί τινι ὀχληρός· οὐ γάρ εἰμι ῥήτωρ· οὐδὲ εἶπον ὑπὲρ οὐδενὸς ἢ ἑνὸς ἀνθρώπου δυστυχοῦς.