Jeremy Tanner: The Invention of Art History in Ancient Greece 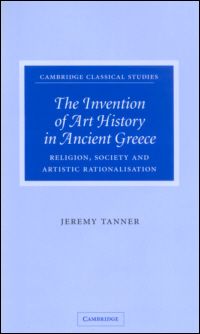 This is arguably one of the most ambitious, provocative, and interesting books on Greek sculpture to appear since the publication in 1990 of Andrew Stewart's Greek Sculpture: An Exploration. In this bold book, which is a revised version of a PhD dissertation submitted to the University of Cambridge in 1996, Tanner takes on many of the core interpretive issues in classical art history - the development of naturalism and the "Greek revolution" (chapter 2), the invention of individualized portraiture (chapter 3), the notion of the artist and artistic agency (chapter 4), the creation of the conceptual category of "art for art's sake" (chapter 5), copying in the post-classical period (chapter 6). His deployment of a sociological framework for the interpretation of Greek art ("art as expressive symbolism"), based primarily on the work of Talcott Parsons, will be familiar to those who know Tanner's work; his aim in utilizing this theoretical approach is "to develop a framework which not only interprets art, but also seeks to explain developments in art and in the institutional frameworks of art production and consumption in the context of long-term social and cultural processes" (19, author's italics). Tanner also uses Karl Weber's concepts of rationalization to think through why art changed over time and why certain styles emerged at certain periods.

The first chapter, in which he clearly sets out this interpretive approach, is, however, unnecessarily polemical, and at times downright uncharitable to scholars who have made major contributions to the field (e.g. Robertson, Boardman, Metzler, Hölscher, Stewart). It is hard not to feel at least a little irritated by this historiography (work of the 1970's and 80's comes in for particularly sharp criticism) and therefore to be somewhat resistant to Tanner's own project "to bring to classical art history the conceptual tools which will make possible the explicit and systematic exploration [...] of the production and reception of art" (19). It would be a shame if the tone of the first chapter dissuaded some from continuing, as the book has much to offer to the study of Greek art. Those readers who persevere will be richly rewarded for their efforts.

Tanner argues in chapter 2 that the change in the style of cult statues from the archaic to the classical period, and the development of naturalist images of the gods, had a specifically religious significance. According to Tanner, "the key differences between archaic statues of deities and classical statues lies not in their iconographic meanings as traditionally understood but in the way they appropriate the viewer's body in constructing affective attachment to religious and social orders" (54-55). Rather than being a symptom or a byproduct of a particular political development, such as the creation of democracy, or the result of aesthetic experimentation and innovation by great masters, such as Pheidias, naturalism developed within "the ritual performance of viewing cult statues" (89); naturalism allowed for a more immediate and direct relationship between the viewer and the god.

This new style is linked to the rise of democracy, and the shift in power from the old aristocratic elite, whose needs had been fulfilled by the Archaic style, to ordinary people, who desired a different relationship with the divine. Naturalism intensified the image's expressive effect on the viewer, and therefore enabled the viewer to establish a closer relationship with the god, to interact more directly and personally, without the intervention or mediation of the elite. While there is much to disagree with here (e.g., the association of votive kouroi/korai exclusively with the elite; the use of Roman ideal sculpture to stand in for Greek cult statues; the absence of any discussion of the Persian Wars; the argument that Athenian democracy was a motivating factor, when naturalism as a sculptural style can be found throughout the Greek world) Tanner's focus on a viewer-centered perspective and his insistence that we consider the ritual context of images are important interpretive interventions. While I found his formulation of the changes in artistic language provocative and at times compelling, not everyone will agree with his conclusion that Greek naturalism is a style which invites the viewer into a close, affective relationship with an image; indeed Jas Elsner has recently argued much the opposite, also from a viewer-centered perspective. [1]

Chapter 3 examines the invention of portraiture, also through the lens of the Greek revolution. Previous explanations that linked the birth of the portrait to the rise of the individual in Greek culture and the creation of democracy are, not surprisingly, found wanting; modern concerns with personal identity and portrait likeness are rightly marked as unproductive. Tanner suggests an alternative (although not altogether new) interpretive framework that seeks to understand the portrait as the visual expression of a person's social category or role, rather than as a realistic and recognizable likeness of a particular individual. He discusses the introduction of the word eikōn in the early 5th century and the important shift that it marks in the contemporary conception of figural representation: from statues of men that were indistinguishable from those of the gods in the Archaic period to statues of men that were differentiated from images of gods by the introduction of individualizing characteristics. This shift in language signals a shift in the function of these images; changed social and cultural dynamics "shaped the creation and development of a distinctive practice of portraiture in classical Greece" (109).

Tanner makes many interesting and important observations in this chapter, and his explanation of honorific portraits in democratic Athens as "reward symbolism" has much to recommend it. The only problem with his model is that it can not be used to explain portraiture in 5th century Athens - public honorific portraiture as a system of exchange between the Athenian demos and its benefactors begins in the early 4th century and not, as Tanner would have it, in the early 5th, contemporary with the introduction of Greek naturalism and the period of the Greek revolution. The portraits of Themistokles, Pindar, and Perikles were, as far as we can tell, private votive monuments, not public honorific portraits - only the statues of the Tyrannicides Harmodios and Aristogeiton, which Tanner rightly includes as portraits, belong in this category. Therefore, while I certainly agree with him that previous explanatory models for the invention of individualized portraiture in the early 5th century are in many ways unsatisfactory, his model, which associates the 5th century democratic revolution in Athens with the creation of a new type of image - the public honorific portrait - will not quite work either.

Chapter 4 focuses on the changing role and status of artists in classical Greece and "the range of factors - social, cultural, technically artistic - that condition artistic agency" (146). This is a complex and compelling chapter, and Tanner's use of the concept of agency and his analysis of the changing patterns of patronage to understand "the shifting balance between tradition and originality over time in Greek art" (147) makes for a much more nuanced and convincing account of the subject than those based on the conceptualization of the artist either as a creative genius or as an anonymous craftsman. As Tanner convincingly shows, one crucial component was the radical shift in art patronage patterns, from the large-scale polis-sponsored projects that dominated 5th century artistic production, in which the patron would have had the upper hand, to the smaller-scale and more often private commissions of the 4th century, which enhanced an artist's agency by providing increased opportunity both for individual creativity and economic advancement. Direct commissions were now frequently augmented by the making of works on a speculative basis; indeed, one of the most innovative and famous works of fourth-century sculpture, the Knidian Aphrodite by Praxiteles, was a work made "on-spec". Through the interaction of artists and intellectuals, art making itself becomes an intellectual project in which artists are consciously innovative and self-reflective about the processes and traditions of artistic production.

Chapter 5 deals with the practices of collecting, connoisseurship, and high-cultural viewing in the Hellenistic and Roman periods, when the artist of a work becomes at least as if not more important than its subject, a fact Tanner neatly demonstrates by the changing size and prominence of artists' signatures on statue bases. This chapter deals explicitly with the project framed in the book's title - the invention of art historical writing - and analyzes how this new genre informed and shaped artistic production. In the first part of the chapter, Tanner surveys what is known of these first art historians, looks at the intellectual and cultural contexts in which the invention of art's history took place, and explores the collecting and display of art by the Hellenistic kings.

Most of this is well-explored territory, but it does help to contextualize what is Tanner's real contribution - a new and interesting analysis of Roman cultures of art viewing and aesthetic appreciation. This elite culture of viewing prized "rational sensibility" and denigrated the "art lover" as deviant and lacking in self-control. The educated viewer experienced art in new display venues such as sculpture gardens and picture galleries, where this sophisticated, rationalist sensibility was reinforced and rewarded. An elite viewer could certainly experience aesthetic pleasure, but this pleasure was deeply rational and intellectual. This is a very rich chapter, with, however, a surprising omission - the Posidippus papyrus, published in 2001, is not discussed, although it clearly offers important evidence for Tanner's project.

The final chapter combines the concepts of agency and artistic rationalization in a productive exploration of the phenomenon of copying in post-classical art. This is in many ways the best chapter in the book. Here Tanner argues that "[r]ather than seeking to transform their inherited legacy by creating new styles or new motifs, artists rationally adapt that repertoire to a spectrum of contexts from the more functional to the more purely aesthetic, demonstrating their own capacity as agents through the rational tropes that they deployed in their contextually appropriate selection and adaptation of forms" (279). His discussion of selected copies and sarcophagi is organized around the concept of phantasia; his analysis of two strangely beautiful Pasitelean statue groups (the San Ildefonso Group and the "Orestes and Electra") is one of the best I have read. These sculptures stand as brilliant exemplars of the art produced by this post-classical, rationalist world; learned and retrospective, it is an art in which past traditions were appropriated, elaborated on, and recombined in innovative ways, the best art made more impressive and powerful in the process. According to Tanner, the creation of completely new artistic forms belongs to the artists of the Classical period; the artists of the post-classical world worked creatively within this inherited repertoire of forms and styles to produce art for self-conscious connoisseurs and collectors. While this model may not work for all of post-classical art or for all levels of artistic production - one thinks, for example, of late Hellenistic/late Republican portraiture - as an alternative framework for understanding Roman art that is Greek in style and subject matter I found it subtle, provocative, and persuasive.

[1] J. Elsner: "Reflections on the 'Greek Revolution' in art: from changes in viewing to the transformation of subjectivity," in: Rethinking Revolutions Through Ancient Greece, edited by S. Goldhill and R. Osborne, Cambridge, 2007, 68-95.