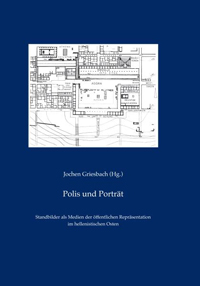 This handsomely produced and beautifully illustrated book publishes the papers delivered at an international colloquium that took place in Munich in December of 2009. The volume offers an introduction to and a preview of the new and exciting work that is currently being carried out - mainly, but not exclusively - by German and French scholars, on the history of honorific portraiture in the Greek East. The papers are organized thematically. The display context of portrait monuments within the different spaces of the Hellenistic polis and the historical development of honorific practices are among the unifying threads. Some of the chapters are site-specific (i.e., Thasos, Delos, Olympia, Pergamon, the Athenian Acropolis), while others focus on broader themes (e.g., public vs. private portraits, portrait statues in temples, statues of strategoi). Most rely heavily on epigraphic evidence, although sculptural, architectural, and archaeological evidence is productively deployed whenever possible. And while the main chronological focus is the Hellenistic period, some of the chapters take a longer view to consider honorific practices in the imperial period. It makes good sense both historically and archaeologically to consider the process of setting up portrait monuments in the later Hellenistic and early Imperial periods together, particularly in the Greek East, where many Hellenistic-looking marble portrait statues may well be early Imperial in date, and where honorific practices of the 1st century B.C.E. tend to continue into the 1st century C.E.

I focus here on a few of the papers that examine the historical development of portrait dedications in specific contexts, as this is also a current research interest of mine. Frédéric Herbin surveys the changing landscape of votive and honorific portrait monuments in the Sanctuary of Apollo on Delos from 314 to 69 B.C.E., focusing on where the monuments were located and how these locations as well as the forms of the bases change over time. His study documents a number of interesting developments: a more diverse international constituency is represented in the monuments set up during the period of Delian independence, while Athenians and Italians dominate the monument landscape during the period when Delos was under Athenian control. In addition, many more monuments were set up in this later period, even though it was significantly shorter. For the types of monuments, he finds that monolithic square bases, composite bases, and orthostate bases comprise about 60% of the monuments set up during the earlier phase, while after 167/6 monument types become less diverse and exedrae become exceedingly popular. Spatial patterns also show a shifting landscape: as spaces of great prestige, such as the SW area of the Sanctuary proper, around the temples of Apollo and so-called Horned Altar, became increasingly crowded with monuments, activity by necessity moved elsewhere. The epiphanestatos topos of inscriptions was a moving target.

Herbin's study brings out the dynamic and changing nature of honorific practice on the island, and the various strategies used by patrons to distinguish themselves in this crowded landscape, a pattern one sees clearly elsewhere on Delos. Monika Trümper considers in detail the practice of dedicating and displaying honorific statues in the 'Agora of the Italians', built in the later second century B.C.E. and prominently situated between the Sanctuary of Apollo and the Sacred Lake. Her careful analysis of the architectural setting of the statues is a model study of display context. The honorific statues in the Agora were set in a series of grand rectangular and semi-circular niches, an astonishing 27 in number, arranged around the colonnade of its enormous open courtyard. Constructed in quick succession, they accommodated standing heroic statues, like the well-known statue of Ofellius Ferus, cuirass statues, and - most surprisingly - equestrian statues; the men honored were mostly Romans and Italians. The niches themselves tended to became more elevated above ground level and grander over time, a striking example of the competitive nature of statuary display that one can also see playing out in the increasing height of statue bases along the Delian Dromos. The result of Trümper's detailed study is an evocative reconstruction of an unusual honorific practice that appears to be unique to this particular context.

Honorific statues continue to be set up on Delos in the Imperial period, although their numbers are significantly reduced; honorific practice at both Pergamon and Thasos, however, tells a different story. In her chapter, Marianne Mathys focuses on the statues set up in the Sanctuary of Athena, located in the immediate vicinity of the royal palace on the citadel at Pergamon. For most of the Hellenistic period, this area was reserved for the statues of the Attalid rulers and their victory monuments. For a brief period of time in the later Hellenistic period, priestesses of Athena begin to be honored with portrait statues in bronze set up by the demos. This practice falls out of favor in the second half of the 1 st century B.C.E., as the demos shifts its attention to honor Romans and local citizens involved in the imperial cult. When statues of priestesses reappear in the 2 nd century C.E., they are now mostly made of marble and are life-size or slightly larger, and therefore contrast with the earlier bronze, mostly under life-size statues of the Hellenistic priestesses.

As Guillaume Biard's study demonstrates, the coming of Roman power also had an effect on honorific practices in the agora of Thasos. Monumentalized and regularized over the course of the Hellenistic period with the construction of porticoes, the agora only begins to attract statue dedications in the 1st c. B.C.E.: twenty-three bases from the late Hellenistic to the early Imperial period are preserved. A number of the marble heads found in the agora show the importance of priests, probably of the imperial cult, in this new portrait landscape. The multiplication of bases in front of the NW portico, the large base at the center of the agora for the family of the emperor Augustus, and the line of exedrae along the south also clearly show that "statues attract statues" [1], a clever coinage that encapsulates the contingent nature of epiphanestatoi topoi.

In sum, the chapters in this volume are model examples of how to do careful historical and archaeological research on honorific portrait statues, and should be required reading for anyone interested in Hellenistic and Roman portraiture. The authors demonstrate time and again that much more can be said even about material that is well known and/or excavated long ago. More work, of course, needs to be done, and many of the chapters point towards productive areas for future research. In fact, many of the authors included here also have significant studies either recently published or forthcoming: these include books by Ma and Mathys [2], and studies in preparation by Griesbach, Herbin, and Biard [3]. It is truly an exciting time to be working on the history of honorific portraiture in the Greek East, and the editor should be congratulated for bringing together such a stimulating set of papers.