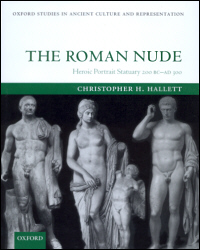 Christopher Hallett's new book is a much revised and expanded version of his 1993 dissertation written at the University of California at Berkeley. While a number of the nude portrait statues dealt with here, such as the "Tivoli General" or the statue of C. Ofellius Ferus from Delos are very well known and frequently appear in general books on Greek and Roman art, this study is the first to gather all the known examples of the type and consider them as a group. The 326 nude male portrait sculptures listed in Appendix B (312-331) attest to the remarkable popularity of this genre of representation for both imperial and private subjects, and suggest that the problems we perceive with Roman nude portrait statuary are mostly of our own making. This book, which is intended to appeal to a broad audience of classicists, historians, and art historians, deserves a wide readership among students and scholars of the ancient world. And since heroic nudity and divine attributes are recurrent themes in portrait representations, it can also be read with great profit by art historians of later periods.

The main part of the text is organized into 7 chapters, which are arranged in a broadly chronological framework. Each chapter is helpfully divided into thematic sections whose topics are clearly indicated in the section headings, making this complex text easy to navigate. The author clearly sets out the premises and aims of the study in the introduction. Modern scholarly reception of the Roman heroic portrait has been notoriously unkind ("an error in taste"; "an aesthetic catastrophe"), and Hallett argues that this generally negative attitude has prevented us from understanding the full range of positive meanings these images were designed to express about their subjects.

Because the nude portrait has its origins in Greek art, the book begins with an in-depth study of the contexts and meanings of nudity and nude portraiture for the Greeks (chapters 1-2). The precise semantic force of nudity in Greek art is still a matter of some controversy. Male nudity in art was not confined to images of athletes or erotic courtship, where it would have been logical and realistic; nudity in art was deployed in a wide range of narrative contexts, such as scenes of battle, in which it does not realistically belong. Hallett reviews the various interpretations of what is usually called "heroic" or "ideal" nudity, particularly those of Nicholas Himmelmann and Tonio Hölscher [1], and suggests that by the later fourth century male nudity came to be regarded as "an important component of heroic appearance" (19). That is, because a man's heroic qualities are tested and demonstrated in contests of physical strength and bravery, such qualities could best be represented visually by athletic nudity ("agonal" nudity, the designation preferred by Hölscher) or what Hallett calls the "heroic portrait costume".

The deployment of this portrait costume for the statues of Hellenistic rulers, sometimes with weapons and sometimes with divine attributes, is probably most directly relevant for the adoption of this portrait genre for leading Romans, the subject of chapter 4, but Hallett's careful analysis of the full range of male representation in late Classical and Hellenistic grave monuments is important for understanding the broader context in which the Hellenistic royal images developed. He suggests that the origins of the Roman heroic portrait are to be found in the 2nd c. BC in the Greek East in the Greek practice of reusing already existing royal portraits in heroic costume as statuary honors for Roman generals and promagistrates (137-48). Since these Roman officials tended to occupy a position analogous to the Hellenistic kings, the local population would have honored them in a similar way - not with statues in civic costume, as Klaus Tuchelt has suggested [2], but with statues in armor or heroic nudity.

This would mean, of course, that the Italian businessmen on Delos were not responsible for this "dramatic innovation" in portrait representation, since they would not have been the first Romans to be shown naked in their public statues; the statues from Delos are merely the earliest preserved examples of this portrait genre. Given the widespread pattern we see in other artistic genres of the emulation of elite practices by the middle-class bourgeoisie, this model makes better sense of the available evidence. I was disappointed, though, that the author did not take the opportunity of a delay in publication (see Acknowledgements) to take into account a recent article by Jeremy Tanner that covers this same topic, but which offers a somewhat different interpretation [3].

The function and meaning of the nude portrait in the imperial period is the subject of chapter 5. Hallett's main aim in this chapter is to explain the symbolic significance of heroic costume in Roman imperial art. He surveys a wide range of archaeological evidence from diverse contexts, ranging from virtuoso imperial court portraiture to more modest freedman tomb statues. To be represented nude with weapons in your portrait statue was clearly a very popular choice, despite the Roman attitudes towards nudity in life that the author documents in chapter 3. Hallett argues that the nude heroic costume was able to express much more clearly and more effectively than any other Roman portrait costume "those virtues that made a man seem like a hero to his contemporaries" (219). It was the visual equivalent to the language of praise frequently found in funerary inscriptions that celebrated men for their legendary bravery and women for their legendary beauty.

While many examples of Roman statues in heroic costume, particularly those of non-imperial subjects, are indeed from funerary contexts, Hallett shows in chapter 6 that the traditional association of nudity in portraiture with divine honors after death is not supported by the evidence. His careful review of the images of deified emperors in fact demonstrates that Divi are represented wearing the toga and not in "Jupiter costume", as is usually assumed (225-229). This new and important observation means that a great deal of well-known statuary needs to be reconsidered. Building on the recent study of Marianne Bergmann [4], Hallett convincingly argues that "theomorphic portraits" are not meant to represent the subject's deification or apotheosis - that is, they do not represent the person as a god; rather, nude portraits with divine attributes give to their subjects the divine qualities that particular deities were thought to possess.

Finally, Hallett reassesses the traditional interpretation of the combination of Roman style "veristic" heads with Greek style nude bodies. Rather than seeing head and body as composite parts, Hallett argues that their Roman audience would have seen these images not only as coherent representations but also as powerfully gripping ones. The incongruity between head and body that seems so obvious and indeed so disturbing to us now has prevented us from seeing these statues as the Romans themselves surely did.

Hallett's provocative and elegantly argued book reorients our way of seeing these images, while demonstrating the importance of considering the widest range of available evidence - literary, archaeological, art historical, historical, Greek, Roman - in order to understand the full semantic force of these expressive and expensive cultural objects.