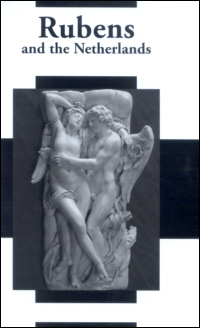 In her polished Introduction to this interesting volume, with its rather ambiguous and misleading title, Mariët Westermann adds further confusion by broadening its remit to 'The North' and adds to it by describing Antwerp as the 'Capital of the North'. The notion that Rubens was typically 'northern' by choosing to work in his home town she justifies by listing a very few, northern artists who stayed in Italy; her point would have been compromised if she had also mentioned Sustris, Cort and Giambologna, not to say Sustermans, who features in one of the essays. The Manichean premise of the volume - the distinction between north and south - ignores the cosmopolitan character of Antwerp at the time.

Not tackled in the volume is a badly needed study of Rubens's pre-Italian years in the Pays-Bas royal. Nor is broached any full discussion of that quintessential aspect of Netherlandish painting, landscape. Portraiture, too, receives no prolonged consideration. None of Rubens's great cycles, apart from that for the Jesuit Church, and none of his great altarpieces are discussed, so the story told here, chiefly in English and nicely illustrated in black and white reproductions, is rather limited.

The only altarpiece to be investigated is The Real Presence of the Holy Sacrament (Antwerp, St. Pauluskerk) of ca. 1609. The late Cynthia Lawrence develops her views first advanced in 1996. She concentrates on identifying the protagonists: valuable are her proposals for the figures immediately to the left of the altar as those associated with the institution of the Feast of Corpus Christi. Less sure are the other identifications especially that of the half-naked figure in the centre as Seneca. His presence is to be understood in the light of the Conférences de Controversés organised following the signing of the Twelve Years Truce in 1609. Seneca is there, it is argued, because of his advocacy of clemency; but such prominence accorded to a pagan - even if an honorary Christian - in such august company discussing a vital issue, seems implausible.

It is likely that both Michael Jaffé and Julius Held would have found Philip Vermeylen's account of Rubens's relations with the Oratorian Fathers and his altarpiece for the high altar of the Chiesa Nuova nearly as problematic. In their standard accounts, they relied on the two letters written, one by Rubens, after the meeting of 30 January 1608, in which the problem of lighting is emphasized as the issue rather than the criticism of the treatment of the upper half of the altarpiece. Vermeylen ignores the fact that Rubens himself initiated the January debate and that he subsequently received another commission from the Oratorians; to describe the Fathers earlier as having been 'coerced' to patronise Rubens because of Serra's generosity seems a little harsh. Nevertheless Vermeylen's courteous playing of the 'devil's advocate' should stimulate renewed consideration of the artist's problems with the Chiesa Nuova, with Duke Vincenzo, and, indeed, of his last year or so in Italy.

Welcome is Eveliina Juntunen's analysis of the Wallraf-Richartz Juno and Argus as an allegory of Rubens's artistic credo in contrast with Goltzius's picture of the same subject in Rotterdam, as is Anna Knaap's new look at the upper galleries of the Jesuit Church. That the view of the church's interior, reproduced partly to illustrate the point that the paintings did not have to be viewed in a paired typological sequence, is not by Neeffs and Vrancx but wholly by the latter, should be stated for the record, although the argument is not affected. As elsewhere in this volume, the reading of contemporary texts is impressive and detailed; Knaap's archival research reveals that in May 1617, Van Dyck was quite a generous donor to the church.

Lucy Ann Davis assembles a group of engravings and well researched literary sources to clarify our understanding of the St. Petersburg Bacchus, in which wine is celebrated as a means of stimulating creativity; it is consumed here by a typically Netherlandish, fat Bacchus. To illustrate Rubens's own subscription to the theory, she quotes from William Sanderson's Graphice of 1658 (not his memoirs (sic)), a quotation, which, incidentally, was first singled out by Oliver Millar in the 1950s. Davis believes that Sanderson visited Rubens's Antwerp studio in 1628. More likely the two met in 1629 when Sanderson acted as the Earl of Holland's secretary in his capacity as Chancellor of Cambridge University; Rubens was of the party that accompanied the Earl on his first visit to Cambridge.

The Bacchus may be one of Rubens's least appealing pictures, in contrast is the widely admired, contemporaneous 'War Allegory' in the Palazzo Pitti. Ulrich Heinen's discussion of it is subtle and stimulating, as he shows it to be something much more than a condemnation of war per se: peace in the form of Venus follows war. But his reading of the woman in black as Antwerp rather than, as Rubens would have it, Europe, seems a little forced. Heinen has made important contributions to Rubens scholarship in his native German; here he has been very poorly served by his editors by their not improving the English translation.

The editors should also have saved Paul Hottle from making one or two unnecessary mistakes in his useful overview of a subject treated thirty years ago by Konrad Renger: Rubens's dedicated prints, made and published under his supervision by Vorsterman. The theory that Rubens embarked on this unusual enterprise as a means of enlarging his clientele in expectation that the Twelve Years Truce would not be extended is unconvincing. But Hottle commendably tries to explain why certain individuals were singled out as dedicatees; the choice of Juan de Velasco is significant for it shows that Rubens was associating with men in Spanish, public service before the death of the Archduke Albert.

Rubens's relations with Vorsterman were unhappy; Elizabeth Honig deals with a happier collaboration in her deeply researched study of the fruits of the friendship between Rubens and Jan Brueghel the Elder, particularly as displayed in the Mauritshuis Fall of Man. Her essay is somewhat overshadowed by the catalogue of the Rubens & Brueghel A Working Friendship exhibition of 2006/07. The Getty Mars disarmed [?] by Venus - the centrepiece of that exhibition - has a double-page reproduction, although it is only briefly referred to in the text. Indeed this newly discovered painting may well be over-catalogued, miss-described and over-praised. The attribution of the figures to Rubens is hard to sustain when they are compared with those in the Munich Crowning of Heroic Virtue.

Honig's text is driven by an infectious enthusiasm such that she occasionally overstates her case. For instance, she argues that Cornelis van Haarlem and Roelandt Savery were inspired to collaborate in the execution of a Fall of Man in Haarlem in 1618 by the Rubens and Brueghel painting then in a 'local [to Haarlem] collection'. But we only know that the latter may have at some stage been in a Leiden collection. Friendship and collegiality, on which Honig lays great emphasis, would have made collaboration possible, but do not explain why it happened. Money is the one word missing here and in the catalogue. Brueghel and Rubens are both viewed as if they were living off bursaries. Perhaps they worked together to meet a particular demand, but this would not explain why Brueghel also worked promiscuously with Van Balen, and Joos de Momper. Finally what is to be made of Rubens's collaboration later in his life with Cornelis Saftleven?

At the same time that Rubens was adding figures to Saftleven's work, he was collecting paintings by Brouwer, who was also a new arrival in Antwerp. Karolien de Clippel's survey of Rubens's affiliation with Brouwer will be the point of departure for any further discussion on the topic, though her text, too, would have benefitted by more attentive editing. Not mentioned is Brouwer's Haarlem 'monochrome' palette, for notably it did not influence Rubens; while the design for Jegher's woodcut of Hercules crushing Discord, which she compares with Brouwer's Two Boors Fighting, was very probably formulated before Brouwer's arrival in Antwerp.

There was no work by Caravaggio in Rubens's estate, but there is evidence enough of Rubens's admiration for the artist earlier in his career. Irene Schaudies charts Rubens's attitude to the Italian master, but largely avoids what might be thought of as the well-trodden path around his play on Caravaggio's great Entombment. Her comparison between Rubens's Satyr and Bacchante and the Boy with a Basket of Fruit, as with her treatment of Snyders, ignores the Antwerp tradition of still life painting - a matter that surely should have been picked up by her editors!

Caravaggio's Incredulity of St Thomas is the point of departure in Barbara Haeger's particularly impressive disquisition on the Rockox epitaph: it is an admirable, close reading of the triptych built on the earlier studies of Monballieu and Freedberg. Relying on Jesuit commentaries, she provides a very full interpretation of the work, whose subject Rubens made into a meditation on physical and spiritual seeing as a means of believing in Christ's resurrection and in personal salvation. Rockox's intense but detached demeanour is well described as a portrayal of the meditative state, which is repeated in the left-hand wing of the Descent from the Cross. As with every aspect of Rubens's art, there is in this work a great wealth of allusion and richness of meaning that is here unearthed in depth and detail.

Sadly there is no Index to this stimulating volume, which in spite of its faults, shows that there is plenty of life in Rubens scholarship. Here the emphasis seems to lie in iconography, with connoisseurship playing a more secondary role, perhaps still in reaction to the jejune tussles between Jaffé and Held of several decades ago.