Herman Roodenburg: The Eloquence of the Body. Perspectives on gesture in the Dutch Republic, Zwolle: Waanders Uitgevers 2004 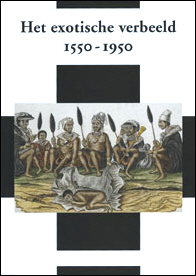 This volume explores the phenomenon of an explosion of images in the depiction of 'exotic people' in the Low Countries from the second half of the sixteenth centuries onwards. Both the everyday 'barbarians' (that is peasants, beggars and other people at the edges of society), as well as the 'barbarians' overseas became popular subjects for artists.

As Herman Roodenburg states in his introduction, this juxtaposition is inspired by an article written in 1987 by the art historian Paul Vandenbroecke who, reflecting on arguments used by the social sciences, argued that the depiction of the internal and external others functioned as mirrors for the elite. These others told the Dutch elite what they were not; a matter of negative self-definition. While Vandenbroecke limited himself to the 15th and 16th centuries, this volume discusses topics with a much wider time span.

In the last decades, the historical interest in Europe's cultural confrontation with both its internal and external others has greatly increased. One of the most outspoken authors has been Edward Said who re-interpreted 'orientalism' as a kind of covert Western imperialism which survived the collapse of colonial empires. In other words, the economical domination and exploitation of the oriental world continues even though colonialism has formally ceased to exist.

This interpretation might hold (some) truth for an overall approach or outlook on the Orient. It is, however, to be doubted that it is valid for the world of the arts as well. Both in this volume as elsewhere it is argued that the arts were actually quite open to other traditions. The world of art both supported imperialism and political domination, but also played its role in the liberation from the existing conventions.

Exciting recent developments in both folklore studies and cultural anthropology play a major part in the volume as well. Traditionally, studies in these fields did not bother about the aspect of time. The groups they studied were supposed to live on an island of time: while the urban society moves on, the farmer is supposed to go on with his life as he has done for centuries. History and civilization were denied to large parts of the world. World Exhibitions showed applied art from distant parts of the world alongside indigenous European applied art, but also remote savages side by side with indigenous peasants. 'Indians', according to 18th century writers, could be found both in Sicily, Ireland and the West Indies.

The 'others' were measured against the standards of civility, a notion which was developed from the 16th century onwards. The others could be measured and classified as Ernst van den Boogaart demonstrates: the Australian Aborigines were definitely barbarian while the Chinese were considered almost as civilised as the town-dwellers in Europe.

Eveline Koolhaas-Grosfeld in turn examines how in the Netherlands the folklore of the villages around the Zuyderzee was cheered in the 18th and 19th centuries as being typically Dutch. The costumes of the men and women from Volendam and Marken were symbols of originality and antiquity: typically Dutch. In this fashion folklore could play its role in the creation of the Dutch nation and state.

All in all ten authors approach the subject of exotism in this volume in an exciting way. The multidisciplinary approach of the various authors creates a rich variety of insights. And it is always refreshing to see art studied in an open dialogue with contemporary society in general.