Katja Mueller: Settlements of the Ptolemies 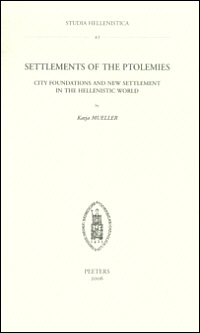 Mueller's stimulating work engages with both new and recently-revived trends in the study of Hellenistic history with, for example, its attention to the themes of colonisation, ethnic interaction and the foundation of new settlements. [1] The author claims to fill a gap in scholarship: 'there has never been any serious attempt at evaluating the mechanism of Ptolemaic settlements' (184). The subtitle City Foundations and New Settlement in the Hellenistic World reflects her intention to 'to retain a global view of Ptolemaic settlements, that is, to survey new settlements throughout the whole of the Ptolemaic empire' (4). [2] In fact most of the book, and especially some of the best-argued and most original sections, focus on Ptolemaic foundations in Egypt. Thanks to her knowledge of the Egyptian language, the author is able to make the most of Demotic and hieroglyphic texts, which have tended to be overlooked in the previous scholarship; [3] this is particularly evident in Chapter I, where Mueller investigates dynastic toponyms, the extent of 'translation', or rather 'adaptation', of Greek toponyms into Egyptian, and the issue of double toponyms in both languages which are independent of each other.

Her research, especially on patters of migration (Chapter IV), benefits from the data gathered in recent works such as W. Clarysse - D. Thompson, Counting the People in Hellenistic Egypt (Cambridge 2006), C. La'da, Foreign Ethnics in Hellenistic Egypt (Leuven 2002) and the Fayum Project http://fayum.arts.kuleuven.ac.be/general/stat_fayum/Stat_fayum.html currently in progress. Archaeological surveys are also an important source of information, enabling different types and methods of settlement to be traced from the impact which foundations had on the territory (see 77, Table 2.2). One of the most fascinating sections of Chapter III is devoted to the comparison between ancient Egyptian town-planning and Greek foundation patterns, which often co-existed and were probably used simultaneously.

Ptolemaic settlements provided access points and a communications network throughout a vast area, including Egypt, the Aegean islands, the coast of Asia Minor and the Red Sea, and even, at times, part of mainland Greece. Ptolemaic settlements are examined, according to the theoretical models used in geographical studies, as "Systems of cities". The tighter the network (at every level), the more it could promote economic growth and political stability. The aim of the book is to investigate the phenomenon, and possibly to trace common patterns of relocation/migration and common structures in the new settlements founded by the Ptolemies. The reasons for establishing new settlements varied: some were strategic strongholds, others commercial centres, while others only performed a role in the agricultural economy. Ptolemaic settlements generally differed from Seleukid foundations in their smaller size and frequency. Ptolemies chose areas of low population density to settle people and increase the exploitation of a region. In spite of the statement by Theocr. Id. 17.86-90, the Ptolemies generally avoided the foundation of Greek poleis, [4] preferring instead smaller settlements with a more direct impact on the rural economy. Egypt is the region with the highest frequency of settlements, followed by the Red Sea coast and Coele-Syria, while in other regions we find no more than two/three settlements each.

The Leitmotiv of the book is the concept of adaptability. A significant degree of diversity characterises the Ptolemies' approach to their possessions and their subjects, as they responded flexibly to the varying features of the lands they aimed to control. Ptolemaic settlements combined two opposing, yet unifying, phenomena: "the equal distribution of dynastic names and the application of 'unequal' foundation methods" (181).

An important result of Mueller's work is to underline the fact that it was not institutions but rather individual officials (such as Boethos, whose activities are revealed through some unpublished papyri of the Trier collection, see 159-165) who held together and developed the Ptolemaic 'empire': in recent decades progress in Ptolemaic prosopography and studies of individual philoi seem to have reached the same conclusion. Another important feature, which confirms earlier advances in research, is the assessment of the multicultural nature of all the Ptolemaic settlements.

After a brief introduction the book is divided into four chapters (I. Dynastic Toponyms; II. Ptolemaic Foundations as Regional Systems; III. Ptolemaic Foundations as 'Urban' Systems; IV. Colonising Egypt and the Eastern Mediterranean), followed by a Conclusion and three Appendices: 1. Chart of Estimated Population Size for Settlements in the Ptolemaic Fayum; 2. a useful translation into English of the Pithom Stela, which concerns the foundation of Arsinoe near modern Suez and Ptolemais Theron on the Ethiopian Red Sea coast (cf. 130-131); 3. a Gazetteer of Ptolemaic Dynastic Settlements including, for each settlement, its Greek and Egyptian name - possibly with dynastic origin -, its original name, location, founder and date of foundation, first appearance in the sources, size, foundation method, features, definition (polis, village, etc.) and basic bibliography. A general Bibliography of 36 pages concludes the volume.

Given the mathematical and topographical nature of most of its contents, the book is completed by nine figures, eight maps and sixteen tables with graphics (including histograms and pie-charts). General maps are placed at the beginning of the book (5-7), but it would have been useful to have more detailed maps in Chapter IV (143-160) to aid comprehension.

The high theoretical awareness, wide scope and variety of data and sources used make this book a very valuable contribution to understanding the Ptolemaic settlements and the internal policies of the Ptolemaic 'empire'. As Mueller seems aware (184), however, this can be seen as a starting-point for further research: this would involve cross-cultural studies (including the exploitation of the vast amount of Demotic papyri still waiting to be published), network analysis and the conduct of archaeological surveys in the areas around the Mediterranean, since too many Ptolemaic sites have not yet been fully excavated.

Although generally very clear, the volume nevertheless requires close reading since many complex issues are addressed in the space of about 200 pages. Mueller assumes in the reader a knowledge of the most important recent theoretical trends in historiography and geographic studies and the mathematical jargon used at times (e.g. in Chapter III, on estimates of population size) [5] is less appealing to a general reader. The book will be useful primarily to ancient historians and papyrologists, but also to historians in general, anthropologists and geographers. It will also be of interest to scholars of Hellenistic literature, enabling them to frame the literature of this period in the vivid context of a world of networks, migrations and continuous changes.

[1] See, e.g., G.M. Cohen, The Hellenistic Settlements in Europe, the Islands, and Asia Minor, Berkeley 1995 and The Hellenistic Settlements in Syria, the Red Sea Basin, and North Africa, Berkeley 2006, and the PhD thesis by Céline Marquaille, The External Image of Ptolemaic Egypt, King's College London, 2001, which Mueller often refers to. The way was prepared decades ago by studies such as The Administration of the Ptolemaic Possessions Outside Egypt by R.S. Bagnall, Leiden 1976. Works on Ethnicity are too many to be listed here.

[2] Disputing the definition of 'Empire' (Hölbl) and the possibility of applying modern concepts of imperialism and colonisation to the Ptolemaic context, Mueller adopts the definition "Ptolemaic sphere of influence" (42). According to her, a reassessment of the issue of Ptolemaic colonisation is long overdue (76), and most of Ch. IV is devoted to this subject, where she criticises some simplistic general beliefs (e.g. the primacy of Ptolemy II as a founder; the clear-cut division of colonisation into two main phases). On colonisation, compare the views of R. Bagnall, Decolonizing Ptolemaic Egypt, in Hellenistic Constructs: Essays in Culture, History, and Historiography, edited by P. Cartledge, P. Garnsey, E. Gruen, Berkeley-Los Angeles-London, 1997, 225-241 and P.Vasunia, The Gift of the Nile, Berkeley-Los Angeles-London 2001.

[3] The author is indebted to the long tradition of study of bilingualism and the interaction between Greek and Egyptian culture in Hellenistic Egypt carried out at Leuven and Cambridge and in Germany.

[4] Only three proper Greek poleis existed in Egypt (the pre-Ptolemaic Naukratis, Alexandria and Ptolemais Hormou, a foundation by Ptolemy I Soter), and no other was ever founded: poleis could have claimed autonomy, thereby disrupting the centralized Egyptian system inherited by the Ptolemies. Moreover, colonizers and settlers were not all Greek - in the Fayum they were actually mostly Egyptian, not requiring a polis to settle in.

[5] On the subject see also her contribution Statistical Applications for the Graeco-Roman Fayum. Three case studies at http://fayum.arts.kuleuven.ac.be/general/stat_fayum/Stat_fayum.html.