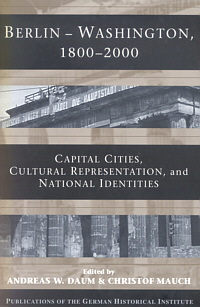 At least since Jerusalem, Athens, and Rome, cities have drawn and repelled but always fascinated the cultural imagination. With the emergence of modern nation-states, capital cities have come to occupy a special place in that thinking. In recent decades scholars in many disciplines - history, political science, urban planning, architecture, and literature, among others - have increasingly turned their attention to the nature and role of those unique urban centers.

With the implicit assumption that comparison and contrast sharpen our perceptions and understanding, Andreas Daum and Christoph Mauch recently organized a conference at the German Historical Institute in Washington, DC, to consider parallels between Berlin and Washington from 1800 to 2000. The historical and theoretical overview of the generalizing introductory essay on global "Capitals in Modern History" (Andreas Daum) suggests four principal criteria - political, economic, social / ethnic, and cultural - that provide the framework for the remaining eleven contributions, which are gathered under three headings.

In "The Capital in the Nation" the participants consider the distinctively different debates in the United States and Germany regarding the location of the federal capital (Kenneth R. Bowling and Ulrike Gerhard). The response to Berlin and Washington in travel literature of the past two centuries (Walter Erhart) exposes Berlin initially as a sandy, depressing waste, rather than as Mayor Wowereit's "sexy" city, and Washington as "the saddest place on the American continent"(62). A fundamental difference in the symbolic authority of the two cities emerged in their nineteenth-century roles as time-keeping and geographic centers (Martin H. Geyer), and the position of the two capitals in a networked world (Carl Abbott) is summarized in the formula: "Washington radiates influence. Berlin absorbs ideas" (124).

The section "Architecture, Memory, Space" begins with an essay on monumental architecture in Nazi-Era Berlin (Dietmar Schirmer), which contrasts the "stripped classicism" of Nazi architectural megalomania - which, since most of the grandiose designs were never executed, resembles those fanciful encyclopedias of "Imaginary Places" - with that of Washington, which was originally meant to remind American citizens of their model in Republican Rome. The lengthiest contribution in the volume, on Holocaust architecture in Washington and Berlin, begins with thoughts on the problematics of creating a symbol of Holocaust atonement in a nation with a Holocaust guilt complex and then, following a severe (and justified) critique of Peter Eisenmann's Memorial to the Murdered Jews in central Berlin, discusses Daniel Libeskind's Jewish Museum as the fitting counterpart to James Ingo Freed's Holocaust Memorial Museum in Washington (Janet Ward). A view of "capital gardens" (Christoph Mauch) compares the Tiergarten, as an integral part of Berlin, with the Washington Mall, which "denies the city as it represents the nation" (209).

The last piece in the preceding section - on socialism on display in East Berlin (Brian Ladd) - actually fits more tidily into the final section, "Political Power and Capital Functions." Focusing on the GDR efforts to project its image through urban planning and monuments, it parallels the chapter on Washington under Federal rule (Alan H. Lessoff), which surveys the development of the capital from 1878, when home rule was abolished and the city placed under Congressional supervision, until 1946, when the Legislative Reorganization Act laid the groundwork for the eventual restoration of self-government. The last two papers consider Berlin and Washington as sites of popular protest, a topological projection of Habermas's "public sphere" (286). An overview of the "Culture of Conflict" in Berlin (Belinda Davis) moves from the revolutionary activities in 1830 and 1848 by way of the socialist protests of the early twentieth century down to East Berlin in 1953 and West Berlin in the 1960s. The final paper reviews marches on Washington from Coxey's Army of unemployed men and the 1913 Suffrage Parade by way of the Bonus March of war veterans in 1932 and the 1939 NAACP concert by Marian Anderson down to the civil rights march of 1963 and the Million Man March of the 1990s.

All twelve of these well-informed and well-written essays, which display little overlap or duplication, can be read with Horatian pleasure and benefit. By stimulating the reader to think further along the lines laid out they also raise wishes and questions. The ironic responses of Berliners (211) to their Tiergarten might well have included the grotesque scene in Alfred Döblin's novel November 1918 in which the statues of German rulers on the Siegesallee climb down from their pedestals and, in view of the tumultuous political situation, march out of the city. The discussion of protests in Berlin might have begun not in 1830 but in 1806, when the mayor famously proclaimed "Ruhe ist die erste Bürgerpflicht." (In general, although the title suggests a starting date of 1800, the essays contain very little early history.) Surely the account of marches on Washington should have mentioned the acclaimed (by Norman Mailer, Robert Lowell, and others) 1967 March on the Pentagon. The discussion of Libeskind's Jüdisches Museum quotes the architect as remarking that he wanted to compensate for the "erasure of [Jewish] history" in Berlin (188) but fails to note the irony of the fact that his museum actually "erased" Berlin history by reducing the Berlin Museum, one of the few remaining eighteenth-century buildings in the city, to a garderobe and administrative facility and causing the dispersal of that unique museum's holdings to storage or to such other venues as the Märkisches Museum.

Above all, the thoughtful reader is struck by a number of missed opportunities. It is easy to imagine a chapter on the train stations of the two cities: Berlin looks East and West while Washington links North and South; one emerges from Union Station to peer up toward the dome of the Capitol while the traveler arriving at the Hauptbahnhof gazes out toward the modernistic Kanzleramt. If the Mall is "the largest museum complex in America" (215), surely it cries out for comparison with the Museumsinsel. As for spaces of memory, what about the different values expressed by Arlington National Cemetery and such examples of Berlin's 254 cemeteries as, say, the Dorotheenstädtischer Friedhof (with Hegel, Fichte, Brecht along with many other intellectuals and writers). What does the Kennedy Center tell us in the context of Berlin's three operas and the Philharmonie? What is the influence of the Washington newspapers, weeklies, and TV stations in comparison with those in Berlin? Why can Washington boast so few writers in its history - apart from occasional stays by Henry Adams, Walt Whitman, Gore Vidal, and a few others - while Berlin has been a center of German literary life from the mid-eighteenth century to the present? Finally, why does a volume on Berlin culture have no mention of Wilhelm von Humboldt and the university he founded in 1810, which became a model for most American universities including George Washington University?

These remarks are intended not as criticism of an instructive and provocative volume but, rather, as encouragement to the German Historical Institute to mount yet further conferences to mine the rich cultural terrains of Washington and Berlin.