Ross King: The Judgement of Paris 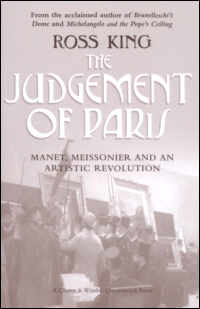 This very well written story of the mid 19th century Paris art world, focuses on Manet, denigrated in his time but a superstar in the 20th century and Meissonier, one of the most famous artists of his time, and now forgotten. The chapters alternate between the artists in a contrapuntal fashion as King recounts the vagaries of taste and the rise and fall of reputations through vivid anecdotes which bring the characters and institutions to life as in a novel. The story begins with the 1863 Salon when rule changes unfair to artists provoked Meissonier to lead a boycott which resulted in the Salon des Refusées, with the support of Louis Napoleon.

The artists are deftly placed in the context of politics at large and art politics, such as the art institutions, particularly the Salons, their juries and their place in advancing an artist's career. The impact of politics on artistic life is richly recounted. King presents the critics of the time, Baudelaire, Gautier, Zola, the sides they took, the arguments they made, and their influence on shifting taste, in what Thoré called the battle between "finishers" and "sketchers", between "conservatives and innovators, tradition and originality." (91)

A vivid sense of life in Paris is evoked, from studio practice to critical reception, World's Fairs to café life. King balances historical and cultural context with description of individual works, and character development. The roles played by Courbet, Monet, and others are woven through the narrative. Manet's friendship with Berthe Morisot leads to a discussion of women's places in the art world. As King is not beholden to art historical fashion, he writes without jargon or reference to theory but rather conveys encounters, conflicts, aspirations, disappointments, and achievements.

While Meissonier had been popular for his smaller paintings of genre scenes, his critical fate was ultimately tied to large, meticulously executed, highly detailed, well researched history paintings. King notes that though his paintings were hardly propaganda, they were part of "the large history machine." Meissonier was fascinated by Napoleon, "his courage in the face of staggering adversity." (11) Manet, 17 years younger, born to a powerful family, was part of the emerging Paris, wary of acceptance of old standards, and ultimately revolutionary in its approach to art and its values, Manet was dubbed "the Apostle of Ugliness," for his Olympia of 1865, which offended both the public and critics, aesthetically, for its flatness and unmodulated tones, and morally, for its depiction of a prostitute, though the image is based on Titian and with possible reference to Goya. King discusses the critical reception against the background of the number and circumstances of prostitutes in Paris and the efforts to quell the spread of pornography. The book dramatizes in high detail the shifting fortune of these two artists seen also as a microcosm of larger developments.

The Salon of 1868 marks a turning point when the jury structure shifted and new artists had a greater voice. Meissonier, who had been perceived as the leading artist in Europe, was selected only as an alternate. Enraged, he withdrew his paintings from the Salon. In that same year, Manet had two works accepted, one of which was favorably reviewed. Meissonier's work was now regarded as cold blooded, lacking in spirit and imagination. While initially critical of the academy and liberal in his political views, he became increasingly obsessed with artistic grandeur.

The artists' works are set against succinct and dramatic recounting of political, historical and social developments. King gives a vivid description of the Franco-Prussian War, the Battle of Sedan, the terrible defeat of the French, the Siege of Paris, the starvation and suffering, the inglorious end to Second Empire of Napoleon III, the Commune, and the declaration of the Third Republic. Both artists enlist and Meissonier become Manet's commanding officer during the Siege. They are not known to have discussed art or become friends.

With the end of Monarchy, the world Meissonier painted had passed. He thought French society in need of moral and patriotic regeneration: he had become an aesthetic conservative. By contrast, Manet's few history paintings were commemorative of failed policy and disaster, especially in his various versions of The Execution of Maximillean.

In 1872 the dealer Durand - Ruel bought all of the paintings in Manet's studio. That year he submitted to the Salon a canvas painted in 1864 which he probably thought topical, the Battle of the USS "Kearsage" and the C.S.S. "Alabama". They were a success, praised by former critics. The next year, his Bon Bock, based on Frans Hals, became the most popular painting in the Salon.

Meissonier's grand painting on which he had been working for some eight years, a detailed depiction of the 1807, Battle of Friedland, was criticized by the critic and historian Houssaye, as defective in both historical knowledge and military tactics - devastating for the painter who was committed to absolute fidelity to history and who took great pains to research every aspect.

In 1874 was the first exhibition of a group of independent artists, who one critic called "pioneers of the painting of the future." Though Manet chose to continue to show at the Salon rather than with Monet, Pissarro, Renoir and other friends, the critics saw the connection and dubbed them "disciples of M.Manet." The negative reception to his The Railway led to Manet's further feeling of solidarity with Monet, whom visits regularly in Argenteuil and begins to paint en plein air.

In the Epilogue, King traces the critical fate of the two artists. In 1882 Manet showed A Bar at the Folies-Bergère, his best work, in his final Salon. He was disillusioned and bewildered by the negative public reaction. Seriously ill with syphilis when he finished the painting, his leg was amputated and he died 2 weeks later at age 51, 20 years to the day after the Déjeuneur sur l'Herve was first shown at Salon des Refusées. The painting did not enter the Louvre until 1907 and the Dejeuner sur l'herbe in 1934. King traces the increase in value of Manet's work in the 20th century to the $26.4 million paid by Getty museum for Rue Mosnier with Flags.

In 1889 Meissonier was the first artist ever to receive the Grand Cross, the highest order of the Legion of Honor. He died in 1891 just short of his 76th birthday, while his reputation was still intact and unsurpassed in official circles. But in two generations, King recounts, Meissoner went from being the most revered painter in Europe to one who caused such embarrassment to the French establishment that in 1964 a statue of him was removed from the Louvre and another statue of him melted down for scrap.

So in the end, it was a struggle between the "votaries of the past and those of la vie moderne" of "rival ways of painting and of seeing the world." (372)

King writes that it is ironic that Meissonier's earlier paintings of cavaliers being served drinks in a country tavern spoke to 19th century Parisians "in the same language of gentle nostalgia ... the same consoling visions of the past" as Monet's woman with umbrella in a field of poppies or Manet's barmaid speaks to museum goers today.