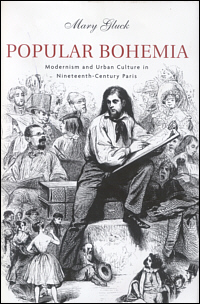 Mary Gluck presents a challenging revision of modernism in relationship to popular culture and the shifting role of the Bohemian in art both high and low. She studies the complicated relationship between the modern artist as a public figure and commercial mass culture with which he engages in a complex dance, set against the repressive culture of the bourgeoisie. There are 41 illustrations in the 187 pages of actual text.

In Chapter One, "The Historical Bohemian and the Discourse of Modernism", the origins of modernism are presented as an integral part of popular culture, the scope of Gluck's study includes some literature, theater, cabaret, and caricature. Her concern is the relationship between modern art, modernity, and modern experience. She refers to Richard Terdiman's idea of "counter discourses" which she extends in her idea of "parodic recontextualization" (21) in "a historical archeology of popular bohemia" (23). Another model is Marshall Berman's "modernism in the street" or "low modernism" which is open to the influences of everyday life as experienced in the city. And she refers to Walter Benjamin, who explored, through his study of Baudelaire, "the intimate links between the artist of modernity and the disorderly urban milieu of the bohème" (8).

A distinction is drawn by Gluck between sentimental bohemians (Murger) and ironic bohemia (Baudelaire and Gautier), both forming an alternative to bourgeois norms of respectability and conformism. "Ironic bohemia was constructed out of an ongoing parodic dialogue with popular mass culture," rescuing the culture of everyday modernity and transforming it into "enduring aesthetic forms that have come to define modernist culture" (21). She agrees with Adorno that "From its beginning, the artistic avant-garde has discovered, renewed, or reinvented itself by identifying with marginal, "non-artistic" forms of expressivity and display..." (3).

In Chapter 2, "The Romantic Bohemian and the Performance of Melodrama", Gluck argues that the concept of theater is central to the formation of bohemian culture. Hugo's "Battle of Hernani", first performed in 1830, marks the first appearance of the bohemian as a pubic figure of general relevance in French cultural life and influenced his romantic and heroic image of himself (25). During that decade there was a "dramatic transformation of cultural production and consumption" (37). Popular literary forms emerged that appealed to larger and more diverse audience.

Gluck sees in popular melodrama the first site for the alliance between radical artists and popular culture, which she argues become "the hallmark of all avant-garde aesthetics of the modern period" (47), up until the 1840s, meeting the new public taste for excitement and spectacle. "Its formulaic conventions" (46) were a point of surety in an unstabilized world. Comédie Vaudeville, which Gluck analyzes in detail, takes the place of melodrama.

In Chapter 3, "The Flaneur and the Phantasmagoria of the Modern City", there is scant discussion of actual historical developments that might have had an impact on the flaneur/bohemian. Issues of demographic change and displacement with the Haussmannization of Paris do not enter her argument, though they have an impact on the society of the spectacle. She regards the avant-garde as essentially autonomous.

Gluck discusses the association of the bohemians of the 1830s with the image of the flaneur of the 1840s, the extrovert turned dandy-spectator, anonymous in his appearance and "associated with the world of the novel and urban realism". In reviewing the popular illustrated books about social stereotypes, particularly, the flaneur, and widely read "leading humor magazines" she refers to La Caricature, a newspaper that went out of print in 1834, and Le Charivari, a daily satirical newspaper with caricatures (85). Daumier's series featuring Robert Macaire, Caricaturana, was not published in 1841 but in 1836. The date is significant as the caricatures are, in good part, a response to the censorship laws of September 1835 and the incorporation of political caricature into social satire, here a critique of capitalism, which is not mentioned.

Daumier's caricatures "Ancient History" (1841-43) are discussed as a series "that exposed the underside of contemporary visions of modernity" (85), referring to the bourgeois inability to generate cultural traditions of their own and their anxiety about modernity. But there are many other caricatures of Daumier that would better make the case regarding attitudes toward modernity. The overall lack of Detail catalogue numbers for the Daumier lithographs is unfortunate.

Gluck reviews the popular literature on types and manners and the role of Balzac's La Comédie humaine (93) which aspired to produce a comprehensive and epic picture of modern life. Realism, in the period 1846-1851, according to Gluck, replaced this ambition with "the exact imitation of nature; the exclusion of the artist's personal point of view" and modernity came to be "exclusively associated with a decontexualized and abstract science" (96). Zola, the premier Realist writer, is curiously omitted from her analysis. Courbet and Daumier, the two leading Realist artists, both of whom were politically engaged, did not presume to be objective: they both asserted their point of view. Gluck's conclusion based on an analysis of a caricature of Daumier that urban observation "was replaced by a mechanical idea of visuality, which excluded imagination and subjectivity as valid categories of perception" (97) is not true either of Daumier nor of the artists associated with Naturalism and Impressionism who began to emerge in the late 1850s, such as Manet and Degas.

Gluck asserts that "The Realist consciously avoided the fleeting and superficial aspects of modern life in the city" (97) but it was Daumier who developed a drawing style to capture the fleeting moment and his subject was often contemporary urbanism. Baudelaire's characterization in "The Painter of Modern Life", 1858, of the artist who captures "the ephemeral, the fugitive, the contingent", is cited rather in the context of the rise of popular commercial culture (101). The discussion of the bohemian is not further developed in this chapter. Nevertheless, Gluck's overall conceptualizations of the issues of modernity are based on extensive research and close readings, and she has valuable insights throughout.

Gluck also situates the changing definition of the bohemian in literary reference, most notably in Husymans' A Rebours (Against the Grain), published in 1884. She also provides a rich discussion of artistic cabaret performances, such as the Chat Noir and the Society of the Hydropathes. In Chapter 4, "The Decadent and the Culture of Hysteria", Gluck explores the connection between decadence and bohemia, exemplified by Huysmans, Mallarmé, Verlaine and others. The decadent described as "an alienated figure detached from his society and his century", contributed to the process of "decontextualization". The hysteric influences the performances in Cabarets (109).

"The original decadent was a parodic and transgressive figure", closely affiliated with urban spectacle and performance, making him the heir of the flaneur of the 1840s and the bohemian of the 1830s, who was also engaged in the task of "formulating an explicitly popular and performative vision of modernity" (110). The bohemian performances of the 1880s included the so- called Incoherent art exhibitions and costume balls. "Bohemia made legible and visible the secrets and hidden characteristics of what it meant to be modern." (119)

Gluck criticizes the Impressionists, who in the 1870s painted "essential utopian visions of bourgeois culture rather than its unvarnished expression" referring to the critique of Philip Nord. There is no acknowledgement here of the work of Degas, Manet and Toulouse-Lautrec who did indeed paint the "unvarnished". Gluck contrasts the Impressionists with "spontaneous experience and direct communication" of the carnivalesque performances of the fin- de- siècle bohemian (121).

Gluck takes issue with TJ Clark and other Marxist oriented critics for their "inadvertent reductionism and its disregard of the autonomous function of culture in the modern world" (125). This is a central tenet of her book. For Gluck, the goal of bohemian cultural practices was not to bring about institutional change but to transform perceptions toward existing realities. Bohemians are concerned, as Raymond Williams has phrased it, with "structure of feeling" characteristic of contemporary life (125).

One lesser known movement Gluck elucidates, is Fumisme, which referred to "subversive, carnivalesque aspects of bohemia", and involved practical jokes and provocations of authorities and establishments. Their practices were associated, according to the actor Coquelin the younger, with "emotional excess, psychological instability and physical delirium that unmistakably reproduced the symptoms of hysteria" (130). This leads Gluck to a lengthy discussion of the "centrality of hysteria" to the cultural life of fin-de-siècle France, with a review of some of the recent literature. She reports at length about the activities of the psychiatrist Jean-Martin Charcot, director of the Salpetrière, and his demonstration sessions with hysterical patients. She notes that "What was ultimately at stake in the theatrical spectacles of bohemia and the Salpetrière was the ambition to reaffirm the transparency and legibility of the modern world through the interpretative activities of the artist" (148).

In "The Primitivist Artist and the Discourse of Exoticism", chapter 5, Gluck discusses Gauguin and the Primitivists "as a direct line of succession from the flaneurs and decadents who inhabited the spaces of popular bohemia before them". She refers to James Clifford, but warns that the relation between the avant-garde, the Primitive and popular exoticism, may not be as direct as he suggests (175).

For Gluck, bohemia is characterized by its acceptance of the flux and contingency of modern life. "Far from declining in the 20th century, this ironic bohemia, with its complex strategies of parody and aesthetic doubling, has become the dominant formula for personal freedom and artistic creativity in the modern world." (187)

Mary Gluck's study of bohemia over four periods, offers a challenging discussion of some avant-garde movements in urban 19th century Paris and the ways they inform our notion of the Bohemian in the context of modernity and modernism. The book is well written and worthwhile for its information and insights on a set of fascinating issues. Gluck reveals many often overlooked aspects of the period and discusses them, in part, through the lens of critical theory rather than sociologically. Popular Bohemia is a significant contribution to the study of the early modern period in France.