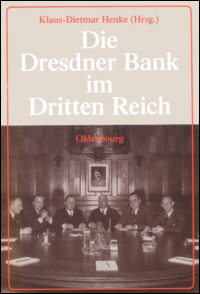 Territorial expansion through conquest and eventual annexation as well as military occupation and the exercise of hegemony are not just political and military, but also social, economic, and financial processes. In scholarship on German-occupied Europe in World War II, the financial side of domination was relatively neglected until the mid-1990s, after which a range of archivally based studies of financial institutions appeared, often commissioned by the banks themselves. They tell us very clearly that bankers were essential players in virtually every aspect of the implementation of National Socialist policies of expansion, plunder, and racism in "New Order" Europe. They also tell us that the bankers were generally willing to be of assistance to the Nazi regime in this regard. What Harald Wixforth and his co-writers tell us (among other things) in this very large and very rich volume is that the financial officers of the Dresdner Bank and its affiliates were much more willing than most.

The volume is arranged geographically by areas where National Socialist Germany expanded or exercised hegemonial influence starting in 1938. About three-fourths of the coverage is devoted to central, eastern, and south eastern Europe, the remainder to western Europe. It starts with Dieter Ziegler's short contribution on the "peaceful" expansion of the regime and the bank into Austria. Like the rest of the book, this is richly documented from archival sources, but also draws much more heavily than other chapters on research work done by the historical commissions of the Austrian Republic and the Bank Austria-Creditanstalt.

What is striking, first of all, is the preparation by the bank for eventual expansion of its pre-"Anschluss" activities in Austria. Once in situ, the Dresdner Bank incorporated its associated bank into the concern and, on the basis of careful cultivation of those in power, expanded its business considerably, to the detriment of its rivals. Growth of business in "traditional" areas such as industrial finance, real estate, and so on was gradually supplemented by non-traditional activity in financing construction of an apparatus for German domination and also enabling implementation of racial policy (through "Aryanisation" and confiscation and sale of Jewish property). Ziegler's claim, reiterated in the conclusion of the volume, is that Austrian patterns of behaviour by the Dresdner Bank and its employees was a model for activities in other areas. (54, 879)

Certainly that was true for the bank's participation in the carving up, reorganisation, and partial "Germanisation" of the next target of Nazi German aggression, Czechoslovakia, which Wixforth (interspersed with passages by Jörg Osterloh) covers in great detail in three main sections (over two chapters) on the Sudetenland, the Protectorate of Bohemia and Moravia, and Slovakia. The same combination of forward planning, acquisition/affiliation of partners on site, cultivation of relationships with those in power, and making money through traditional and non-traditional means characterised the Dresdner Bank's modus operandi here.

But in some ways, the complexities of behaviour in individual situations also become particularly apparent in these chapters, which makes the authors' idea of Austria as a model problematic. After all, the three "pieces" of the former Czechoslovakia represented completely different legal forms of government and domination, with one part, like Austria, incorporated politically into the Reich, another ruled by a German-led viceroy regime, and the third a "vassal state" of Germany. Each offered different challenges and opportunities to the Dresdner's entrepreneurial bankers. In the "vassal state" Slovakia, for instance, the bank (along with other firms and even the German regime itself) had to make many more compromises, with the Slovaks exercising some - albeit limited - freedom of manoeuvre in pursuing their own interests. In the Protectorate, on the other hand, spurred on by perceived business opportunities and a keen desire to please the protectorate's bureaucracy, combined with an apparently complete lack of moral compunction, the Dresdner engineered new departures from "normal" banking practice to supplement previous activities in support of "Aryanisation". Its bankers cooperated with the SS in arranging finance for its various activities, for instance, serving in general as "'Finanzdienstleister' für den Herrschaftsapparat im Protektorat". (381)

It was in Poland, however, that barbarisation of banking practice at the Dresdner Bank took on its most horrendous forms, and the chapter is suitably long and detailed in depicting the unfolding of this. Wixforth is very clear here: The Kommerzialbank was the most extreme of all the Dresdner Bank affiliates in its embrace of "non-normal" banking and credit practices. Its bankers did not increase business and profit through traditional channels such as industrial financing, but rather through cooperation with and financing of the apparatus of hegemony, in particular in relation to the radical implementation of racial policy in the Final Solution. And they did so with gusto. (577-8)

Much less space is devoted to the "Ostland", the Ukraine, and the Balkans, mainly because the Dresdner was often thwarted in these areas by its rival, the Deutsche Bank. However, a substantial part of the volume, written by Johannes Bähr and Friederike Sattler, analyses the Dresdner's activities in western Europe, especially Belgium, the Netherlands, and France. Compared to the way the institution's bankers behaved in the east and south, those operating in the west engaged primarily in "normal" banking practice, although there were plenty of "non-normal" activities as well, especially in relation to "Aryanisation" in Belgium and the Netherlands. Here, France was an exception, although even here there was a major case of participation in racially prompted financial transactions.

Wixforth and his co-writers are to be congratulated for a major achievement in compiling, analysing, and presenting a raft of information from a wide variety of archival sources over the course of a lengthy, but also cogent and well organised volume. The length unfortunately means that few beyond specialists will read this book in its entirety, let alone the full four-volume set of which it forms a part. But its empirical richness will serve specialists on business and banking in German-occupied Europe well, and the more general reader may be pleased at the relatively short and extremely informative introduction and conclusion.

What neither the specialist nor the general reader will find, however, is an indication of the "de-expansionist" planning and practice of the bank and its employees as the on-going war pointed more and more clearly to German defeat. This is unfortunate, since one of the volume's strengths, in addition to its coverage of the results of annexation and war, is its depiction of pre-annexation (in the case of Austria and Czechoslovakia) and, to a lesser degree, prewar planning and preparation by the bank. Still, the accomplishment here is impressive, and the volume will be vital for current and future business and banking historians of the 'Third Reich'.