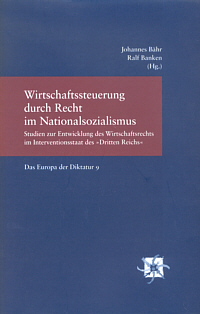 Economic historians of the National Socialist period seldom deal explicitly or at length with issues relating to economic and business law, while legal historians of the period rarely deal directly or at length with business or the economy. Yet, broad and influential interpretations make implicit or explicit assumptions about the relationship between the two. For example, if the National Socialist period was characterised by the "primacy of politics", at least after 1936, the institutions of business and the economy - including those relating to the legal framework within which the economy functioned - must have ceased being effective. On the other hand, Ernst Fraenkel's notion of the "Third Reich" as a "dual state" in which the rule of law largely ceased to exist except in relation to the economy and business would suggest a completely different interpretation. In this book, economic and legal historians investigate a series of case studies and themes at the intersection of their sub-fields, in the process deepening our knowledge of the relationship between them. The results are as fascinating as they are nuanced.

The editors themselves provide more than half of the total text here, including two substantive articles each, a jointly authored introduction and an edition of a document by Banken. In these and in many of the other articles in this collection, law, regulation and controls relating to the economy under National Socialism are subject to detailed analysis, rigorous contextualisation and therefore careful differentiation. So, for instance, in Margrit Seckelmann's analysis of patent law in the period, the National Socialist introduction of the "inventor principle" in 1936 was part of a long-standing debate and trend both within Germany and internationally towards unification and standardisation of patent law. It was a story therefore that was neither exclusively German nor exclusively National Socialist.

The same is true for a number of other important cases relating to legal theory and practice in relation to the economy under National Socialism. Bähr's consideration of the law on joint-stock corporations (Aktiengesetz) of 1937 and Bernhard Stier's contribution on the energy law (Energiewirtschaftsgesetz) of 1935 also view legislation which emerged in the National Socialist period as not particularly "National Socialist", but rather the culmination of long-term trends in Germany and in other industrialised countries. True, the Aktiengesetz may have been hailed by National Socialist legal theorists of the time (and interpreted by many historians since then) as profoundly ideological, but Bähr argues convincingly that it was not, and that the inclusion of such language as the designation "Führer der Aktiengesellschaft" in the law was "eher von semantischer Bedeutung" (50). Here, as in the case of patent law, it was possible to continue to deploy National Socialist-era legislation in the Federal Republic of Germany once terminology was altered somewhat, precisely because NS ideology did not in any serious way affect its fundamental content.

But this is not to say that business and economic law was untouched by National Socialist policy and practice. Indeed, the editors put forth the overarching hypothesis for the studies put forward here "dass Recht ein wirksames Steurungsmedium der NS-Diktatur war" (5). But, again, careful distinctions are in order. Comparing the Aktiengesetz with legislation on deployment of profits and payment of dividends (Anleihestockgesetz), for instance, Bähr notes that the latter represented a level of intervention in the market of dimensions that were "vor 1933 nicht denkbar" (57). But even this was not "ideological" per se, but rather a means of facilitating financing for state programmes. Other legislation and regulations were not explicitly ideological in form or function - for example, controls on foreign exchange transactions were imposed not only by the National Socialists, but also by the Weimar and Federal Republic governments. But the way foreign exchange was dealt with legally under the National Socialists had some explicit and effective ideological aspects. In the rare case when law and regulation were explicitly "ideologised", as in the case of legislation relating to agrarian and settlement policy detailed by Uwe Mai, the regime failed to achieve its goals owing to unwillingness to break fully with existing legal frameworks within Germany itself and the futility of trying simultaneously to realise the objectives of racial purity, economic success and rise in population.

Insofar as the contributions in the book explore these themes - which is certainly true in sections one through four in particular -, the volume remains well focused and superbly coherent. The final two sections, one involving two essays on the history of ideas and one introducing an edition of a document relating to economic policy discussions within the National Socialist party from February and March 1931, are extraordinarily interesting. Bähr's telling of the story of the ways in which traditional scholars in business law and the minority Freiburg school academics interacted with one another and with the regime is well told, for instance, while Jan-Otmar Hesse's study of the semantics of regulatory order and competition in certain economics textbooks in the National Socialist period is certainly fascinating as well. The discovery of a document which indicates an astonishingly high level of participation by Adolf Hitler in early discussions on economic policy is cause for publication and analysis, too. But just how they relate closely to the overall topic of the book and to the previous essays is not clearly articulated.

Still, this is a fine collection, a work of deep and truly interdisciplinary scholarship. It situates a key but largely neglected topic within debates about the nature of the National Socialist regime, its relationship to German history before 1933 and after 1945 and Germany's place in the context of international economic and legal development during the 20th century.