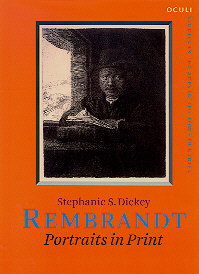 Rembrandt etched approximately seventeen portraits whose sitters have been plausibly identified. Dickey's study concentrates on these plus three of his more elaborate self-portraits. Additional plates may have been made as portraits, but the possibility remains that they were instead intended as evocative anonymous faces. The present volume grew out of Dickey's doctoral dissertation (New York University, 1994). The last extended treatment of the subject was the catalogue by R. E. O. Ekkart and E. Ornstein-van Sloten that accompanied an exhibition held at the Rembrandthuis Museum, 1986-87.

Dickey takes great pains to provide context for the portraits. She studies the lives of the sitters, assesses the artistic traditions to which the works respond, compares them to the work of Rembrandt's contemporaries, and pays close attention to the literary and poetic responses they elicited in his lifetime. Rembrandt also painted several portraits of the same sitters, and Dickey examines them closely for evidence they might provide about the etchings.

Dickey divides the portraits into two main groups based on the interests of the sitters: preachers and lovers of the visual arts. There were fifteen sitters, two of whom Rembrandt etched twice. Three of the four sitters prior to 1647 were preachers. After that date, none of the sitters was a preacher. The addition of the self-portraits allows Dickey to treat an attractive and lively subject that also allows her to explore Rembrandt's projected self-image vis-à-vis the status of his sitters. Unfortunately, Rembrandt's other self-portraits are so wide-ranging that one cannot assume that the three discussed are truly representative.

The depth of Dickey's study necessarily varies with the amount of information available about the sitters. It seems that the degree to which Rembrandt's sitters' lives are known depends primarily on the degree to which each made himself a public figure through the written or spoken word. For example, the preachers Sylvius, Anslo, and especially Uytenbogaert left behind ample documentary trails. The same can be said of the well-born man of letters and future burgomaster Jan Six. The two auctioneers from the Haringh family may have spoken in public, but the prices of objects are apparently less enduring than theological ideas and dramatic verse. Similarly, the physicians Tholinx, Bueno, and Van der Linden were men of standing in their circles, but their discussions may have been directed toward other specialists. Within the locus of Rembrandt's sitters, the notable exception to the principle that a well-documented life derives from literary activity is Rembrandt himself. We know a great deal about him not only from his art but also from notarial evidence of his unconventional social and financial activities.

Dickey sees in Rembrandt's portrait prints a mix of tradition and radical innovation. For over a century the popularity of portraiture had risen along with other expressions of the importance of individual achievement, such as biography, autobiography, and occasional poetry - that produced in response to a specific event. With regard to Rembrandt's involvement in artistic traditions, Dickey challenges the current notion that he looked primarily to Italian sources - Titian and Raphael - for the composition of his 1639 self-portrait. She finds considerable precedent in northern portraiture, extending back to Dürer and going strong in the Low Countries in the late 16th century. Undoubtedly Dickey is correct that Rembrandt was aware of the northern sources, but his omnivorous curiosity was certainly nourished by both traditions.

Rembrandt's etchings departed from the norms of printed portraiture in that nearly all were original works of art rather than reproductions of paintings. They were produced individually rather than as parts of series. Whereas most portrait prints were made using techniques that could withstand long print runs, Rembrandt's were etched with unmatched delicacy and often included extensive passages of the more fugitive drypoint technique. Instead of political and military celebrities, Rembrandt depicted less widely known men who concerned themselves primarily with matters of religion, art, and medicine. In all but two cases he omitted the identifying - often laudatory - inscriptions almost always found on portrait prints, even those intended for private distribution to the sitter's acquaintances. As if to say that his work could speak for itself and that its meaning would not be limited by any textual interpretation, Rembrandt had the unusual habit of leaving blank spaces beneath his portraits where one would normally expect to find an inscription.

A somewhat vexing issue is Rembrandt's motivation for making his etched portraits. Dickey suggests that many were gifts to the sitters, men who had been his patrons, men who could influence his patrons, and men from whom he might have hoped to gain commissions. Rembrandt's transfer of the printing plates to the sitters also accounts for the rarity of many of the prints and for occasional oddities, such as the professionally engraved inscriptions added to the Lutma plate. Dickey finds evidence for the private distribution of Rembrandt's portrait prints in the rapid publication of copies after those depicting Sylvius and Anslo. She notes that the copyists cut their plates more deeply and that the publishers further normalized the images by adding inscriptions of the sort that Rembrandt avoided. In his review of Dickey's study, Peter van der Coelen argues that the plates were simply too valuable to have been given away . [1] The truth is that we do not know. Rembrandt was capable of offering truly extraordinary gifts, including the eight-by-ten-foot painting apparently declined by Constantijn Huygens. The situation probably varied from sitter to sitter, and we simply do not have enough information to draw firm conclusions.

Dickey suggests that early critics may have admired Rembrandt but failed to appreciate his unique approach to printmaking. Citing LeComte's 1699 recommendation that collectors obtain portraits by Rembrandt along with those by Goltzius, Sadeler, Suyderhof, Nanteuil, Mellan, and Visscher, as well as reproductive works by various famous painters, she concludes that Rembrandt's etchings were grouped with commercial production. This may be less a sign that Rembrandt was unappreciated a generation after his death than an indication that modern appreciation of prints focuses so narrowly that we now undervalue the enormous talent that the above-named artists brought to their craft.

Dickey devotes considerable attention to the poetry associated with the portrait prints. She provides complete transcriptions and translations of all the verses, as well as those for several painted portraits. Two of the portraits bore verses etched or engraved directly into Rembrandt's copper plate: the preachers Sylvius (authored by Barlaeus and Scriverius) and Wtenbogaert (Grotius). Five of the prints elicited contemporary poetic response: Anslo, Coppenol (both), Six, and Sylvius. The large portrait of Coppenol elicited more than half a dozen poetic responses - the exact number cannot be determined due to the presence of two prints of the sitter; yet, the verses seem less like spontaneous outpourings than favors paid to the famous calligrapher who inscribed the words beneath his own image. Some of the other poems may refer to Rembrandt's painted portraits of the same sitters. Some are associated with Rembrandt only in that they appear with published copies of his etchings: they make reference to the sitter rather than to Rembrandt's own print. A number of the poems make use of poetic tropes meant to honor the sitter by saying that he had much more to offer than meets the eye. The importance of the poetry lies not in its commentary on Rembrandt and his work; rather, the poetry helps to define for us the intellectual milieu in which Rembrandt's portrait prints circulated.

Dickey's study is a serious and substantial contribution that provides a solid foundation for future studies of Rembrandt's portrait-making practice in all media and a model for students of other 17th-century bodies of portraiture.