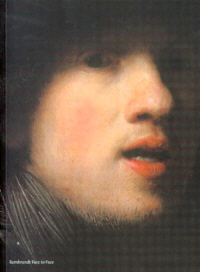 Stephanie Dickey's book Rembrandt: Face to Face is devoted to a single work of art: a self-portrait by Rembrandt van Rijn, painted around 1629, part of the Clowes Fund Collection at the Indianapolis Museum of Art. This delightful self-portrait of the young artist has recently been re-attributed to Rembrandt by the Rembrandt Research Project (RRP), and well deserves re-consideration. The picture, possibly Rembrandt's earliest painting of his head in a life-size scale, shows the artist wearing a painter's cap and a gorget, with an immediacy and rawness emphasized by the curly hair beneath the cap, the unshaved chin, and the blemished skin.

In her study, Dickey analyzes multiple facets of the Indianapolis painting, and the environment of its creation. She begins with an introduction that examines the possible influence of mirrors on the development of self-portraiture in early seventeenth-century Holland, presenting a broad analysis of the literary and pictorial influences that may have shaped this self-portrait. The first section examines the place of the painting within the pictorial genre of portraiture in the early-modern period. In the following chapter, entitled "Self-Portraits, the Market, and the Exploration of Identity," Dickey discusses the practical and technical development of the Indianapolis portrait, suggesting that the grounds for Rembrandt's choice of painting his own likeness expresses his personality as well as his artistic ambition and growing awareness of the medium's marketability. The third section, "The Clowes Painting and Its History," outlines the painting's provenance. As she summarizes the picture's history, Dickey surveys different points of view about its authenticity and the technical analysis that supports re-attribution to the master himself. In the following chapter, entitled "Portrait of the Artist by Himself," Dickey emphasizes the relationship between Rembrandt's interest in self-portraiture and the development of his workshop, which complicates the notion of attribution: it could have been made by the hand of one of his pupils.

The following chapters focus on the pictorial tradition that may have influenced Rembrandt for his 1629 self-portrait. In the fifth section, entitled "The Expressive Self-Portrait: Tracing a Tradition," Dickey proposes various portraitists who depicted their own images as possible pictorial examples for Rembrandt's vivid exploration of his own expression. Among others, the author suggests a potential line of influence from Amsterdam portraitist Nicolaes Eliaszoon Pickenoy, whose Self Portrait at Age 36 may have been an example for Rembrandt's unique posture, to other northern prototypes like Albrecht Dürer's representations of himself. In the chapter "A Distinctive Combination," the author geographically expands the pictorial influences by Flemish artists such as Anthony van Dyck and Adriaen Brouwer, whose self-portraits may have impacted the design of Rembrandt's painting. The focal point of the seventh chapter, entitled "Leiden, Amsterdam, and the Lure of Italy," is the importance of Italian art as an influence on Dutch artists such as Rembrandt's teachers (Isaac van Swanenburg and Pieter Lastman), Rembrandt's contemporary and colleague Jan Lievens, and the group of artists known as the Utrecht Caravaggists. In the final chapter of the book, entitled "Giorgione and the Artist in Armor," Dickey suggests that the Indianapolis painting has significant similarities to Giorgione's Self-Portrait as David, now in the Herzog Anton Ulrich-Museum Braunschweig. The author argues that Rembrandt's painting is similar to Giorgione's painting in scale and character. The study concludes that the animated Indianapolis painting represents a seminal self-portrait of a young artist, marked by determination and the conviction that his artistic reach would transcend the country that he had never left.

Dickey's eloquent and knowledgeable study provides a fresh opportunity to examine Rembrandt's early career. A detailed analysis of Rembrandt's self-portraiture based upon a single painting is in itself a challenge, and Dickey is careful to provide broad contexts and avoid over-mechanization. Dickey's assertion that this self-portrait provides an insight into Rembrandt's early-developed business mindset and artistic ambition is well-argued, and supports her valuation of this painting's significance. Determining pictorial sources for the presentation in seventeenth-century art is often a demanding task, and Dickey's examination of potential pictorial and literary sources does not consistently develop compelling lines of argumentation. The case for Giorgione as the main artistic inspiration for Rembrandt's pictorial solution is arguable. While Giorgione depicts himself in armor, the young Dutch artist combines an illustration of a gorget with a painter's cap. Such an association is repeatedly found in various works by Rembrandt and his Dutch contemporaries from that period. This significant artistic phenomenon is not examined in the book, and would deserve further study. Overall, though, Stephanie Dickey's book is a well-researched study of the way the young Rembrandt van Rijn may have seen himself, and may have wanted to be seen.