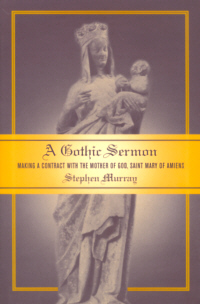 It has been over a century since John Ruskin likened the three great portals on the west façade of Amiens Cathedral - with their eschatological themes portrayed in the tympana, somber saints in the jambs, and didactic scenes in the quatrefoils below - to a sermon preached in stone. Ruskin was hardly the first to draw such a connection; the idea that images could function as equivalents of texts goes back to Pope Gregory the Great (d. 604). Nor was he the last to do so. The notion of the historiated portal as frozen verbal discourse was fundamental to the most influential interpreters of medieval iconography: Émile Mâle, for example, who presented the images in Gothic buildings as a Scholastic Speculum [1], or Adolf Katzenellenbogen, who analyzed the spatial and axial relationships among the various figures through the lens of scriptural exegesis. [2] More recently, Wilhelm Schlink used medieval philosophical writings to illuminate the peculiar non-distinctiveness of the Amiens jamb figures. [3] He suggested that what strikes modern beholders as a stylistic fault may have held significance for medieval viewers, allowing them to see in the resemblance of the Apostles to the central "Beau-Dieu" evidence of the successful assimilation of those men to Christ.

Stephen Murray's newest contribution to the literature on the portals of Amiens Cathedral, while indebted to all these authors, turns the established method of iconographic analysis on its head. Rather than "reading" the portals, with their nearly overwhelming visual complexity, as pictorial manifestations of content available elsewhere in writing, he seeks to demonstrate the dynamic interplay between the portals and spoken words - in this case, a Picard sermon preached near Amiens in the 1260s, as the cathedral was nearing completion. As the book's title slyly suggests, it is not the portals that will be revealed as a kind of sermon; rather, it is the sermon that will be read, and given meaning, through its structural and thematic likenesses to the portals. In the course of this analysis, the sermon comes to assume the formal and expressive qualities typically associated with the Gothic cathedral and its embellishments: the paradoxical fusion of order and playfulness, gravity and wit, the keen attention to a supreme, ineffable divinity and an interest in embodied, sensate humanity. [4]

For the Victorian Ruskin, the metaphorical sermon embodied by the Amiens portals was a heavy-duty thing; sober, serious, and expansive, it aimed to edify and enlighten through grave subject matter and high-flung rhetoric. For Murray, the Gothic sermon is decidedly postmodern, a dizzying hodgepodge of quotations, exempla, jokes, warnings, curses, moralizing lessons, and, above all, pleas for donations - with its quick cuts, fast pace and colorful imagery, a sermon quite well-suited to the MTV generation. At the same time, the text - published here in a facing-page translation by the author (59-141) - is utterly alienating to modern readers. Addressed to the well-to-do peasantry of the Picard countryside in the dialect they themselves spoke, it captures the voice of a master communicator who draws on time-bound quotidian references, turns of speech, and habits of thought in order to accomplish his primary goal: convincing his audience to contribute money toward the completion of the cathedral, personified as Our Lady, Notre-Dame of Amiens.

Although, in his conclusion, Murray places focus on the preacher's manipulative powers, thus splitting the pragmatic aim of the sermon (gathering money) away from its religious and devotional content (its attention to Mary as intercessor, the necessity of virtuous social behavior, the promise of heaven and the threat of hell), his foregoing commentary demonstrates the ease and thoroughness with which both seemingly incompatible sides flowed into one another. After laying out the "occasions and audience" for the sermon in Chapter One (9-12), Murray introduces us to the "structure and content" of the text (13-25), teasing out a clear thematic structure underlying the seemingly disjointed details. This structure, he shows, is built upon the theme of contract - the reciprocal, active obligations linking ordinary sinners with the divine. Through vivid evocations of physical pain - both the lofty sufferings of the martyrs and of Christ and the debased sufferings of the sinful in purgatory or hell -, punctuated by direct addresses to his "good gentlefolk", the preacher heightens his listeners' awareness of their own guilt before extending the promise of redemption through their acts, especially those performed in honor of God, his Mother, and their local representatives, the Amiens bishop and clergy. Much attention has been paid to the changing image of the Virgin in the twelfth and thirteenth centuries, as she assumed a humanized role as mother, sweetheart, and advocate. The sermon offers insights into another important role she played in the minds of ordinary business-minded folk: that of contract-maker, offering the chance of redemption in return for obedience and money given to the church and even, through her clerical spokesmen, negating any other worldly contracts that might prevent such expenditures from being made.

The presentation of what we often call "devotional practices" in terms of pragmatic exchanges points not only to the kind of cynicism noted in Murray's conclusion, but also to the preacher's keen awareness of his audience's interests, concerns and ways of thinking, and his wish to communicate with them in an optimally effective way. Chapter Three (26-32) deals with other such "rhetorical strategies", strategies familiar to students of high medieval sermons and exceptionally well-illustrated in this case: direct address, self-deprecation, the sprinkling-in of Latin quotations, sudden interjections and curse words, exempla from daily life, jokes, an often rhythmic syntax, and a vocabulary that draws heavily on visual and material experience.

The relation of the sermon to visual media forms the subject of Chapter Four, "Portals and Preaching" (33-47), as Murray turns to the portals themselves. Here the author is treading a delicate tightrope, and he is careful to avoid assigning priority to either text or image, to suggest that one exercised any influence on the other; rather, as Wolfgang Kemp has done in his study of Gothic stained glass, he uses each medium to illuminate our understanding of the other. [5] Beginning with the formal structure of the ensemble, Murray explains how the almost identically posed trumeau figures of Christ in the center portal, St. Firmin in the north, and the Virgin in the south participate in a "rigorous system of visual cross-reference" (35), allowing viewers to perceive immediately the typological links between God, Mary, and bishop that the preacher worked so hard to define. Emphasizing the "interactive" nature of the "image clusters" in each doorway (37), which allowed viewers to extract different emphases with each new viewing, Murray identifies the intersections of the iconography with the sermon's major themes: "judgment and redemption through transformative emulation" in the center portal (37); "the power of the church" in the north portal (41); and the salvific role of the Virgin Mary, patron of the cathedral, in the south.

The mechanics of this connection are left undefined; Murray makes no claims for the patron's intentions, but rather places emphasis on the mental habits of contemporary audiences. The text-image nexus, he suggests, lay not in the material world but in the memories of his thirteenth-century listeners, who would have observed the cathedral's doorways with the preacher's words resonating in their minds, and in the memories of viewers, whose apprehension of the sermon would have been mediated by their prior visual experience of the portals. Assuming the sermon was retired after the building was completed, this leaves us with a rather small community who could have understood these works the way Murray does. Moreover, the meandering sermon itself, whose surface details are anything but precise and orderly, does much to complicate the neat patterns and analogies he has set forth. The underlying structural elements may be closely related - one would be hard-pressed to find either a sermon or a portal program from this period that did not address the themes enumerated here -, but the primary sources themselves, the long text and the massive portals (reproduced here in sadly small-scale, black-and-white images), confront us with a wealth of details that cannot be harnessed into a single unified schema. If each medium can shed some light on the other, each also, in the end, exceeds the other, inviting further, and deeper, exploration.