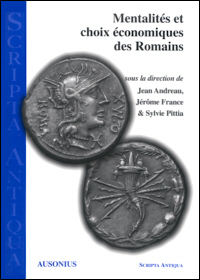 In 1995 a research group was brought together for a project entitled "Fonctionnement des systèmes économiques et sociaux dans le monde romain et hellénistique". They worked on a corpus of literary, epigraphic and juridical texts and studied decision-making processes in the private economy of Rome. They have established different aspects or objects: mechanisms of the decision-making process, documentary sources and the questions they raise, motives which lead to a decision as well as financial interests and, finally, the way in which the decision is taken and executed. This book presents the results of that research.

The book consists of three parts: "Prise de décisions et grandes stratégies économies", "Études de comportements économiques" and "Notions économiques antiques et modernes". In her article "L'influence des liens de parenté sur la prise de décision économique: le cas des Tullii Cicerones" (21-44) Sylvie Pittia studies the correspondence between Cicero and his brother Quintus, thus presenting a case study of relatives administering aristocratic property. The two brothers helped each other when the circumstances of their lives required it. Marcus was perhaps not a financial expert, but he was interested in administering property and gave advice. The article by Monique Dondin-Payre, "La prise de décision économique privée d'après les biographies" (45-70), analyzes a literary corpus: biographies of Valerius Maximus and Cornelius Nepos. This material allows us to investigate the interactions between public life and the administration of private property. She introduces extensive source citations, from 35 texts all together, both in French and Latin. Jean Andreau ("Sur le choix économiques des notables Romains, 70-85) presents Roman society as a diversified one, in which not all social milieus shared the same economic activity or the same strategy. However, most of the extant evidence is on imperial elites and municipal nobles. Andreau argues that Roman nobles had a choice between two grand economic strategies and distinguishes archaic and modern aspects. He examines literary and juridical texts and proposes five categories of revenue sources: land property (agriculture and farming, trading in agricultural products, breeding of animals relevant to agriculture), other economic activities not related to agriculture (money loans, land leases, production and commercial activities, revenues from slave work employed in that sector), political or military life, cultural or legal activities, administration of heritage (including matrimonial strategy). He also gives three probable types of attitude: a very high level of activity leading to enrichment with maximum engagement (important public figures by the end of the Republic), a passive strategy (Plutarch), and something in between, a careful strategy, aware of the necessity of revenues (Cato, Varro and Columella). In her article on "Le code de l'honneur des paiements. Créanciers et débiteurs a la fin de la République romaine" (88-107) Marina Ioannatou studies debts and loans contracted among the elite. The honor code of repayments established a desire to present oneself as liberalis, owner of capital de gratia. The question raised was: Is it legitimate to suppose that a generous man will renounce his right to collect a debt in exchange for a family and friendship liaison with his debtor? The real honor code observed was: the creditor found an equilibrium between his financial interest and respect for social norms in exchange for the debtor's loyalty.

The second part of the book consists of four articles. The first one is by Jean Andreau, "Les esclaves 'hommes d'affaires' et la gestion des ateliers et commerces" (111-126). Studying the role of slaves in production and trade, he points out the difference between the system of savings and planning. Andreau also presents the opinion of A. di Porto on servus communis and servus vicarius and introduces some new elements, presenting a milieu of slave entrepreneurs. The economic relation between a slave and his master is not univocal. The importance of savings and planning are beyond doubt, they also contributed to the liveliness of economic activity. Jean-Jacques Aubert's contribution ("De l'usage de l'écriture dans le gestion d'entreprise a l'epoque romaine", 127-147) deals with the use of writing in the administration of Roman enterprises. The significance of writing is obvious considering the modalities of making contracts. The variety of sources is impressive (iconographic, literary, juridical, epigraphic and especially papyrological for correspondence and inventories). Aubert uses the term "craftsman's literacy" to refer to a society in which the majority of craftsmen were able to read and write. Social elites are the subject of the next two articles. In his article "Les monuments funéraires et le "capitalisme" des élites trévires" (149-178) Jérôme France studies funerary art in Gaul, a documentary corpus from Trévires (7 monuments). Two themes can be identified: "cycle des laifundia" and "cycle des negotia". In this way he reveals the existence of a self-confident and culturally autonomous group whose wealth came from negotia and not land. Every monument is described in detail and accompanied by ten black and white figures. The subject of Koenraad Verboven's contribution ("Mentalité et commerce. Le cas des negotiatores et de ceux qui negotia habent: une enquête préliminaire", 179-197) is mentality in economic decision-making. The on-going debate is still dominated by Max Weber's thesis that mentality is the key to long-term economic success. Verboven argues that the culture and mentality of business elites was not sufficiently taken into consideration and his aim is to reconsider the issue. He presents different conceptions and value judgments concerning risk management, calculation and social mobility.

The last part of the book is dedicated to the comprehension of work and economic rationality. Yan Thomas ("Travail incorporé dans une matière première, travail d'usage et travail comme marchandise. Le droit comme matrice des catégories économiques à Rome", 201-225) stresses that Roman law often ignores processes like work. There is no high value set on work; it is calculated between raw material and the final product. Certain contracts isolate an action like work (location operae serviles). He also deals with leasing body and work as well as personal service and salaries and all aspects of work. The piece by Jérôme Maucourant, "Rationalité économique ou comportements socio-économiques" (227-240), is actually a synthetic conclusion of the book. He points out that in pre-industrial societies it was not all about maximizing profit but also about taking social interest into consideration. He underlines the aim of this research project to oppose the debate between modernism and primitivism as he summarizes the conclusions of all contributors.

All articles are accompanied by extensive bibliographies and there is a full index of sources as well as general and name indexes.

This book is an important contribution to the historiography of Roman economy. The authors thoroughly reexamine sources and open new dimensions of Roman attitudes towards the economy: mentality, the way of thinking and modes of action, objectives (both material and symbolic), making choices. Therefore, this book will be of interest not only to economic and ancient historians but to the many researchers who are dealing with structures of pre-industrial societies.