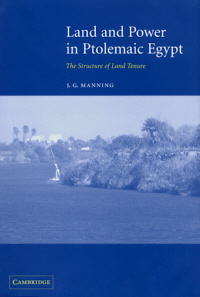 The ancient Egyptian state was a conglomeration of regions with distinct culture and traditions. The economical, political and religious institutions of Ptolemaic Egypt were a combination of old and new, Egyptian and Greek. Writing about this period of Egyptian history must include all inter-regional economical and religious connections. Perhaps this is one of the reasons why scholars tend to look away from Ptolemaic studies and rather concentrate on other periods.

This important study consists of seven chapters in three main parts: I. Issues and historical background, II. Regional case studies of land tenure and III. Interpretation. In chapter 1 (3-26) the author presents his aims, explaining issues and methodologies. He asks two crucial questions: (1) What was the relationship between central and local economic institution? (2) How did the power of the Ptolemaic state affect the organization of land tenure? Both questions center on the issue of state organization and power, especially one aspect of power which Manning, following Weber, call economic power. In contrast to earlier studies based on Greek sources Manning starts with demotic documents from Thebaid, that were rarely used before. Together with all sources for Ptolemaic agrarian history, author gives previous views and presents the structure of his study. Ptolemaic state itself as well as its antecedents is the focus of chapter 2 (27-61). Manning presents the connection between kingship, taxation and legal system through types of land and taxes. First he gives a geographical sketch of Egypt, stressing the importance of annual Nile flood and then he divides Egypt into three separate "eco-zones": the Delta, Fayyum and the Nile valley, later subdivided into Thebaid (from Aswan to Abydos) and Middle Egypt (north of Abydos to Memphis). This chapter also provides a brief historical overview of Thebaid and Fayyum from Pharaonic period to the end of New Kingdom as well as political history of Ptolomies.

The second part of the book consists of two chapters dealing with land tenure regimes. First (chapter 3, 65-98) Manning deals with conditions in Upper Egypt. Agricultural production was primarily organized in flood basins, separated by transverse dykes, allowing one crop per year. The first and very important source mentioned is Edfu donation text, cadastral survey of land in the southernmost four nomes. It was inscribed on the outer wall of the temple of Horus in Edfu during the first century BCE. The document appears to be a hieroglyphic transcription of an actual record from hieratic and demotic papyrus originals. In Appendix I (245-266) Manning offers an English translation of this inscription. Beside this document other sources are presented: Hauswaldt papyri and the Milon archive from Elephantine (for third century BCE), Adler Papyri (for second and first century BCE Pathyris / Gebelein) and one of the subchapter covers the Senpoeris affair (P. Amh. gr. 49 = P. Survey 56; W. Chrest. 161; Select Papyri II, 36; formerly P. Amh. 2,31), the case involving an Egyptian woman Senpoeris who illegally appropriated small amount of extra land to plant few more palm trees. A translation of this very interesting document is given in Appendix 3 (277-278). Chapter 4 (99-125) refers to land tenure regime in the Fayyum depression. The most important archive from the Ptolemaic period and the richest source for Ptolemaic agrarian history is the Zenon archive from Philadelphia (third century BCE). Together with Menches archive from the village of Kerkeosiris (120-110 BCE) Manning presents them as case studies, "model estates", demonstrating the categories of land and the strong and direct connections between Fayyum agricultural production and the capital.

Last three chapters are incorporated into part III of the book, "Interpretation". In chapter 5 (129-181) Manning is concerned with the "reach of state" and its ability to control land tenure and the surplus agricultural production. He presents the central structure of the Ptolemaic state, showing that from the point of view of the ruler, it was a household, an oikos. Further, following Michael Mann, he carefully distinct the four sources of social power (IEMP model) and assigns the documentary evidence for each of them. The author analyzes aspects of state power displaying all issues and debates. He argues that Ptolemaic state sought to impose an order on the Egyptian landscape and it was manifested in new economic institutions brought in from the Greek world. Discussing the "économie royale" he refers to P. Rev and P. Tebt. 703, indicating further the constraints on economic power and state claim to land. Manning carefully indicates the reasons for rural uprising, namely the revolt in the Thebaid between 207 and 186 BCE. He feels that it did not arise out of sense of "national" fervor. The causes of the rural unrest are difficult to establish, and there were probably many factors but underlying was general social disruption. He also questions the erosion of royal control and Rostovtzeff's view of Ptolemaic tradition of ownership of the land by the king. Egyptian tradition of private transmission of land is the theme of chapter 6 (182-225). It refers to social networks (family being the strongest "internal network" in villages) and status groups (based on ethnicity or identity) such as priests and soldiers. In both regions mentioned, knowledge of Greek was an instrument of Ptolemaic rule and was encouraged by a reduction in the salt tax rate for those who had the status of "Hellene". The main issues are property rights, presenting the Asyut probate dispute, conveyance of land, contracts of sale, giving a full example of typical demotic sale (P. Brit. Mus. IV.28, from Thebes, 208 BCE) and inheritance of land. Manning has convincingly argued that the "growth" in the amount of private property in the Ptolemaic period was only in new land and that there was no "erosion" of state control. Last chapter (226-241) summarizes Manning's conclusions. Often enough understanding of Ptolemaic socio-economic history essentially follows the "Polybius model" stating that Ptolemaic Egypt reached a period of success in the third century BCE followed by decline during second and first century. Author feels that the implicit treatment of Ptolemaic Egypt as a nation has been a barrier to the understanding of social process and change. So Manning offers a neoclassical model of Ptolemaic state because he believes that this model better explains the development of the state over the course of the three century. The neoclassical theory of the state suggests that the ruler exchanged with local elites protection and justice for revenue. So the author believes that economic power of the central state should be measured in terms of the success of the bureaucracy's ability to collect agricultural surplus. Largest part of the economy was no doubt the customary economy centered on grain production in irrigated basins. Internal revenue came from collection of rents on some classes of land (royal and kleruhic land), from taxing other classes of land, from the collection of a poll tax, called the salt tax, and from the collection of taxes on offices. Manning has argued in this book that the Ptolemaic bureaucratic system itself gradually displaced temples as economic centers.

There are three appendices in this book, first being translation of Edfu donation text, second one (267-276) Ptolemaic demotic land transfers from Upper Egypt, comprising 84 documents, and the third is a translation of P. Amh. gr. 49 (Senpoeris affair). An excellent bibliography and index of sources as well as general index and maps accompany the main study.

The author has tried to offer a coherent framework for understanding the Ptolemaic state and the structure of land tenure within a regional model. The royal system, driven by the need to fund bureaucracy, to supply Alexandria, and to enforce compliance of local agents, had high costs that had to be met through taxation. Manning successfully presents dissonance between economic aims of the regime -maximizing rent and tasks, minimizing risk - and realities of dealing with tenant farmers who had their own, ancient traditions of farming and expectations of landlord-tenant relationship. Manning's knowledge of the sources and pointing out to ongoing projects and forthcoming publications demonstrate that much deeper examining of Ptolemaic period must include demotic documents as well and makes this one of the most influential books in recent years.