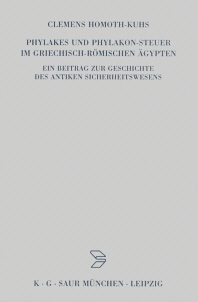 Discussion on state power and the difference between private and state affairs is always an interesting subject. Clemens Homoth-Kuhs presented a study on organization of security forces in pre-modern society, namely Ptolemaic and Roman Egypt. It offers clear and manageable insight into 277 documentary papyri and ostraca concerning phylakes and gives chronological framework.

In a brief introduction (1-6) the author explains his methodological approach, aim and presents earlier works dealing with similar subjects. [1] Every group of phylakes will be presented by their status, their role, hierarchy and wages. Special parts will be dedicated to liturgy and phylakon tax. There will also be given a prosopographical note on certain individuals.

The next chapter is "Phylakes in ptolemäischer Zeit" (7-29). Homoth-Kuhs systematically introduces 23 documents (22 papyri and 1 ostracon), ranging from III to I century BCE and unevenly geographically distributed. In Ptolemaic period one can distinguish both private and state security forces. Certain phylakes were guarding private fields and gardens, escorting caravans, apprehended culprits. One of the documents, P. Sorb. I 34, gives evidence for protecting a transport of juniper oil. Judging from P. Tebt. III 893 and P. Tebt III 894 Frg. 8 col. I their wages were 500 or 600 drachmas.

Romans modify to some extent already established system of law enforcement, both private and state. Earliest source is P. Oxy IV 803 (end of I century CE), but it is fragmentary. First document mentioning phylakes as state police officers, P. Soterichos 28 is dated to 91 CE, but the first reference for phylakon tax (P. Bad. IV 108) is from 57/58 CE. The documents concerning phylakes extend to III century CE. Homoth-Kuhs collected 107 documents from the Roman period and 148 sources on phylakon tax and systematically divided them in four groups (and tables): metropolitan phylakes, village ones, phylakon tax and private phylakes.

First part is dedicated to metropolitan phylakes (40-87). Out of 38 different documents, 18 are from Oxyrhynchites, 6 from Arsinoites, 4 from Apollonopolites Heptakomias, 2 from Hermopolites and one from Herakleopolites. The majority is dated from II to IV century CE. The author gives thorough analysis of their liturgy, organization and hierarchy. Office tenure regularly lasted a year. A strategos was highest in command, and they were attached to certain part of town. A group was led by archiphylax and they were guarding the streets, people, public buildings, water. P. Oxy I 43 verso (295 CE) gives remarkable, clear duty plan in Oxyrhynchus: 40 phylakes stationed in respective streets, a group of 6 is in Sarapis temple, one phylax in Isis temple, one group of 3 in theatre, 2 phylakes in gymnasium, one group of 7 in Thoeris temple and one phylax by "little Nilometer"; all together 60 phylakes on approximately 6000 houses and 36000 inhabitants in III century Oxyrhynchus. [2] They were also performing police duty; arrests, looking for wanted men as well as guarding transport and doing currier duty. Homoth-Kuhs offers a remarkably detailed prosopography table (82-86) out of 34 documents.

Next chapter (88-148) deals with phylakes kômês and gives somewhat different perspective. The hierarchy here was different: phylakes kômês were responsible to village officials, dêmosioi kômês, and under direct command of archephodos. They also participated in collecting taxes and customs. The author gives a detailed list of all attested "village" phylakes with their obligations: e.g. nomophylakes, nyktophylakes, pediophylakes, magdophylakes, eirenophylakes, halonophylakes, genematophylakes and many others. [3] They were also certain officials specialized for looking over water transport and irrigation system (potamophylakes) as well as guarding the river banks (aigialophylakes). Police duties were more or less the same as in the metropolis. They also controlled post transport as well as transfer of vegetables from one village to another. Office tenure comprised one year, same as metropolitan phylakes. P. Petaus 74 offers an insight into division of these officials: 1 archephodos and 4 phylakes on 300 inhabitants; as table on page 114 shows the average proportion between phylakes and population in villages is from 1:50 to 1:130. The author also presents systematical official list of village phylakes with all necessary data. Similar prosopographical table is repeated in this chapter.

Duty of phylax was a liturgical service. The method of nomination (by komogrammateus) was a complex one so that an adequate person was to be appointed. Nevertheless, anachoresis was one way to avoid the service. Certain privileges, as free wheat or an extra amount of money for their upkeep, were also attested. Among phylakes were both Greeks and Egyptians, from cities and villages alike.

As said before, first receipt for phylakon tax is dated to 57/58 CE and is from Upper Egypt. Homoth-Kuhs presents 104 dated ostraca, from 58 to 165 CE (149-192). Documents state the name of tax payer and his part of town in genitive, date and tax amount. Geographical and financial variability of yearly payments gave Homoth-Kuhs an opportunity to suggest a possibility of paying in installments. That would indicate an existence of flexible tax administration, able to respond to market demands. This subject is open for further research and could give new evidence for Roman fiscal structure, both in Egypt and the whole Empire.

There are 31 documents on private phylakes in Roman period (192-211), mostly letters and receipts. They performed similar duties as in Ptolemaic period, mostly watching over private estates and crops, mostly olives and wines. They also participated in protecting private caravans or currier duty. Their monthly wages were around 12 to24 drachmas.

Homoth-Kuhs presented his summarized conclusions in the final chapter (212-216). There are also source index and register (217-221). Alas, no complete bibliography is given separately.

Every statement in this book is followed by extensive source quotations and all subjects are thoroughly analyzed. Clemens Homoth-Kuhs showed amazing comprehension and interpretation of sources and this study will be a starting point in the years to come.

[3] All officials' titles are meticulously translated into German.