K. J. Kesselring: Mercy and Authority in the Tudor State 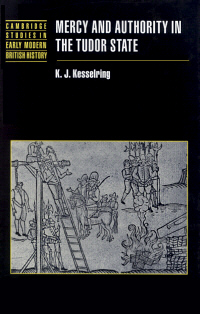 This absorbing book picks up on the extensive literature and debate, sparked by the publication of Albion's Fatal Tree [1], about the role of mercy in the exaction of deference and obedience in seventeenth and eighteenth-century England. Hay had noted that eighteenth-century England had developed an increasingly bloody penal code, resulting in many trials but, paradoxically, few executions. The drive to law enforcement, he concluded, and its selective suspension through the use of pardons, tended to strengthen elite control and to legitimize the state's authority; but concurrently communal norms and public expectations surrounding justice and mercy also shaped the use of pardons and the exercise of power. In her introduction, Professor Kesselring reviews this debate and shows how its perspectives can be applied to the Tudor period, on which 'the new legal history' has hitherto occasioned little comment. She concludes that Hay's central insight also holds true of the earlier period.

The meat of the book consists of five chapters developing different aspects of the problem. Chapter 2 looks at the intensification of state power and the rule of law through the introduction by statute and proclamation of new offences, different forms of punishment, and greater means of enforcement. At the same time, however, strict justice was mitigated by constraints imposed by communal norms and the broad participatory base of governance. The Tudors needed to temper justice with mercy so as to keep executions at broadly acceptable levels and to secure local co-operation. Accordingly, as the next chapter demonstrates, pardons became more frequent. Kesselring calculates (74) that recorded pardons on the English patent rolls rose from 41 per annum under Henry VII to 109 per annum under Elizabeth as the Tudors sought to mitigate the rigours of the growth of state power. It might be thought, however, that the geographical spread of pardons (Londoners acquired 18% of pardons, Cumberland less than 1%; 77) reflected not just concentrations of population but the greater effectiveness of government in the capital. To qualify for a pardon, however, a convict generally had to show penitence and deference to authority. Tudor monarchs, as chapter 4 argues, were more likely to pardon perpetrators of unpremeditated or inadvertent crimes but also those who could afford to pay. And since few bureaucratic procedures existed for bringing deserving individuals to the crown's notice, successful petitioners were those more able to harness informal networks of influence, so bringing hierarchies of dominance and deference into play.

The Tudor response to pleas for mercy is considered more carefully in a chapter on public performances of pardon. The Tudors used public executions and other punishments as a deterrent, to admonish others and to display the penalties attending disobedience. Even the condemned were expected to play their role by making appropriate 'scaffold speeches', admitting their crimes and displaying remorse - and, apart from religious offenders, generally did so. Conversely, staged pardons - especially those proclaimed at the scaffold - helped monarchs to craft public demonstrations of their princely clemency. In this way, they responded to the broad cultural demands that a legitimate ruler embody both justice and mercy. Indeed, some pardons derived from the crown's need to placate public sentiments: audiences, too, had a certain power. A final important chapter examines to good effect the most dramatic instances of pardon, those proffered during the major rebellions of the period when, for the crown, pardons implied acceptance of guilt and legitimate authority, and for protestors could be used to negotiate concessions. The primary sources on which the study is based are predominantly the records of the central administration, and the author also demonstrates an impressive command of the wider secondary literature on crime and public order in early modern England.

Despite the book's origins in a doctoral thesis on mercy and authority in Tudor England, some effort has also been made here to introduce relevant matter from the New British History so as to lift the discussion above arguments about English exceptionalism. (There are also a few references to work on early modern France, but generally the study ignores the continental literature on state formation.) In the introduction, for instance, Professor Kesselring highlights as aspects of Tudor state formation both the statutes of 1536 and 1543 which arrogated to the king alone the power to pardon in Wales and the English liberties and also the implications of the 'surrender and regrant' procedure for Tudor Ireland. Pardons could thus be used to assist processes of territorial expansion or centralization. And in explaining the less successful use of pardons in Ireland and the Anglo-Scottish borders, the author very fairly remarks that mercy relied for its effectiveness on a credible threat of force which was frequently lacking in these districts. Nonetheless, talk of "the forms and conventions of Tudor rebellions" (164) presupposes one Tudor political culture which would, in theory, underpin "a common set of conventions and range of possibilities" in regard to the proffering of pardons (186).

Certainly, Tudor monarchs tended to act as if this was the case, but the reality was otherwise. Like most European monarchies of the period, the Tudor state was actually a composite state with long landed frontiers to rule and defend. And in the predominantly pastoral, marcher societies of the early Tudor North, Wales and Ireland, different conventions prevailed. Such customs might well be denigrated as 'brute and beastly' but the Tudors had, in the short term at least, to accept them. In the aftermath of the Simnel conspiracy, for instance, the lords and council of Ireland flatly refused to give financial bonds for their pardons, so forcing Henry VII to grant general pardons in return for mere oaths of allegiance. [2] In the longer term, however, the Tudors strove to override local customs and to impose the norms of lowland England on these disparate territories which they seldom visited, in a bid to promote 'English civility'. To some extent, they were successful, as Professor Kesselring shows. Yet, arguably, what the evidence really shows is that the pressures for conformity, the extension of the rule of law, and the territorial expansion of the state simply replaced the inherited pattern with new ideological forms of dissidence. The author notes the refusal of religious offenders to play the role expected of them (148), and also Elizabeth's unwonted reluctance to extend mercy during the Northern Rebellion of 1569 (185); but this pattern was replicated more generally in Elizabethan Ireland where, for instance, many of those condemned for the Nugent conspiracy died unrepentantly.

This qualification notwithstanding, however, this is an important and well-crafted study, written in a lively style, which repays careful reading. It offers many new insights and its findings also have significant implications for the wider discussion concerning crime and public order in seventeenth and eighteenth-century England.