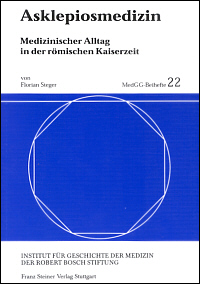 For many years overshadowed by the Greek miracle, the history of medicine in ancient Rome has recently attracted considerable attention in its own right. But despite many scholarly articles, general surveys have been few, not least in German, where Antje Krug's "Heilkunst und Heilkult" has reigned supreme as a short account of a huge subject. [1] Florian Steger's "Asklepiosmedizin" now offers a new survey that covers both more and less than its title implies.

It is divided into three sections. The first sketches the history of medicine in the Roman world, from the third century B.C. onwards, and discusses both theories and practitioners. The second discusses the cult of Asclepius, its origins, its sites, and its patients, paying special attention to the literary Orations of Publius Aristeides and the cure inscriptions set up at Epidaurus and Pergamum by two near contemporaries, Iulius Apellas and Aelius Theon. The final, much shorter section offers reflections on the cultural context of Roman medicine, both in its relationship with Oriental and earlier Greek medicine, and in its influence on medieval medicine. There is a brief introduction and an even briefer conclusion.

The level of scholarship is high, the arguments clear and well set out, the annotations plentiful. In short, this is a very solid survey which provides a sound orientation and a relatively sure base for further study.

But, at the same time, there are major weaknesses. Steger has been unlucky in his timing, for he has been able to include little published after 1999. So many of his theoretical, anthropological reflections will seem oldfashioned to those familiar with the studies of Helen King, or with Rebecca Flemming's "The Making of Roman Women". [2] The studies of the archaeological evidence for medicine in Austria (Rupert Breitwieser) and Britain (Patricia Baker, Audrey Cruse) have shown how much more can be gleaned from even familiar archaeological evidence. My own "Ancient Medicine", deliberately sets out to challenge many of the assumptions of traditional historians of medicine, and I am pleased to see in how many places Steger and I agree. [3] But the older guidelines still constrain Steger, with the result that he misses many opportunities to develop his insights.

The weakest section, paradoxically, is that on Asclepius and Asclepius cult. What is here said is thorough and soundly based, although knowledge of the work on the identification and interpretation of Asclepius sites by Alessandra Semeria and by Maria Elena Gorrini would have suggested new ways of approaching the archaeological evidence. Similarly, Fridolf Kudlien's 1981 study of the 'Gebildetenreligion' of Galen would have given a new dimension to the discussion of patients' attitudes to the Gods. But Asclepius cult is here studied almost in isolation from the society around it, despite the work of Christopher Jones, Robin Lane Fox, and, above all, Louis Robert. No student of Asclepius cult can afford to neglect Robert's magisterial exposition of the 'New Asclepius', Alexander of Abonuteichos, in his "A travers l'Asie Mineure", which uses literary, epigraphic and archaeological evidence to reconstruct attitudes to Asclepius in the middle years of the second century A.D. [4]

Robert's account also shows up the paradox in the title. While many doctors were supporters of Asclepius, and, as Steger rightly notes, there was relatively little opposition between religious and non-religious healing, 'Asklepiosmedizin' was not the only form of religious healing available (although its shrines may have been among the richest). As Steger himself points out, there were many other healing cults, some with similarly detailed 'aretalogies' of healing. Sites like Bath or Faimingen attracted pilgrims from hundreds of miles, to say nothing of imperially favoured healing cults like that of Isis and Sarapis. To focus on Asclepius cult alone is to misunderstand the wider relationships of medicine and religion in the ancient world.

Similarly, despite a nod in the direction of magic, both it and astrology (a word that does not appear in the index) could have been brought further into the discussion of the alternatives to rational healers. Closer attention to Meissner's study of 'Fachliteratur', included in the bibliography, could have also suggested new insights into the way in which some doctors sought to make medicine into a profession. [5]

These criticisms, however, should not obscure the undoubted merits of this book. Its detailed, careful scholarship, with its attention to the social background of Roman healers, provides the general reader with a generally sound account. It summarises accurately for a general audience much of the work done over the late two decades. This is both its strength and its weakness, for it lacks the excitement of truly ground-breaking research, and marks an end more than a beginning. But those who put their trust in Steger will rarely be misled or misinformed, and they will gain considerably in their understanding of medicine in the Roman world.

[2] R. Flemming: Medicine and the Making of Roman Women. Gender, Nature, and Authority from Celsus to Galen, Oxford 2000.